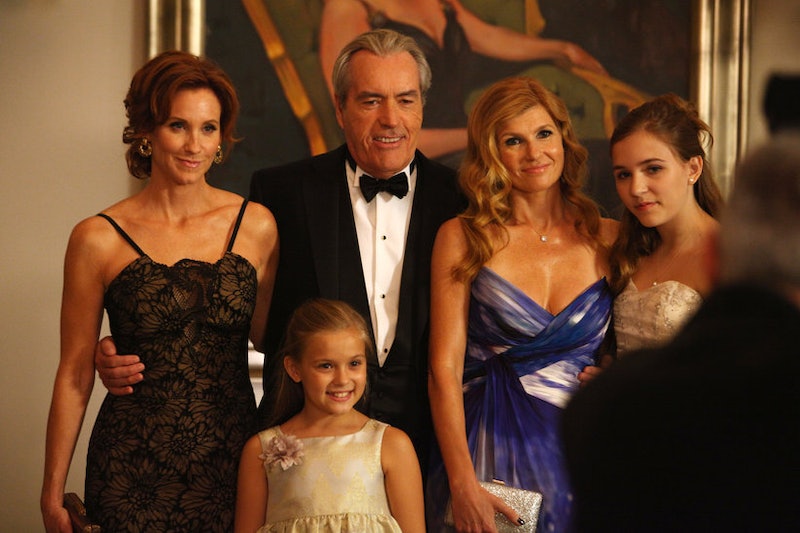 Fall TV season is about to kick itself into high gear, which means you’ve had well over three full months of summer to completely forget everything you probably still need to know about your favorite returning shows. Take ABC’s Nashville, for example. You may recall the general gist of how things were left during the Season 2 finale (i.e. both Luke AND Deacon proposing to Rayna; Juliette’s rocky relationship with Avery; Will finally coming out of the closet to Layla). But can you remember how it all got to that point? Well, just in case you’re feeling a little fuzzy on some of the details, I'm here to help you out of this situation by recapping the major events that went on with several of the show's main characters throughout last season. That way you’ll know exactly what you’re walking into when Nashville ’s third season kicks off on Sept. 24.

Of course, some people may prefer to refresh by watching a few episodes over again or even catch up completely online. But if you don’t have that kind of time on your hands, then feast your eyes on all the deliciously dramatic details below. But prepare yourselves, y’all. These country crooners have quite a few skeletons in their closets.

Rayna wakes up in the hospital after the Season 1 finale car crash to discover that she’s been in a coma for two weeks. But her emotional injuries far outweigh her physical ones as she resigns to cut Deacon out of her life for good. Instead, she focuses on launching her new label Highway 65. There's just one problem: she doesn’t get along with Edgehill’s new chief and shrewd businessman Jeff Fordham. This eventually results in Rayna buying her way out of her contract and putting all of her time (and money) into her own label.

She also develops a budding romance with country megastar Luke Wheeler throughout the season, who proposes to Ms. Jaymes on stage during her successful album launch. She appears to happily accept, though that doesn’t stop her from kissing Deacon back when he pays her a visit later that same evening. He too proposes, swearing that things will be different this time, and tells her to think it over.

With a busted hand from the accident, Deacon fears his music career might be over, which would probably be much more upsetting to him if he wasn't plagued with so much guilt over what happened to Rayna. But, like with most things, time heals all wounds, both physically and mentally. He begins dating a lawyer named Megan and even decides to become a solo artist once his hand gets fully healed. Maddie becomes a major presence is his life as well, now that she knows he's her real father. The two of them grow very close throughout the entire season — due in large part to their mutual love of music. This allows Deacon the chance to try and make amends with Rayna. So when Deacon eventually dumps Megan (after she cheated on him with Teddy!), he decides to propose to his one true love, Rayna, in the finale.

Juliette finds out what it's like to walk a mile in Rayna's boots when she slowly starts to get edged out by Jeff's young new artist, Layla, who completely steals Juliette’s thunder and tween demographic. But the rivalry between these two country divas doesn’t end there. Layla eventually grows tired of Juliette's belittling, prompting her to leak Juliette’s affair with a married man to the press. Now plagued as a homewrecker, Juliette finds herself dropped from Edgehill. The one upside to this? It lands her in the comforting arms of Avery, which evolves into a full-blown relationship.

Rayna agrees to let Juliette join Highway 65, helping to further mend her public image. However, after overhearing a private moment between Scarlett and Avery, Juliette misreads the situation and gets so jealous (and drunk) that she ends up sleeping with Jeff, of all people, who threatens to tell Avery if she doesn’t comeback to Edgehill. But for once, Juliette takes the high road and decides to come clean to Avery herself. But she was too late. Gunnar, who had seen her and Jeff together that evening, already told him. Avery is understandably heartbroken, leaving the future of their relationship unclear.

Unsurprisingly, Scarlett rejects Gunnar’s marriage proposal from the first season finale, which results in the two of them breaking up. Her music career, on the other hand, has never looked brighter. Not only does she sign on as a solo artist for Rayna’s record label, but she also gets asked to go on tour with Luke as his opening act. But it turns out tour life is a lot more stressful than Scarlett thought. She starts to feel stressed and overwhelmed, which leads her to start taking uppers (courtesy of Liam).

This behavior backfires when her mother comes to visit on tour. Terrible memories of her abusive upbringing are brought to the surface, which — when coupled with excessive amounts of drinking and taking pills — result in her having a complete mental breakdown on stage. In the end, she decides to leave not only Rayna’s label, but Nashville in general, in the hope of going back to school. However, Gunnar serenades her with a song that he wrote before she goes, so she may end up reconsidering.

Will gets signed to Edgehill while doing all he can to keep his sexual orientation a secret. After a little coaxing from Jeff, he decides to start dating Layla for publicity purposes. (Those tweens do love their ‘ships!) However, Will continues to struggle with hiding his homosexuality, which almost leads to him committing suicide. Convinced that he can “fix” himself, he proposes to Layla. They get married soon after and sign on to do a reality show about their relationship. (You know, because when you’re hiding a major secret about yourself, the first thing you want is have a bunch of hidden cameras around.) Unfortunately, poor Will is about to find that out the hard way. Because when he finally gets up the nerve to tell Layla that he’s gay, we see that there’s a hidden camera in their bedroom (which is not supposed to be there) that’s recording the entire conversation.

Once his divorce with Rayna becomes finalized, Teddy decides to rekindle his relationship with Peggy, who he believes is pregnant with his child. This eventually leads to him proposing — mostly in order to avoid a scandal during his senatorial run. (Romance!) So of course, he’s completely unaware that Peggy has miscarried and is now faking her pregnancy — a foolproof plan, btw.

However, Peggy knows she can’t keep the charade up forever, so she fakes a miscarriage soon after the wedding. She later gets shot and killed by a man who was aiming for Teddy. Suspicious that Lamar was behind this, Teddy looks into the shooting and realizes that his former father-in-law thought he was the person who ratted him out to the feds and got him arrested. But after discovering that his daughter Tandy was behind the betrayal, Lamar has a heart attack and dies right in front of Teddy, who does nothing to help.

After spending some time wallowing in self pity over Scarlett's rejection, Gunnar starts to get out of his funk after meeting his ex's longtime friend, Zoey, who becomes his new writing muse. They eventually start seeing each other in secret, but when Gunnar joins Luke’s tour as a songwriter, Scarlett soon catches them in the act and becomes very upset. In time, the two of them are able to patch things up, so when he hears Scarlett's thinking about leaving he composes a song in the hopes it'll change her mind.

As for what happens next… we'll just have to wait and see!