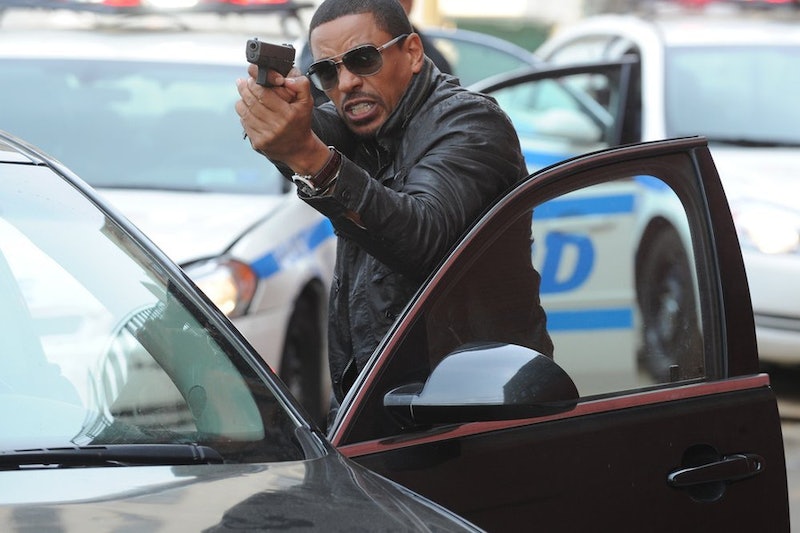 Laz Alonso has one of those weirdly familiar faces; I recognized him from Jumping the Broom, one of the strangest and somehow weirdly entertaining romantic comedies of the last decade. It's a haves and haves-not kind of movie that brings together a bride with some of the most bizarrely bougie black folks cinema has ever seen (at one point Angela Bassett brags about her great-great-great-grandparents owning slaves) and a more reasonable down to Earth groom played by Alonso. Since then, he's has appeared in several other films and this fall, Alonso will be joining Debra Messing on The Mysteries of Laura. He plays, Billy Sands, the police officer partner to Messing's Detective Laura Diamond.

It seems like Billy will provide more of the cop drama side of the show, while Laura tries to balance work as a homicide detective with her personal life, which involves both raising her two children and managing her divorce from a fellow officer. And I don't think Alonso will have any trouble holding his own besides TV veteran Messing. Here's a rundown of all the things that will make Alonso one of your favorite TV stars as soon as The Mysteries of Laura premieres.

Behind the scenes pics, selfies with Ms. Messing herself, and lots of pictures of New York City make his Instagram a worthy follow.

While their relationship is strictly professional at the moment, workplace shows are notorious for pairing off once-platonic characters. And an interracial relationship would boost the show from typical procedural to something unique — the show is already addressing the line between work and family, why not also incorporate the struggles of dating someone who's not just a coworker, but also culturally dissimilar?

He not only does commercials for brands like American Airlines and Lexus, he also does plenty of charity events to give back.

He Can Deal With Awkward Moments

While at an event promoting The Mysteries of Laura with Debra Messing a few days ago, Messing inadvertently made awkward racial implications when tossing off the idea that she was nervous handling a prop gun while Alonso was more comfortable than she because "I mean, look at him. He’s played roles where he’s carried guns a lot." Of course she probably meant that he looks young, cool, and tough. But Alonso was able to joke the comment away without letting it seem like his skin color made it a natural assumption that he'd be holding a weapon. He's got tact.

He's a Game of Thrones Fan

He retweeted a quote from Stannis Baratheon. Yes, it's a slightly odd choice for a retweets as it's something that Stannis said when attempting to take over the entire kingdom, but that aside, I can get behind a guy who's Team Stanny. That's proof enough — Alonso is cool by me.