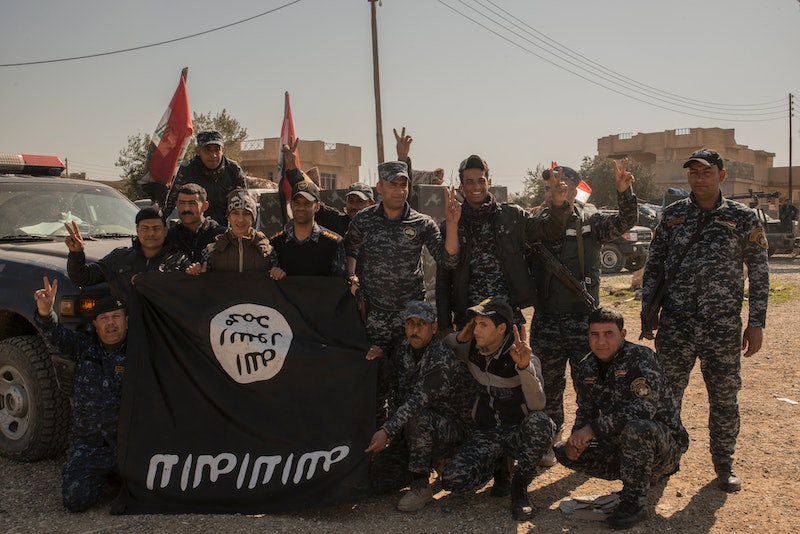 Last week, President Obama said in a statement that he would "degrade and ultimately destroy" the Islamic militant group overtaking vast swaths of Iraq and Syria. In response to the pledge, ISIS released a Hollywood-style trailer called "Flames of War" late Tuesday, indicating what steps the jihadists would take if American forces were deployed.

The 52-second video begins with a series of combat explosions, edited with quick cuts and slowed down, then moving to a group of apparently American soldiers carrying one of their wounded. The "trailer" is peppered with footage of George W. Bush's "Mission Accomplished" banner from 2003 and clips of the president and the White House.

In a clear message to the U.S., there is audio of Obama vowing, "American combat troops will not be returning to fight in Iraq." A split-second clip of a group of militants that appear to be preparing to shoot a group of men on their knees. It fades to a title screen, flashing the words, "Flames of War: The Fighting Has Just Begun," and finally ends with a cinematic "Coming Soon."

The high-production video has a weird Hollywood-style quality to it, with flashy explosions, quick-moving narrative, and even including a pseudo-production company at the beginning.

This is not the first time that ISIS has been compared to Hollywood. They've long been noted for their media literacy and recruitment tactics that are clearly meant to appeal to Western audiences.

Earlier this year, ISIS released a video called "The Clanging of the Swords IV," which included more of the slow-motion bombing seen in "Flames of War" and shots done through the crosshairs of a sniper rifle.

It's sad that we need to breathe a sigh of relief about this, but the video, fortunately, does not show any direct violence toward hostages. In the past month, ISIS has released three videos of beheadings, including two Americans.

The video comes hours after Gen. Martin Dempsey, chairman of the Joint Chiefs of Staff, briefed the Senate Armed Services Committee on the administration's military strategy in Iraq and Syria. Although the U.S. will be sending troops to Iraq, it will only be in an advisory role to Iraqi troops, helping them organize against ISIS. Dempsey added that — if necessary — he would recommend that American troops accompany the Iraqis for "attacks against specific ISIL targets," although presently he did not see a need for such involvement.