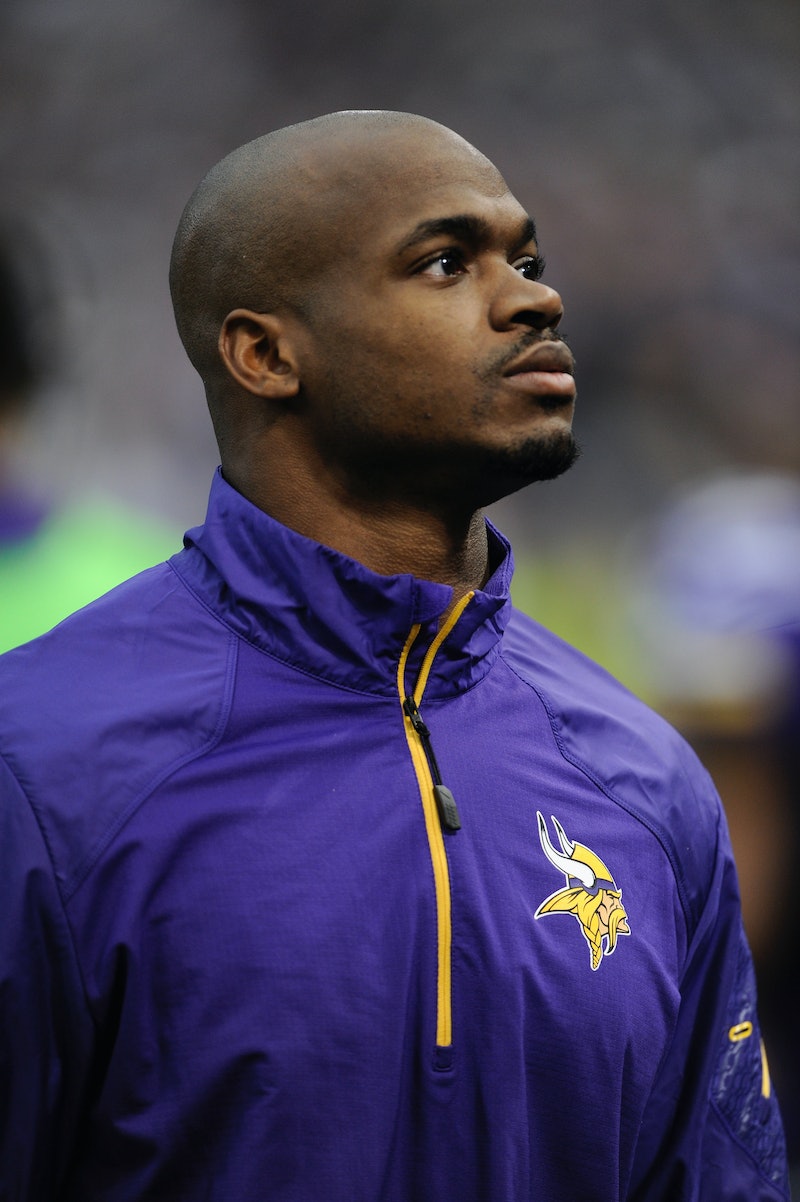 Early on Wednesday, the Minnesota Vikings released a statement saying that they were deactivating Adrian Peterson indefinitely, suspending him from all team activities while his felony child abuse case is being settled. The Vikings received a lot of rightful criticism for reinstating Peterson after a short-lived deactivation announced on Friday, which came after his indictment. On Wednesday, Nike also dropped Adrian Peterson. "Nike in no way condones child abuse or domestic violence of any kind.... We have suspended our contract with Adrian Peterson," they said in a statement, according to CNBC.

Peterson was indicted last Thursday for allegedly spanking his 4-year-old son with a tree branch. He was arrested and held in his home state of Texas. He's set to be arraigned on October 8, and faces up to two years in prison if found guilty.

The 180-degree turn came amid crowd and sponsor outrage at Peterson's reinstatement on Monday. The Radisson hotel chain suspended its sponsorship of the Vikings amid the charges, noting the family-owned business' commitment to children. The company said in a statement:

Radisson takes this matter very seriously, particularly in light of our longstanding commitment to the protection of children. We are closely following the situation and, effective immediately, Radisson is suspending its limited sponsorship of the Minnesota Vikings while we evaluate the facts and circumstances.

The NFL has landed itself in a PR firestorm as of late, with Peterson's indictment coming shortly after renewed outrage about Ravens' player Ray Rice's domestic abuse charges. NFL official beer sponsor Anheuser-Busch finally felt compelled to call out the league on its recent mishandlings of abuse charges.

We are disappointed and increasingly concerned by the recent incidents that have overshadowed this NFL season. We are not yet satisfied with the league's handling of behaviors that so clearly go against our own company culture and moral code. We have shared our concerns and expectations with the league.

After re-deactivating (phew, who can keep up?) Peterson, team owners Zygi Wilf and Mark Wilf released this statement Wednesday:

Today's decision was made after significant thought, discussion and consideration. As evidenced by our decision to deactivate Adrian from yesterday's game, this is clearly a very important issue. On Friday, we felt it was in the best interests of the organization to step back, evaluate the situation, and not rush to judgment given the seriousness of this matter. At that time, we made the decision that we felt was best for the Vikings and all parties involved.

To be clear, we take very seriously any matter that involves the welfare of a child. At this time, however, we believe this is a matter of due process and we should allow the legal system to proceed so we can come to the most effective conclusions and then determine the appropriate course of action. This is a difficult path to navigate, and our focus is on doing the right thing. Currently we believe we are at a juncture where the most appropriate next step is to allow the judicial process to move forward.

We will continue to monitor the situation closely and support Adrian's fulfillment of his legal responsibilities throughout this process.

I wish that this string of events didn't have to happen in order to give the NFL the wake-up call it so desperately needed. But, with fans and sponsors banding together in outrage, maybe they'll be forced to treat their players like punishable citizens rather than football gods.

More like this
The Lionesses Are Calling For Equal Access To Football In Schools
By Sophie McEvoy
The 12 Best US Open Tennis Outfits Of All Time
By Avery Matera and Dominique Norman
Lewis Hamilton Turned Down A Role In 'Top Gun: Maverick' For This Surprising Reason
By Darshita Goyal
Serena Williams Is Retiring From Tennis: “I'm Ready For What's Next”
By Marina Watts and Grace Wehniainen
Get Even More From Bustle — Sign Up For The Newsletter