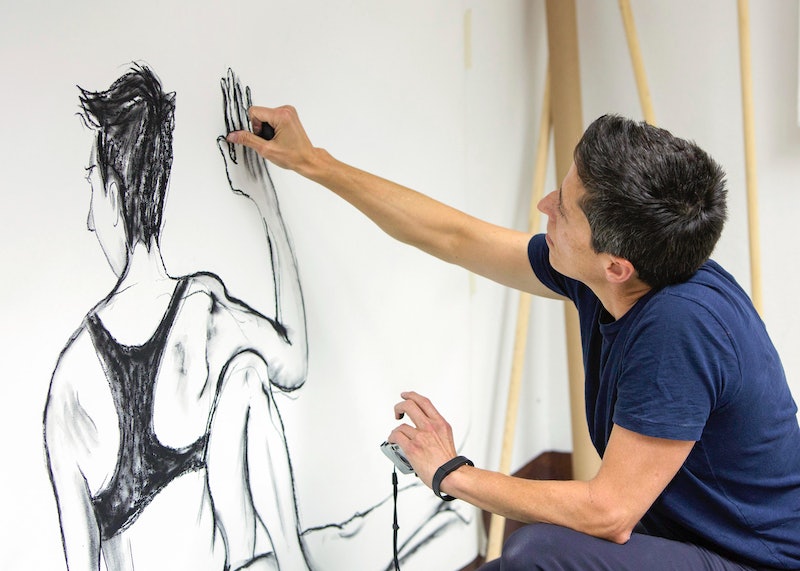 It's difficult to know exactly what you should call Alison Bechdel. She's a cartoonist, a graphic memoirist, a writer, an artist, a feminist, and now — officially — a genius. Alison Bechdel won a MacArthur "genius grant" Wednesday, an award that to many fans of her graphic memoirs Fun Home and Are You My Mother , is certainly well-deserved, and perhaps even overdue. The MacArthur Fellowship comes with a $625,000 cash prize, which if it's used to pursue her work, can only mean great things for those of us who love to read it.

If you don't know Bechdel for her graphic memoirs, then perhaps you know her for the Bechdel Test. Originally proposed in her iconic comic strip Dykes to Watch Out For in 1985, the Bechdel Test consists of three simple questions you can ask yourself the next time you're watching a movie:

If the answer is yes to all three questions, the film passes the test. Sadly, movies rarely do: Just 15 percent of the top 100 films released last year featured women in lead roles. And only 30 percent featured women with speaking roles. The Bechdel Test is an easy way to keep talking about that injustice.

Bechdel took the time on what was surely a very surreal day to speak to Bustle about being named a MacArthur Fellow, The Bechdel Test, and what she's working on next.

BUSTLE: Congrats on being named a Macarthur Genius!

Where were you when you heard?

I was — I still am — in Italy, where I’m doing an artist residency. I’ve been over here for six weeks so I was in my studio drawing when the call came.

Does it feel weird to be called a genius?

It feels totally weird. I know that the MacArthur people don’t officially endorse that term. I think maybe they have a quota for one non-genius every year, so they can deny that it’s really a genius award. And I think I got it this year.

Well, I disagree. So, I wanted to know a little about your process — do you write first and then draw? Do you draw and write at the same time?

I kind of write and draw at the same time. I love words, I love the act of writing, but it’s hard for me to really do writing without pictures. So write in Adobe Illustrator on the computer, which is a drawing program, and that allows me to think in this two-dimensional way. I’m not just writing lines of text like you would on a word processor, I’m actually mapping out a page, writing dialogue and narration and pasting in little images or photographs. I’m making a sketch, that I will later print out and draw manually.

And what you’re doing in Italy right now is larger format?

Yeah, well I use my time here to sort of — I don’t know, cut loose a little bit. The work I do is so … it is very small. I draw very small, I draw in a very controlled, planned-out way and I would love to be a little more spontaneous. So I let myself here, just sort of do some exercises along those lines, and draw on a much, much larger scale; trying to draw just freehand with no sketching or planning.

You talk about your work being small and controlled. I was wondering if you ever have something you always wished you could write about but feel like you can't.

No, [laughs] not really. Although I do feel like I’m changing gears right now. I have been doing such cerebral and interior work and now I’m writing a book about the body. It’s still a memoir, but it’s about exercise and how we learn things through our body, so doing these big life-sized drawings is sort of preparation for doing that in that book.

That’s really cool. What inspired you to write about the body instead of the mind?

You know, I’ve always been a sort of secret exercise freak. It’s sort of like my survival technique, it’s how I calm myself down. So it’s not a departure for me personally, but I certainly haven’t talked about it much. I’m interested in stuff that doesn’t get processed through our symbolic brains, you know — like how with your body you’re just doing things, you’re feeling things, experiencing things, and learning to trust yourself — and I just think that’s interesting. I want to explore it.

That sounds great. I’m excited to read it. So, I wanted to ask you about the Bechdel Test, which is iconic at this point. Have you watched any movies recently that passed the test?

Huh. I always fumble these kinds of questions because I don’t see that many movies.

How about, are you surprised by how much it’s caught on?

I am very surprised. I mean, this was just some little off-handed joke I made in my lesbian feminist comic strip, like, 30 years ago. It was funny to this little avant garde feminist group, but no one else thought — it seemed crazy to other people. Like, of course movies are all about men. It’s mind blowing that it’s become this mainstream gauge. A lot of the young people who I meet, that’s how they know me because of the Bechdel Test, not through my cartoons.

Has anything struck you about how feminism is changing over the last couple decades? Anything you find encouraging or find discouraging?

I don’t ever feel disappointed by younger generations of feminists. I feel continually amazed at the new takes people keep evolving toward feminism. I feel very heartened by the evolution of feminism and by the twists that each new generation finds to put on it.

How do you deal with partners or family potentially being angry with things you’ve written about them?

Well, I try really hard to have an open process with anyone I’m writing about. My first memoir was about my father who was dead, so I couldn’t really involve him, which was very freeing. But since then, I’ve written about my mother; I wrote about my mother while she was still alive. I showed her stuff, I made sure she was okay with that. With friends or lovers, I show them what I’m thinking of doing and make sure that they’re okay with it.

Do they get veto power?

Yeah, yeah. If they’re uncomfortable, I will change stuff. Or there’s always the possibility I can make someone unrecognizable, change their appearance, change their names. That’s not to say that people aren’t angry at me. I think that’s always a little bit of a problem. [But] it just feels important to me to do it, to keep trying to write about my life and to have an open honest process about it.

Why is it important to write your own life?

I guess because I grew up in a family where there was so much secrecy about really important things, and I don’t want to live like that. And maybe I’ve gone too far in the other direction, you know [laughs] you don’t have to tell everyone everything. There’s a medium point but I haven’t quite found that medium point yet, I guess.