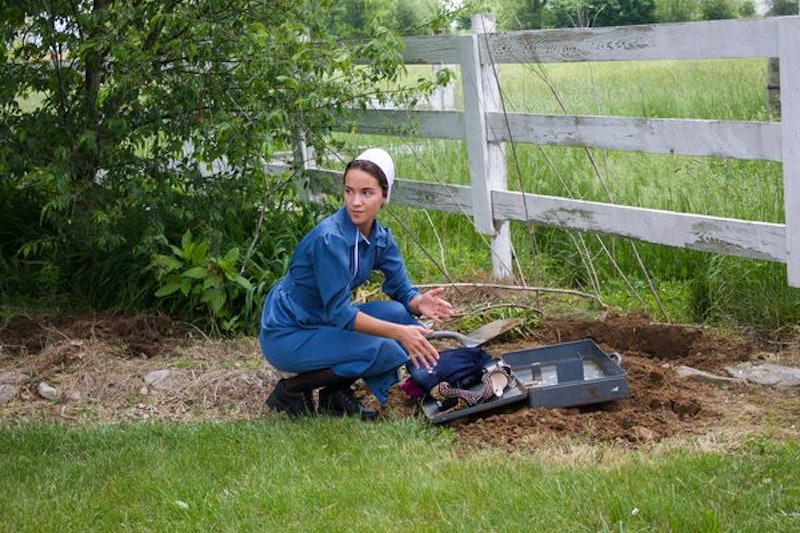 If you're like me, you've been enthralled by TLC's series devoted to Amish teenagers experiencing the outside world. But the real question the show poses is what happens when the cameras shut off? For instance, is Breaking Amish Season 3 's Barbie still dating her boyfriend? In her intro clip, the cast member introduces herself as a preacher's daughter whose family specifically settled in Mumfordville, Ky.'s Amish community for its strictness. Barbie clearly evokes a desire for freedom and independence, so it's easy to assume that she might be intoxicated by the bright lights of the big city in this season's New York excursion.

The Wrap reports that Barbie faces intense community pressure to settle down with her longterm boyfriend and get married. While the internet is mum so far about how the season plays out, we can still speculate how Barbie's desire for freedom, and resentment of being told what to wear, where to go, and even what to eat might brew enough dissent to make her want to jump ship from her community all together. Then again, growing up in such a closed community might make her terrified of the outside world, especially in a place as different from her home as New York (this season takes place in Brooklyn).

Barbie might not be a great candidate for Return to Amish in that case, even though it is probably the best part of the whole franchise. The trailer for the new season features the usual breakdown of some people who take to city life very well and others who are perpetually terrified of it. And while the salacious cuts in the video make it hard to tell who actually does what in the show, we do get a solid tease that someone will sleep with another woman's husband. Could it be a frustrated Barbie? Given the Amish predilection for shunning, one can imagine if it is in fact Barbie who engages in the affair, that she can probably never return. The trailer also warns that there's some shaming ahead, with one of the boys calling one of the girls a slut.

But with all of the activities seen throughout the trailer, it's probably a safe bet to say that any relationships that were intact at the beginning of the season probably didn't make it out that way by season's end. Or if they did, might not survive the reunion and actual airing of the show.

More like this
Gillian Teased A Surprising Ending In 'Temptation Island' Season 4
By Kadin Burnett
All The Clues Gillian & Edgar Are Still Friends After 'Temptation Island'
By Brad Witter
What’s New On Netflix: A Victoria Justice Rom-Com & The Return Of David Letterman
By Arya Roshanian
What’s New On Netflix: The Return Of 'Bling Empire' & A Rebel Wilson Comedy
By Arya Roshanian
Get Even More From Bustle — Sign Up For The Newsletter