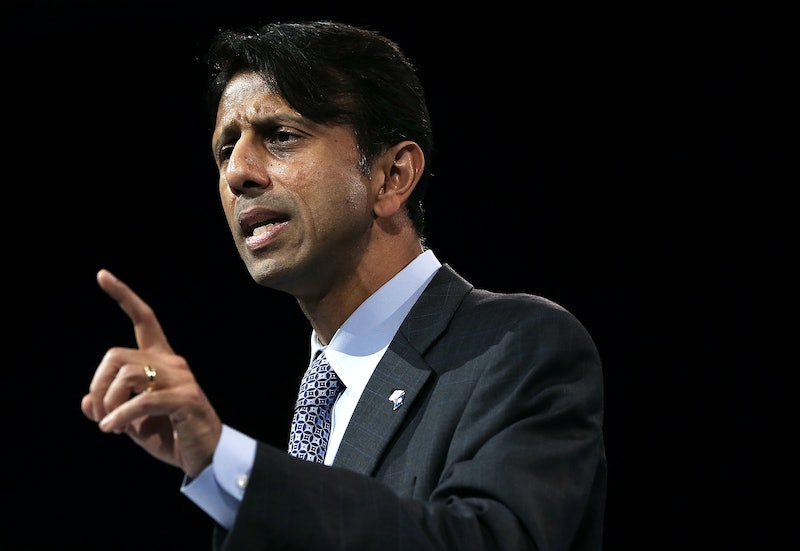 Ever noticed how few scientists we have walking the halls of Congress? Maybe you haven't — after all, Rep. Rush Holt notwithstanding, we usually don't think politicians demand science backgrounds in order to, well, understand or speak on such matters. But don't tell that to the GOP: Elected Republicans aren't scientists, and they love saying so. Even one potential presidential hopeful has gotten into the act: Louisiana governor Bobby Jindal recently used his non-science background to duck a question on something as simple as... evolution. Of course.

Jindal insisted that since he wasn't an evolutionary biologist, he couldn't get into the details of whether the theory adequately explained life on Earth. As The Maddow Blog observes, this is a bit of a stretch — Jindal used to be a Rhodes Scholar and an Ivy League biology student, so rest assured, he's probably got an actual opinion kicking around in there somewhere.

Republican politicians have been resorting to this tactic with greater and greater frequency in recent years, trying to present certain religious beliefs and denialist views on climate change — specifically on the age of our planet, whether our climate is changing, and whether human activity contributes to it — as complicated questions that they're not qualified to speak on.

... Which Doesn't Make Any Sense

It's a particularly silly way to squirm out of answering an uncomfortable question, and in the case of climate change at the very least, it's potentially dangerous rhetoric — if only scientists were equipped to have an opinion, and scientific consensus counts for nothing, we'd all probably be letting the polar ice melt away even quicker than it is now.

It's also kind of a concerning dodge for anyone flirting with aspirations to a higher office — like Jindal. Whatever your religious views, and however they impact your trust in sound, long-tested science, "do you believe in evolution" isn't a very tough question. Unless, of course, you honestly don't, and are open to creationism being taught in schools, which is certainly how Jindal made it sound.

But Jindal's not the only one, and it's not just about evolution.

Marco Rubio Can't Say How Old the Earth Is

Another young GOP presidential hopeful, Florida Sen. Marco Rubio, deployed the very same line in fending off a question about his theological worldview back in 2012. Rubio is a Christian, but has been pretty fluid moving between different denominations. As CNN details, he's been a Mormon, a Catholic, and Southern Baptist.

When asked the straight-forward question "how old do you think the Earth is," Rubio replied with the tried and true response: "I'm not a scientist, man." The "man" part makes you seem laid back and relatable, you see.

Rubio later clarified, under predictable pressure, that he does actually know the "scientific" age of the world — at least 4.5 billion years — and he was merely referring to the "theological" side of the debate. Which, of course, makes no sense — you couldn't initially express the theological debate because you're not a scientist?

The Florida Republican governor toed a harder line back in 2011, when he outright said "I've not been convinced that there's any man-made climate change ... Nothing's convinced me that there is," as detailed by the Miami Herald. Just three years later, however, he's softened his view somewhat — it's not that he's unconvinced, or doesn't trust the overwhelming scientific consensus, he's just not a scientist himself!

Well, I’m not a scientist. But let’s talk about what we’ve done. Through our Division of Emergency Management -- the last few years, three years – we put about, I think, $120 million to deal with flooding around our coast. We also put a lot of money into our natural treasures, the Everglades, trying to make sure all the water flows south. So we’re dealing with all the issues we can. But I’m not a scientist.

As New York Magazine's Jonathan Chait observes, there's a real rhetorical slight-of-hand at play here. By withholding opinions through declaring themselves not scientists, this tact lets Republicans seemingly defer to the authority of science, while also applying a standard which means the vast majority of people wouldn't be fit to judge scientific facts.

Of course, sometimes saying you're not a scientist isn't a dodge, it's the basic, naked truth everyone was waiting to hear. That's the best way to describe outgoing Minnesota Rep. Michelle Bachmann's admission, after a disastrous post-presidential debate remark in 2012, when she told reporters that a woman had told her the HPV vaccine gave her daughter "mental retardation."

When she took to the airwaves the next day, in the always-friendly confines of Sean Hannity's radio show, she may not have expected him to bring up the awkward pseudoscience. But to Hannity's credit, however weakly, he did, and it forced Bachmann to admit exactly what everyone was thinking, according to Yahoo News.

I have no idea. ... I am not a doctor. I am not a scientist. I am not a physician. All I was doing was reporting what a woman told me last night at the debate.

Which gives a keen insight into how Michelle Bachmann parses controversial content for public consumption. Step one, hear it from a person, step two, bring it up in your presidential campaign, step three, votes! Although, step three is optional.