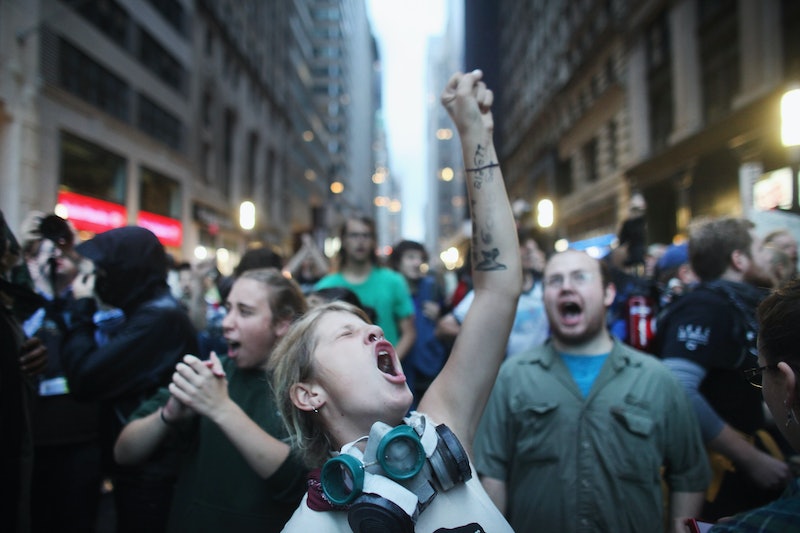 On Sept. 17, 2011, Canadian anti-consumerist magazine Adbusters organized the first Occupy Wall Street (OWS) protest in Zucotti Park in New York City. Three years later, both income inequality and the wealth gap are... still growing. After all, these are gigantic, structural problems that are difficult to measure accurately in a three-year time period, much less solve. The good news is that awareness has grown, too, for both public and policymakers.

According to the Pew Research Center, Americans are more aware than ever of the wealth gap. About two-thirds of the 1,504 adults who responded to the survey said they believed that the gap has increased in the past decade, while only eight percent believed it has decreased. (Hint: It hasn't.)

Raising awareness about the issue has been the primary goal of OWS. But OWS clearly puts blame directly on corporations and the wealthy — the top one percent, to be specific, hence the #WeAre99 hashtag — while respondents' answers as to why inequality has increased were all over the board. Only eight percent of those surveyed by Pew actually blamed corporations/executives, and five percent blamed the wealthy. The most popular answer (although given by only 20 percent respondents) was "tax system/loopholes."

What Do The Real Figures Say?

According to the latest (2013) figures from the U.S. Census Bureau, the top five percent of American households received 22.2 percent of the aggregate income last year (adjusted for different household sizes and compositions). This is nearly as much as the bottom 60 percent of households. The figure has barely budged since 2011, when it was at 22.3 percent.

As for the wealth gap, a study by Emmanuel Saez and Gabriel Zucman from the University of California at Berkeley, found that only those in the very top (0.1 percent) are increasing in wealth shares, and with the 0.01 percent even more so – a phenomenon that hasn't been seen since the roaring 20s. This increase was sharper than ever from 2011 to 2012.

From the latest staggering numbers ($1 trillion in student debt!) to a French economist becoming a viral sensation, there's been plenty of headlines about this topic, and OWS certainly helped to contribute to raising awareness, whether or not Wall Street is to blame. And even if we still can't seem to agree on why inequality keeps on getting worse, and as hard as it is to measure the problem continuously, here are some clear "inequality milestones" we've passed the past three years...

According to both the 2012 and 2013 Global Risks Report by the World Economic Forum, "severe income disparity" was ranked highest likely global risk for the next 10 years. In surveys before 2012, income disparity never even appeared in the top five. It was also found to be closely interconnected with other global risks across all domains surveyed: economic, environmental, geopolitical, technology and societal.

With this looming figure on the next generation's workforce, it's hard to be optimistic about a healthy economy of the future. The staggering number, announced by the Consumer Finance Protection Bureau over two years ago is today growing faster than any other debts in the US. As for state of tyouth in the rest of the world, The Economist reported in April 2013 that almost one quarter of the world's youth were not only unemployed but inactive and neither in training or studying.

A 700-page book on income and wealth inequality theory topped Amazon's number one bestseller for 43 days, to the point where the online mega retailer actually ran out of hard copies to sell only digital versions. The Guardian calls the book "the 50 Shades of Grey of economics books." Whether most of us actually read the book or not (Disclaimer: I have not), it put wealth inequality back on the agenda as a global structural problem and renewed debates among the public once more.

America no longer has the richest middle class in the world.

Wage for the majority must go up, but haven't

Despite growing inequality, wage for most Americans hasn't caught up. According to the Economic Policy Institute which put wage as "our central economic policy challenge," this has either stagnated or declined the past three decades. They also blamed this as the reason why progress in reducing poverty has stalled.

More like this
Michigan’s Governor Is “Going To Fight Like Hell” To Protect Abortion Access
By Andrea Zelinski
23 Abortion Funds In States With Trigger Bans To Donate To
By Emma Carey
What Is Barack Obama’s Net Worth? He Makes *Way* More Now As An Ex-President
By Hugh McIntyre
How To Fight For Reproductive Rights, Based On How Much Time You Have
By Courtney Young
Get Even More From Bustle — Sign Up For The Newsletter