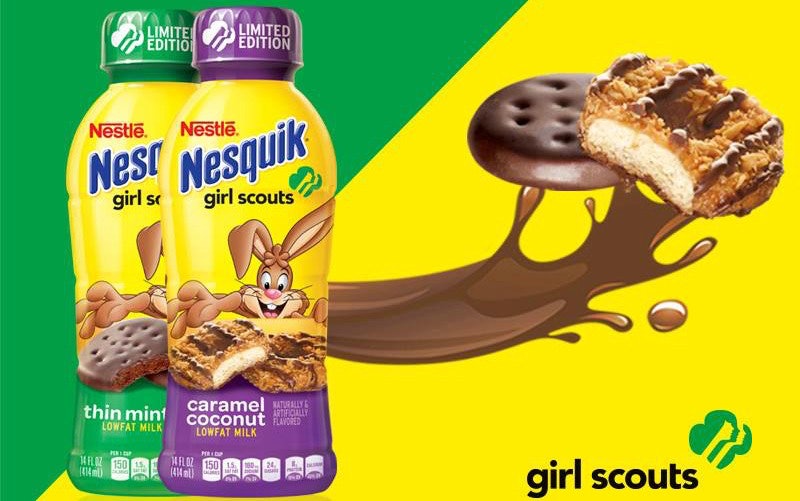 We’re a long way off from the return of Girl Scout Cookie season — but even if you didn’t have the foresight to freeze a box of Thin Mints earlier this year, I think you’ll survive. In fact, I’m positive you will; Nesquik just released Girl Scout Cookie–flavored milk, which means we’ve got ready access to drinkable versions of those special, seasonal treats right now. I usually prefer to make my chocolate milk myself…but I think I can make an exception for these babies. Because yum.

Obviously some types of Girl Scout Cookies are going to translate better to flavored milk form than others; as such, I must offer my sincere apologies to anyone who counts Trefoils or Lemonades among their favorites. It’s probably all for the best, though, since a) shortbread-flavored milk sounds kind of gross, and b) lemon has a nasty habit of curdling milk. What you will find, though, are Nesquik flavors based off of two of the most popular Girl Scout Cookies around: Thin Mints and Caramel Coconut, aka Samoas. Mint chocolate milk and caramel coconut chocolate milk? Yes please!

The drinks appear to have been on shelves in some locations as early as August 2014, according to FoodBeast and The Impulsive Buy. Thrillist, however, recently did a taste test; accordingly, since they’re making the rounds again, I feel they’re worth taking a second look at. The site reports that the mint flavor is quite dominant in the Thin Mint Nesquik; unfortunately, though, there doesn’t seem to be much coconut present in the Coconut Caramel version. At least there’s plenty of caramel to make up for it, though. Both versions might “lose the nuanced flavor of the cookies,” but I’m not going to lie — I’d still drink them, anyway.

This isn’t the first time Girl Scouts of the USA has teamed up with a brand for the purposes of licensed, cookie-themed products, by the way; remember these other picks from years past?

Apparently Nestle has a fabulous working relationship with the Girl Scouts, because in 2012, they released a number of cookie-flavored Crunch bars. I still regret not purchasing a Thin Mints one when I had the chance. One day, perhaps...

Lip Smackers designed to taste like everything from Samoas to Trefoils rolled into town in 2011, and guess what? They’re still available today! At a mere $2.50 a pop, they’re definitely worth the expense — and they give you a healthy dose of nostalgia while you’re at it.

Because who wouldn’t want to make their coffee taste like Thin Mints? These coffee add-ins made their debut in 2013; I’m pretty sure they’re still around today, too, so hie thee to thy local grocery store to get them.

I had no idea this existed until right this very minute, but I think I can safely say that it is the best. Thing. Ever. Like many of the other items in this list, they first appeared in 2013 and still exist today. Awesome.

As you might expect, this offering is not officially licensed by the Girl Scouts of the USA. I do applaud the San Francisco brewery that created them, though; great thought appears to have gone into the flavor pairings, with Thin Mints taking the form of a peppermint porter, Do-Si-Dos becoming a peanut butter cream ale, and Trefoils transforming into a golden ale. Well played!