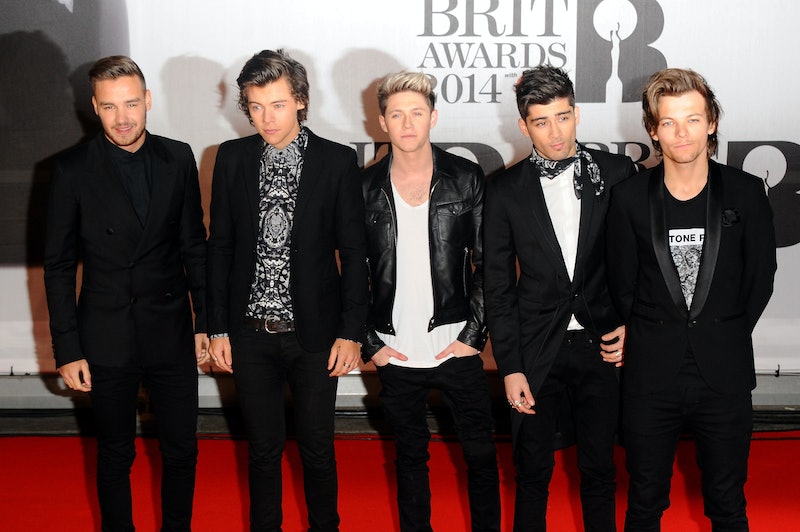 For the record, I'm not sharing this video so that we can all wring our hands over whether or not One Direction's Niall Horan has joined up with The Gays. Even if he is kissing a guy in this Vine (which, let's be honest, might not be what we're seeing. It looks equally probably that he was just trying to shout in his ear in a loud club.), one kiss with a dude does not equate to a coming out party. Kissing someone of the same sex does not define your sexual orientation. And hey, maybe the person he's maybe kissing in this video doesn't even identify as male. Who knows?

Which is really the point: who fucking knows. The alarming thing about this video isn't the possibility that someone in a boy band ostensibly locked lips with another guy – it's that so many people are still of a mindset where that kiss would hold big implications about these two guys' lives and identities. Sexuality (and gender because, again, who's to say if that's a male person in the video? Sure, it appears to be based on our personal conceptions of what a male person looks like, but we don't truly know because we don't know that person which should remind us that none of this is really any of our damn business.) is a complex aspect of someone's identity, and we would be both arrogant (about our entitlement to know those things) and ignorant (about our definitions of sexuality) to think that we could make definitive statements about those parts of Niall Horan's life based on one possible kiss.

Either way, Niall, not surprisingly, is having none of this rumor:

Shrug. And no, the fact that he didn't come right out and say, "I'M STRAIGHT. I ONLY LOVE VAGINAS FOREVER. KISSING A DUDE WOULD MAKE ME BARF A THOUSAND BARFS. I WILL PUNCH YOU IF YOU CALL ME A HOMO." is not, despite what some lame-asses will undoubtedly claim, an admission of gayness. Honestly, if I were in a boy band, my entire personal brand would be built on ambiguous sexual orientation lest I risk alienating gay men or teenage girls from my fan base. In Niall's position, keeping people guessing means keeping the most possible people holding on to the shiny, shiny dream of one day winning a ticket to his One Dickrection (SEE WHAT I DID THERE?)

I'll just say this: Niall, if you were kissing that guy, then kudos. You kissed a hot person. Kissing hot people is fun. If you were not kissing him, then I hope you remembered to push down on that little piece of cartilage at the opening their ear before you spoke because that really does help someone hear you better in a crowded space. Pro tips all around.

Here's the video in question:

More like this
Spice Girls’ Net Worth: The Richest Member Is Wealthier Than The Rest Combined
By Hugh McIntyre
20 Celebrity Couples Who You Forgot Dated In 2002
By Jake Viswanath
G Flip Shared How They Got Romantic With Chrishell Stause & Discussed Babies
By Brad Witter
Britney Spears Set A Wedding Date With Fiancé Sam Asghari & Previewed Her Dress
By Bustle Editors
Get Even More From Bustle — Sign Up For The Newsletter