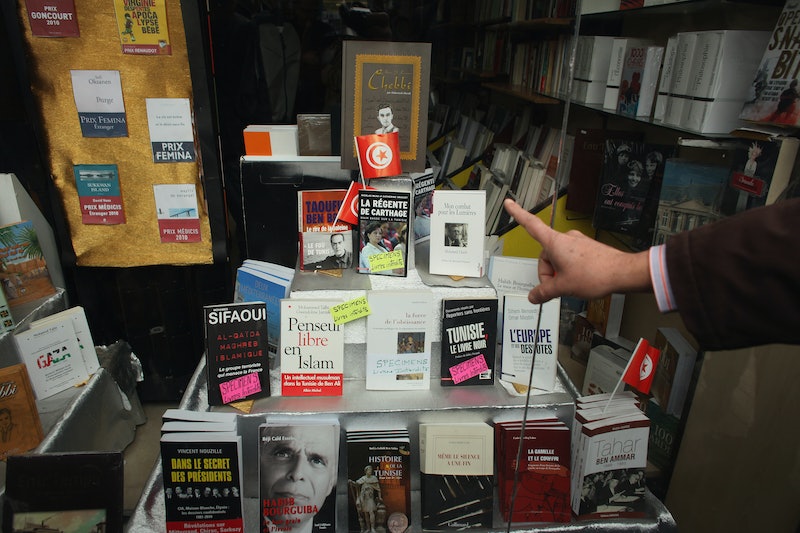 Welcome to Banned Books Week, fellow readers. Once again, it's time to turn our attention toward the worst, most senseless, and most reactive book bannings this great planet has ever witnessed. Though censorship is never cool, man, some of the great book bannings of history do make a decent amount of sense when you consider their cultural context. Controversial works like Ulysses, Tropic of Cancer, and "Howl" were just too much, too fast, too soon for society to deal with at the time. We might not agree with their former banned status, but it's not hard to understand why mainstream establishments had a conniption fit at the idea of Stephen Dedalus on the beach.

But then there are the instances of book banning that make no sense whatsoever. The outraged parent who sees dirty subplots when no dirty subplot exists; the paranoid government that's pretty sure the whole book is a secret plot to teach Communism to babies. Some of these stories of censorship are particularly hilarious, but keep your favorite novel close to your heart: The book-banning war is still going strong.

In 2009, the bear of little brain came under fire in Russia for promoting a little thing called Nazism. Pooh himself has never breathed a word that could be mistaken for Nazi propaganda, but officials found a drawing of Pooh wearing a swastika in the possession of a known political extremist, so naturally, they concluded that Pooh was a threat. After all, where one Pooh wears a swastika, all Poohs wear swastikas.

In 1987, someone tried to spot Waldo on the beach and, horror of horrors, spotted a topless beach-goer instead. According to Banned Books Awareness, the breast in question is just 1/16 of an inch. That's 1/16 of an inch too much, buddy!

In 1965, Maoist China banned the book for portraying "early Marxism" — you know, the political viewpoint that insists people try new foods — and the ban wasn't released until Dr. Seuss died in 1991.

4. The Scarlet Letter by Nathaniel Hawthorne

In 1961, outraged parents referred to the book as "pornographic" and "obscene," despite the fact that there are no sex scenes in the book, and the general idea of the book is that if you have sex, your community will shun you and your life will be terrible. Hot! In 1977, a parent objected to the book's frequent use of "4-letter words," causing the school librarian to realize that the parent had never read the book at all.

In the spring of 2014, a citizen filed a complaint with the Toronto Public Library against this Dr. Seuss classic, insisting that Hop on Pop "encourages children to use violence against their fathers” and demanding that the library should apologize to any and all wounded fathers in the area as well as paying "for damages resulting from the book."

Tarzan may have found love in the jungle with Jane, but he should have put a ring on it. In 1929, the Tarzan books were banned in Tarzana, California since Tarzan and Jane were living together without being married.

7. A Light in the Attic by Shel Silverstein

Silverstein has gone through a fair amount of book banning in his day, but the best/worst example of this was probably the 1985 drama at an elementary school in Wisconsin, where parents insisted that this tale “encourages children to break dishes so they won’t have to dry them.” Silverstein, you anti-dish fox!

8. James and the Giant Peach by Roald Dahl

This classic tale of lust and seduction came under fire in a Wisconsin town because a spider licks her lips in the book, and naturally, that could be "taken in two ways, including sexual," according to The Times of London.

9. My Mom's Having a Baby! by Dori Hillestad Butler

As you can tell by the cover, this book is all about NUDITY and FORNICATION. According to the author, she has been accused of writing pornography, trash, and being “a child predator [sic] of the worst kind."

10. The Rabbits' Wedding by Garth Williams

In this pleasant childhood tale, a rabbit with white fur marries a rabbit with black fur. In 1959, Alabama was not cool with this.

Once upon a time, Little Red Riding Hood carried a bottle of wine through the woods, as you can see in the above illustration. And you don't even want to hear this line: "The grandmother drank some of the wine, and ... after a while, the grandmother felt quite strong and healthy, and began to clean up the mess that the wolf had left in the cottage." For being a sloppy mess, the book was banned in Culver City, California in 1990.

In a truly ironic twist, Orwell's novel about a totalitarian regime was banned by the very regime it satirized: Stalin's Soviet Union.

13. 13: Thirteen Stories That Capture the Agony and Ecstasy of Being Thirteen, by James Howe, ed.

This book has been banned for being unsuitable for the age group it targets. It's a collection of stories about being 13, pitched at 13-year-olds. But you're right, it's more of a "grandma and grandpa"-level read.

14. Puss in Boots, Cinderella, Jack and the Beanstalk, and Beauty and the Beast

You never know when the story of Cinderella finding her prince might inspire a massive prison break, but better safe than sorry, because all four of these fairy tales have been banned by Guantánamo Bay censors. Good thing they haven't read Rapunzel yet — all that hair, and climbing out the window? It's enough to make a reader feel faint.