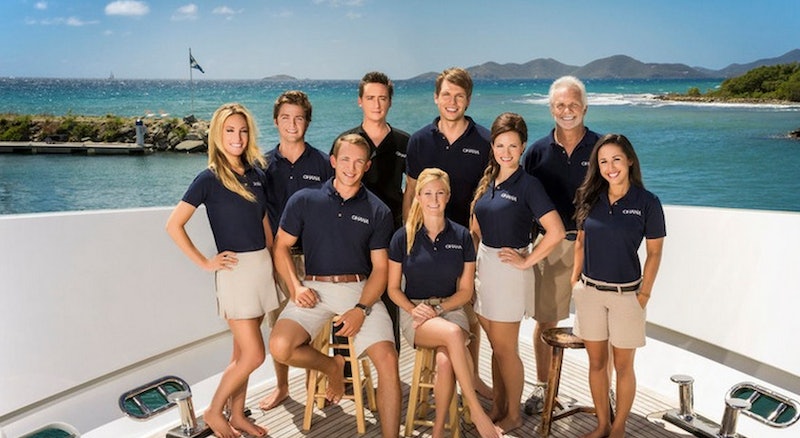 As far as cringe-worthy reality show couples go, Below Deck's Kelley Johnson and Jennice Ontiveros are up there. At first, they were kind of adorable — two, attractive, young deckhands, both with significant others, who were sharing a room together — but then things started to get uncomfy. Kelley, despite being a hunky Marine, proved to have zero game, and when he kissed Jennice (ugh, the kiss), I think a little part of us all died inside. After the kiss, it seemed fairly obvious that the pair weren't going to live a happily ever after. But now, after last night's Below Deck , it seems like Kelley and Jennice definitely aren't done hooking up. This gives me the low-grade urge to stab myself in the thigh with pretzels I'm eating, because if two people were ever wrong for each other, it's them.

It was nice to see that Kelley and Jennice talked to each other after "the kiss," because that would have been super weird if they didn't, but their conversation was almost as awkward as the kiss itself, what with Kelley storming off, saying, "I'm good. I'm good." And then Jennice went and made things worse by trying to talk to him again when he was taking a moment — and she even asked him if he wanted a hug! What were you thinking, Jennice?!

Even though Kelley moved out of Jennice's room (good idea), I can't imagine these two won't hook up at least one more time this season, which, again, is a terrible idea. I guess let's just all hope that if and when they do, it will involve both of them being into it, as opposed to one person kissing the other, sneak-attack style. Ugh. No thanks on that.