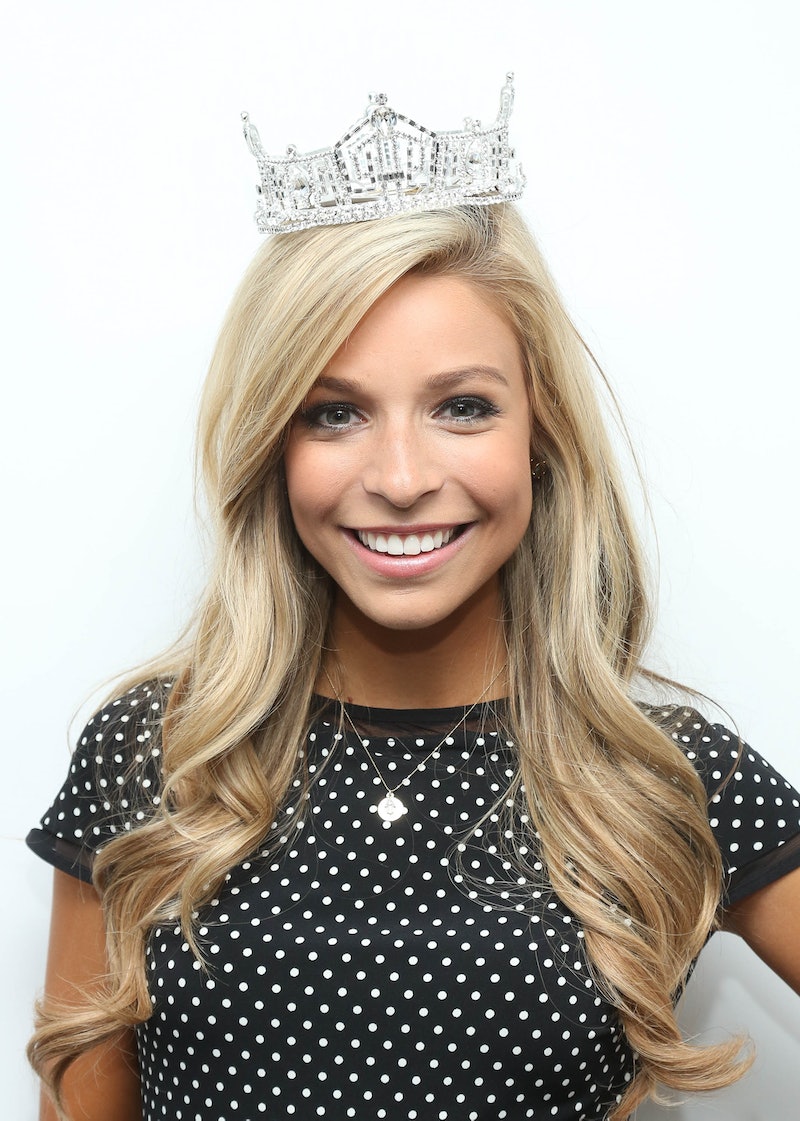 Newly crowned Miss America Kira Kazantsev didn't charm too many viewers with her cup-percussion routine, and she's certainly not winning any conservative fans over with her resume. After scrolling through her LinkedIn profile, conservatives are outraged that Miss America once interned at Planned Parenthood, making her a pro-choice beauty queen of sorts. According to anti-abortion opponents everywhere, we just can't have a woman like that representing America.

Although reproductive rights didn't come up during the Miss America pageant — Kazantsev's official platform is domestic violence — it turns out some abortion foes were creeping on her LinkedIn profile. Let's just say they did not endorse her previous intern experience.

Kazantsev, who hails from New York, apparently served as an education intern for Planned Parenthood in Hempstead, New York, for three months in 2013. Her LinkedIn profile was taken down earlier this week, but The Huffington Post has a screenshot of the online CV. According to her profile, Kazantsev's duties as an education intern for the reproductive health organization included "teaching children about mutual respect and self-esteem" and conducting "research on Planned Parenthood Education."

Now, there's nothing in Kazantsev's profile about abortion — and as we all know, Planned Parenthood provides services other than abortion — but that didn't stop anti-choice website LifeNews from attacking the new Miss America. Of course. As LifeNews writer Steven Ertelt put it:

So the woman representing the nation as the new Miss America interned for the very organization that has killed millions of Americans in abortions.

It would be a tragedy if someone who is looked up to by many young women actually buys into the Planned Parenthood abortion agenda. Unfortunately, most people in the country don’t know that Planned Parenthood is the largest abortion provider. This will cast a shadow on her entire reign.

And if you doubted that "abortion stigma" existed, take a look at some of these tweets...

So, should Miss America be de-crowned for volunteering her time to educate young men and women about healthy and safe sex lives? (Answer: no.) But it's worth highlighting how something as innocent as interning for three months with Planned Parenthood can instantly eject a woman from the "good American woman" pedestal. What makes a "good American woman" in this case? Not expressing any political views, apparently.

Every Miss America is not going to be representative of every single American woman — evident from the lack of diversity in the long-running contest —nor does the pageant serve that purpose in 2014. But conservatives are also underestimating the number of women who support reproductive health care, sex education and organizations like Planned Parenthood. After all, one in three American women will have an abortion in her lifetime, and more than 60 percent of American women currently use birth control — that's a lot of women.

And it's not like Kira Kazantsev is the first Miss America contestant who has shown support for pro-choice initiatives. Just ask Nancy Redd, who competed in the 2004 pageant and expressed her feminist stance in a 2013 New York Times editorial:

I can’t speak for other pageant systems, but I can say that, when I was 22, the Miss America Organization gave me a powerful, if unusual, platform to share my hopes for the future of young women and to be myself: an African-American, pro-choice, pry-my-mascara-out-of-my-cold-dead-hands, proud Southerner. And a feminist.