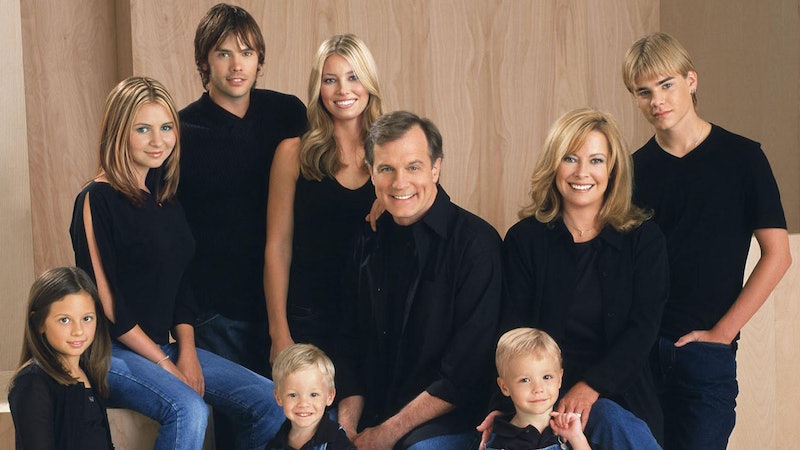 7th Heaven, the show about a family of seven (five kids and their parents, until it became seven kids and their parents) premiered in 1996 on what was then the WB. The show was scandalous for the time — dealing with sex, drugs, alcohol, homophobia, disease and more — but it's not-so-subtle religious undertone made it acceptable for younger audiences. It was certainly my guilty pleasure, and even as the years passed, there was always a Camden boy to swoon over, from Simon to Matt to Mary's hodgepodge of bad boy boyfriends. And now, the 7th Heaven cast has rekindled their relationship to bring us one heck of an epic reunion.

Beverly Mitchell, who played Lucy Camden on the long running show, posted a photo of the gang having a jolly good time on her WhoSay account, and we couldn't help but sigh with nostalgia upon seeing the fictional family back together again.

But there is one unmistakably missing person — the youngest of the clan — Ruthie Camden (played by Mackenzie Rosman). So where the hell was Ruthie?

Last year, the actress pulled a Jessica Biel, and in an attempt to distance herself from her good-two-shoes 7th Heaven image, posed in lingerie for Maxim magazine. The magazine cover boasted the headline: "Hallelujah! 7th Heaven's Ruthie is All Grown Up!" She also had a role in a Sharknado-esque type made-for-TV-movie Beneath.

Following Beneath, the actress took a role in Ghost Shark, where she is (spoiler alert!) eaten alive by a mythical water creature in the first half hour. Her IMBD credits end in 2013 and her twitter page offers little insight into what the actress is working on as of late.

Needless to say we were a little bummed to see Rosman missing from the family portrait, but it's pretty damn epic nonetheless: