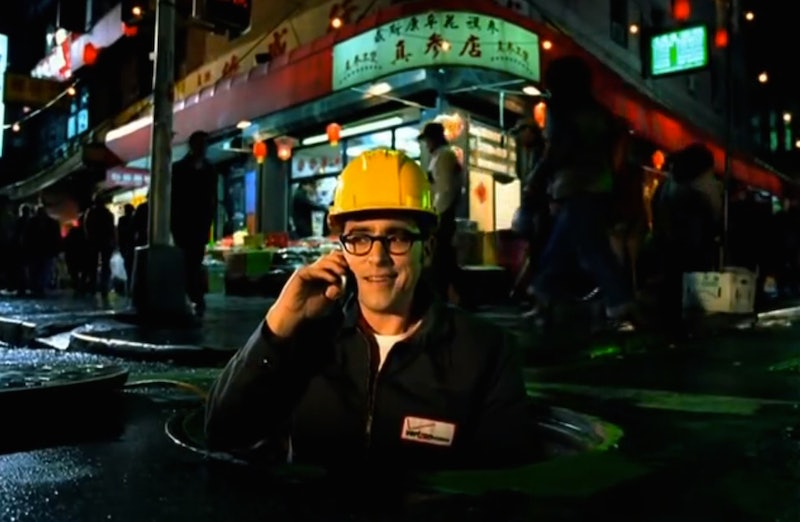 Sure, TV commercials can be annoying, unwelcome, sometimes offensive intrusions — but they can also serve as benchmarks in our lives. "Hey, where was I when that Budweiser Frogs commercial first aired? Oh yeah,, I was on summer break, aged nine, and when I got back everyone was quoting it!" Basically, commercials can take you back, so here's a look at an old friend: Whatever happened to the Verizon Wireless guy?

You know the one! That dapper young man in the thick-framed black glasses who roamed the country, endlessly checking the integrity of Verizon's U.S. network. Every few seconds, he'd check again: "Can you hear me now? Good." It was a ubiquitous ad campaign, and for nearly nine years, you really couldn't turn on the TV without seeing his efficient, workmanlike image staring back at you, imploring you to sign up with Verizon.

Well, things have changed quite a bit since the character's first appearance in 2002 — we all have smartphones, for one — and actor Paul Marcarelli is no longer signed on as the company's high-profile pitchman. So, what's he been getting up to besides?

He Makes His Own Films Now

As it turns out, quite a few things, none of which he could've made happen while he was still hawking phone plans. For starters, he's a filmmaker, having co-written the 2011 independent film The Green, and also having co-founded its production company.

That Marcarelli is pursuing an artistic path shouldn't come as a surprise — he is an actor, after all, which is easy to lose sight of when someone disappears into a recurring commercial role for so many years.

Actually, I remember my college acting instructor making an example of Marcarelli when discussing the different career paths a performer can pursue. His challenge was simple enough: would you want to play a recurring commercial character like the Verizon Guy, and get all that cash, if it means risking being remembered for that solitary role?

The Pitfalls Of Being "That Guy"

Sounds like the price of that kind of fame did take a toll on Marcarelli's life — as detailed in a wonderful 2011 profile in The Atlantic, throughout his time with Verizon, Marcarelli was forced to keep a low profile and signed an agreement preventing him from taking any other commercial work. But maybe most troubling was how the character ended up policing and infringing on certain areas of his personal life.

As he told The Atlantic, even while attending his grandmother's funeral in 2011, his role was on people's minds. While her casket was being lowered, he overheard somebody whisper: "Can you hear me now?"

Marcarelli is gay, a fact which he didn't feel he could reveal while signed to his long-term Verizon deal. Sensing the risk that his sexual orientation could derail his high-value job, he even declined to file a police report relating to homophobic harassment. From The Atlantic:

... They started screaming ‘faggot’ up at my house. It got progressively more profane as the years went by. ... As soon as I hung up the phone, I realized that in order for [the police] to do anything about it, it would have to become a report that would go into a police log.

His Life Is Pretty Different Now

Thankfully, Marcarelli told The Atlantic that he felt a sense of freedom as soon as his work with Verizon ended.

It's got to feel rough for an actor to get locked into one memorable commercial role like that — and playing such a trifling, substance-free character, to boot. It's as though an entire craft and career are boiled down to moments people remember right alongside stuff like Spuds MacKenzie and the Hamburgler.

But now, freed from his contract and at 44 years old, Marcarelli is trying to chart a new path. And more power to him. At the very least he's glad to not be smiling into those damn phones anymore — summing the experience to The Atlantic, he made it pretty clear that he's better off now.

There’s a price to pay. Don’t feel bad for me, but I’m definitely glad that chapter is over.

More like this
Amanda Seyfried Reflects On 'Mean Girls' & "Gross" Remarks That Men Made After It
By Jake Viswanath
'Dirty Dancing's Jennifer Grey On The Tearful Moment That Changed Her Relationship With Patrick Swayze
By Sam Ramsden
Cameron Diaz Just Recreated *That* Iconic 'There’s Something About Mary' Scene
By Rachel Mantock
What’s New On Netflix: A Victoria Justice Rom-Com & The Return Of David Letterman
By Arya Roshanian
Get Even More From Bustle — Sign Up For The Newsletter