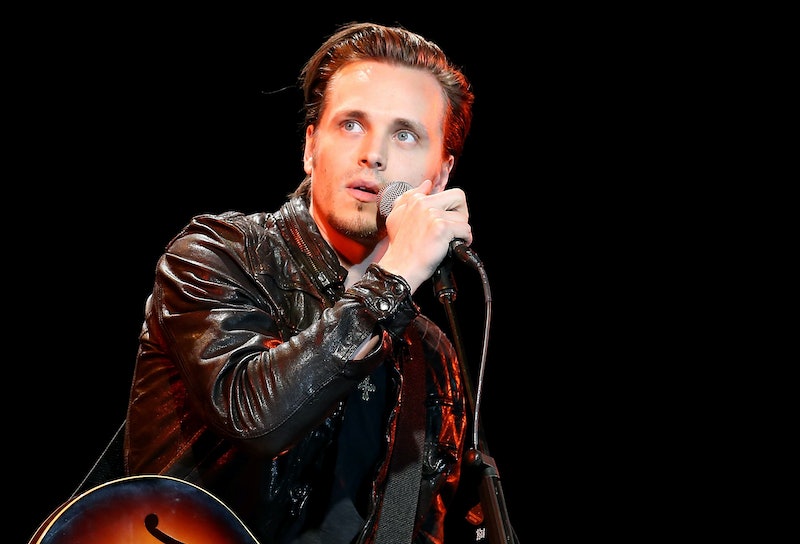 Seeing as how Nashville star Jonathan Jackson plays struggling singer/songwriter Avery Barkley on TV, naturally one wonders how much of the character he portrays onscreen is reflected in his real life. Obviously, they're both musicians, but they do have a few differences. For example, Jackson's band Enation has covered quite a bit more ground than the up-and-coming Barkley, who, not for lack of talent, is still working steadily to gain solid footing in the music industry. The actor also describes the sound of his band as "European, alt-rock, with a little hint of indie," a slight variation from Barkley's alt-country crooning. And while Barkley remains trapped in an unstable love triangle between Juliette Barnes and Scarlett O'Connor, Jonathan Jackson's real love life couldn't be further from the prickly romantic entanglements that will continue to plague his character on into Season 3, thanks to a most persistent waitress. Clearly, Barkley doesn't have a problem attracting the ladies, but what about the man behind the man? Is Jonathan Jackson single?

Fans who clamor and drool over the Nashville star might not be too happy with me after what I'm about to reveal, but there's really no way to let you guys down easy... so, I'll just come right out with it. To answer the question of whether Jonathan Jackson is single, the answer is a resounding no. But wait! Don't stop reading yet! Jackson's married and has three children with his wife Elisa, who's also an actress, but his non-single status still doesn't take away from his complete and utter rock star appeal because...

Using the moniker J.S. Jackson, in 2012 he published his first poetry collection titled Book of Solace and Madness.

Jackson won his most recent Emmy in 2012, but his Emmy reign began in 1995 when he won Outstanding Young Actor in a drama series for his portrayal of Lucas "Lucky" Spencer on General Hospital.

His kids have the cutest rock star-esque names

Jackson and his wife's three children are named Adora, Caleb, and Titus Gabriel.

He's officially one of the beautiful people

People once included him on their list of 50 Most Beautiful People.

Did I mention that Jackson is a lead singer in a band? If that's not rock star appeal, I don't know what is.