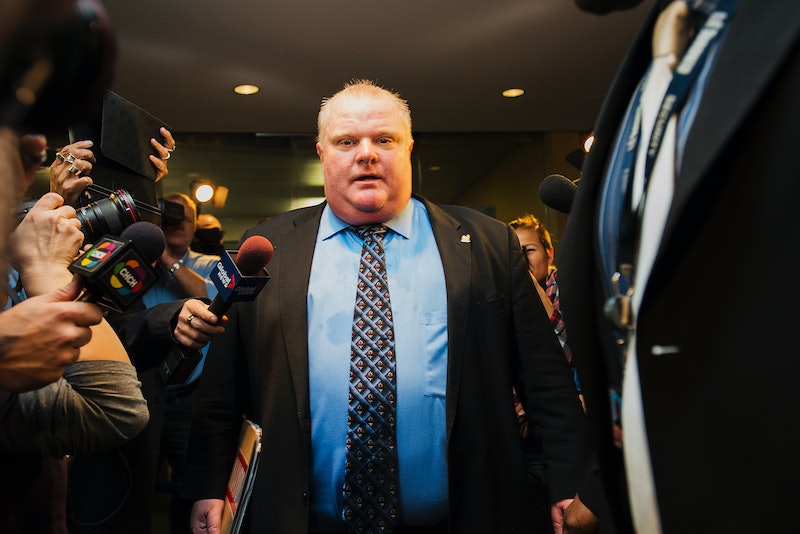 Doctors at Mount Sinai hospital said on Wednesday that Toronto Mayor Rob Ford has a rare cancer that will require aggressive treatment. The boisterous mayor, whose off-duty antics have long placed him in the media spotlight, was hospitalized at Mount Sinai over a week ago with a tumor in his abdomen. According to his doctors, the tumor is malignant sarcoma, a form of soft-tissue cancer that's found in fat cells, muscles and tendons.

Dr. Zane Cohen, a colorectal surgeon at the New York hospital, told reporters that Ford will undergo intense chemotherapy treatment for three days. The treatment is scheduled to begin within the next 48 hours. It's unclear at this time if the 45-year-old mayor will need surgery or radiation to shrink the tumor, which is currently 12 centimeters long and wide. "He's having some pain still," Cohen said.

Cohen called Ford's cancer, which has started to spread throughout his body, "fairly aggressive." He added the cancer may have been present in the mayor's body for two or three years, because these types of tumors are usually "slow growing."

However, Cohen said he and the team of doctors at Mount Sinai remain "optimistic" about Ford's prognosis. Ford's brother, Doug, also remained upbeat, releasing a statement Wednesday saying his brother will beat his cancer:

My brother has been diagnosed with cancer and I can't begin to share how devastating this has been for Rob and our family. He is an incredible person, husband, father, brother and son and he remains upbeat and determined to fight this. Rob has always been so strong for all of us and now I ask us all to be strong for him. Your kind words and well wishes mean everything to him right now. Rob will beat this.

The controversial Toronto mayor who was seeking reelection dramatically pulled out of the mayoral race last week after admitting himself to Mount Sinai for stomach pain. Doug Ford, a current Toronto city councilor, will run for office in his place. He has yet to start campaigning for the Oct. 27 election.

According to The Toronto Star, Rob Ford will remain in charge of the Canadian city until a new mayor is sworn in on Dec. 1, unless he decides to take a leave of absence. Ford has served as mayor of Toronto since December 2010. In 2013, he became ensnared in several public scandals involving drugs and alcohol, and has admitted to smoking crack cocaine after a video surfaced on the Internet.

More like this
How The City Healed Five Years On From The Manchester Arena Attack
By Ella Glover
Bustle Newsletter: May 25, 2022
By Stephanie Talmadge
Mandy Moore On The Out-There Wellness Treatment She's Obsessed With
By Rachel Lapidos
Zosia Mamet Opens Up About Her Eating Disorder
By Zosia Mamet
Get Even More From Bustle — Sign Up For The Newsletter