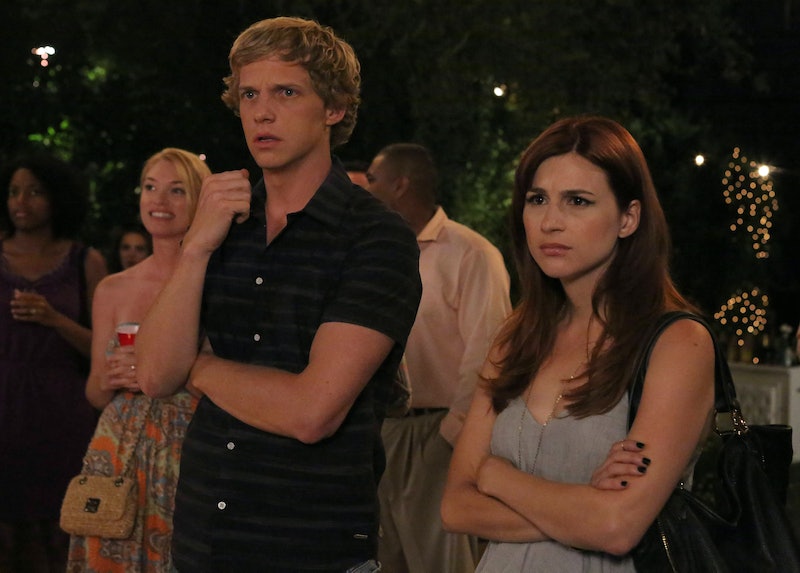 I don’t know if it’s Chris Geere’s British accent that finally won them over, but I can’t tell you how many of my friends, separately, have admitted to me that FX’s You’re the Worst had grown on them. Each time, it was like they were divulging a dirty little secret. I don’t know why they all seemed so sheepish about it. But now the cat’s out of the bag, they all want a second season. Unfortunately, as the show finishes it first season on September 18, it’s unclear whether You're The Worst Season 2 will be greenlit.

FX has not yet announced whether You’re the Worst will be canceled or renewed, though the network has weighed in on some of its summer shows — like The Strain , which has already been renewed for next summer — but there’s been no word on its freshmen summer sitcoms. Still, it's not that hard to suss out You're The Worst's chances.

For those of you who are like my friends and are looking for a sliver of hope, the ratings for You’re the Worst have stabilized. This is not the case for its fellow FX comedy, Married, which has seen its ratings bounce wildly up and down the past few weeks. It would obviously be better if the numbers improved, but at least they’re not shrinking, or vacillating unpredictably. There are people who tune in, and they consistently tune in every week. This is the good news.

The bad news is that the number of people who tune in every week is still pretty low. In general, the show has around half a million viewers every week. The comedies that have had multiple seasons on FX — shows like The League, Archer, Wilfred, and It’s Always Sunny in Philadelphia — regularly had double You're The Worst's audience tuning in each week.

But You’re the Worst has an ace in the hole: critics’ love. Slowly, but surely, more and more critics have come on board:

And it's even “certified fresh” rating on Rotten Tomatoes was much, much higher, clocking in at a healthy 76 percent.

And, as the show has aired over the summer, it grew on critics like it grew on some of my friends. Some of them even wrote second-look reviews after a few episodes had aired, like this one from Alan Sepinwall, which says the show deserved a closer look than he gave it the first time. “’You're the Worst’ was one of four series premieres in the same night, all of which I found so unremarkable that I reviewed them briefly together,” he wrote. “It's turned out to be a really strong debut season, and I hope FX — whose executives have been preaching about the increasing irrelevance of overnight ratings — keeps it around even though the traditional numbers have been awfully thin so far.” I agree, my friends agree — this seems to be the general consensus.

It’s clear that You’re the Worst brings people on board if they take the time to watch it. If FX is plugged into that kind of buzz that’s been going around about it, maybe it’ll have a shot at a second season after all.

More like this
The 'This Is Us' Finale Featured An Adorable Season 1 Jack & Rebecca Easter Egg
By Grace Wehniainen
Britney Spears Met The Weeknd & Sam Levinson, So She May Actually Be On 'The Idol'
By Jake Viswanath
'Obi-Wan Kenobi' Takes Place After This Key Star Wars Movie
By Arya Roshanian
Twitter Is In Tears After *That* Jack & Randall Parallel On 'This Is Us'
By Grace Wehniainen
Get Even More From Bustle — Sign Up For The Newsletter