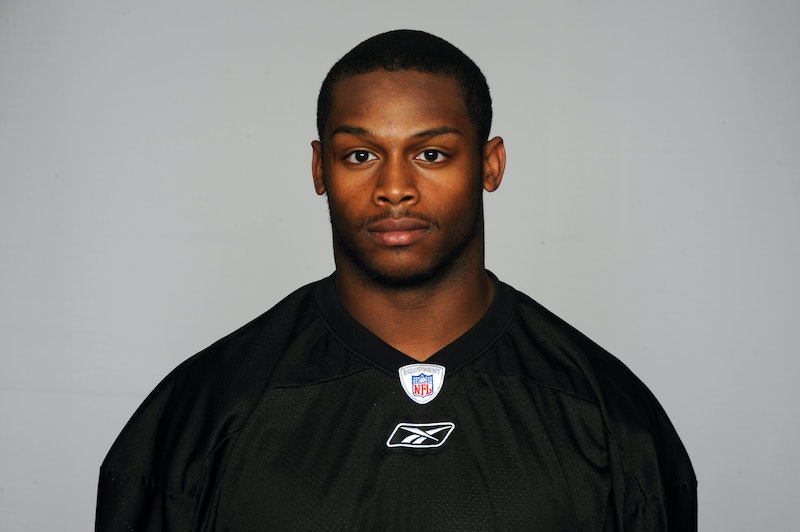 It's week three of the pro football season, and another NFL player faces criminal charges. Arizona Cardinals running back Jonathan Dwyer was arrested for assault on Wednesday in connection with two incidents that occurred at his home in late July. The Cardinals deactivated Dwyer after being informed of the charges.

Dwyer was arrested on aggravated assault charges, as well as two counts of criminal damages and one count of preventing someone from calling 911. AZ Central reports that the 25-year-old running back was taken into custody at the Cardinals training facility in Tempe, Arizona.

According to police and media reports, Dwyer allegedly assaulted a 27-year-old woman who's the mother of his 18-month-old son. Police officers were called to Dwyer's Phoenix home on July 21 after neighbors alerted authorities about a fight; Dwyer hid in a bathroom until the officers left. Phoenix police spokesman Sgt. Trent Crump told AZ Central:

They were convinced that the fight was verbal (and) that it was called in by a third party. She convinced them of that while he was hiding in the home.

The following day, Dwyer allegedly threw the woman's cellphone from the second floor of the house, breaking it so she couldn't call the police. Police say Dwyer may have also thrown a shoe at the baby.

The woman left the state shortly after the two incidents, and didn't contact authorities until last week. She reportedly presented photos of her injuries, as well as text messages from Dwyer.

We became aware of these allegations this afternoon when notified by Phoenix police and are cooperating fully. Given the serious nature of the allegations we have taken the immediate step to deactivate Jonathan from all team activities. We will continue to closely monitor this as it develops and evaluate additional information as it becomes available.

An NFL spokesperson also commented on the situation, saying the pro football league will review the case under its personal conduct policy. Meanwhile, Dwyer has denied the charges of physical assault.

The 2014 NFL season has been marred by domestic violence and assault cases since the release of an elevator video showing former Baltimore Ravens running back Ray Rice knocking his now-wife Janay Palmer unconscious. Although a segment of that video was initially released in February, and Rice was arrested on assault charges in March, neither the NFL nor the Ravens took immediate action against Rice. Following the release of the full video on Sept. 8, Rice was terminated from the Ravens and suspended indefinitely from the NFL.

Last Friday, Minnesota Vikings running back Adrian Peterson was indicted by a Texas grand jury on charges of reckless or negligent injury to his four-year-old son. Peterson was deactivated from the Vikings for one game, reinstated on Monday, and deactivated again on Wednesday. He was placed on the exempt/commissioner’s permission list, which means he still collects a salary, until his case is resolved. Carolina Panthers defensive end Greg Hardy was also placed on the exempt list on Wednesday as he waits for his domestic assault case to go to court.