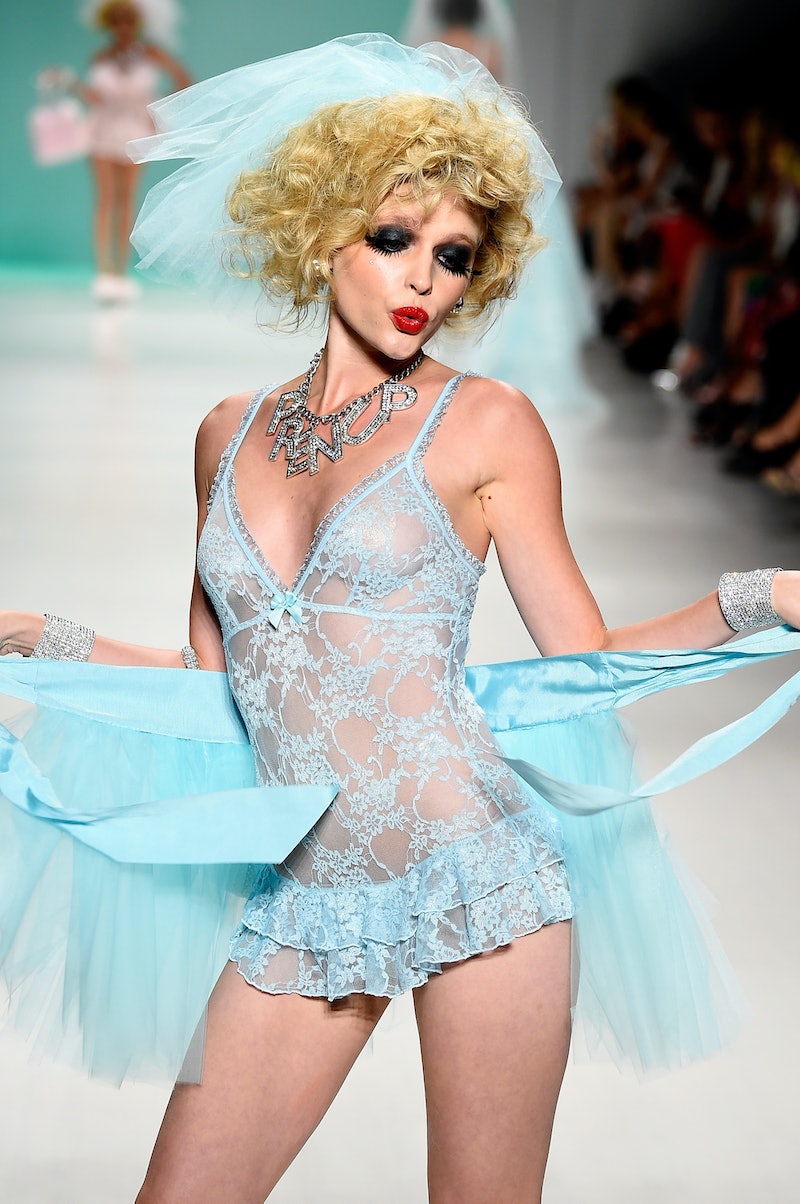 There has been more than a minimal amount of skin on display this year, both on the Spring 2015 Fashion Week runway and off. From pasties to dresses so flimsy the wearer may as well be naked, skin is in, and it's enough to make me wonder: Will Spring 2015 be a completely clothing-optional season?

Miley Cyrus's dubious pasties at Alexander Wang's after party may not have spurred this particular trend, but they do perfectly illustrate the movement towards nudity. As the notoriously attention-seeking singer styled the rest of her ensemble as usual, the look was deemed at the very least some semblance of an outfit. The concept of adhering to the most minimal definition of an outfit is becoming an unforeseen theme this season, from the runway to the street.

The body-on-display vibe reverberated throughout the collections of Thomas Tait, Alberta Ferretti, Juan Carlos Obando, and Lisa Perry, among others. While Tait went for the gold with several completely translucent looks that displayed nearly every curve of his models' bodies, Alberta Ferretti took a slightly more romantic approach with ruffles and floral accents, though the gauzy, nude materials and minimal fabric she utilized resulted in several barely-there ensembles that wouldn't have looked out of place on Brooke Shields in Blue Lagoon.

Lisa Perry echoed the trend in her unique, mod way by clothing her models in clear rain slickers edged in black or white piping. And Juan Carlos Obando favored the plunging neckline in his Spring 2015 collection, the slashed fabric on one burgundy dress being so incredibly deep that it exposed the entirety of a color-coordinated bra. In light of all the literally transparent clothing and micro-mini silhouettes, it seems fair to wonder if nude is the new expectation for the coming season.

The trend wouldn't be quite so startling if it were confined to Fashion Week, but the nude look has jumped off the runway and onto the streets this year as well. Excluding Cyrus's not-entirely-unexpected pasties experiment, the no-clothing trend has become a celebrity mainstay at this point. Rihanna's Adam Selman dress at the 2014 CFDA Awards literally left the singer's assets on display for all to see, unless you mistake the gown's Swarovski crystals for real coverage. Meanwhile, Rita Ora's MTV Music Awards Donna Karan Atelier gown may be credited with the highest slit and lowest neckline pairing the red carpet has seen in recent year.

And on September 16, Julianne Hough took up Jennifer Lawrence's gauntlet when she wore a completely sheer lace Olcay Gulson ensemble to the Kicking Clouds EP release party in Beverly Hills. The onslaught of scantily-clad, transparent-clothing-wearing celebrities was further underlined by Scout Willis's shirtless Instagram snap, which the actress explained as a plea for "a woman’s right to choose how she represents her body," as well as an initiative to #FreeTheNipple.

So the question remains: What does this nearly-nude trend mean for the rest of us? If a significant amount of the available wares for Spring 2015 are constructed in transparent nude fabrics and barely-there silhouettes and celebrities are going au naturel, the expectation is that the rest of the country will fall into line with the trend as well. While I don't expect to see an abundance of women roaming the streets in their skivvies anytime soon, it does seem as though various states of undress are the newest fashion. If you're uneasy about the trend, now might be the time to invest in a few nude camisoles because spring is looking more skin-centric by the second.