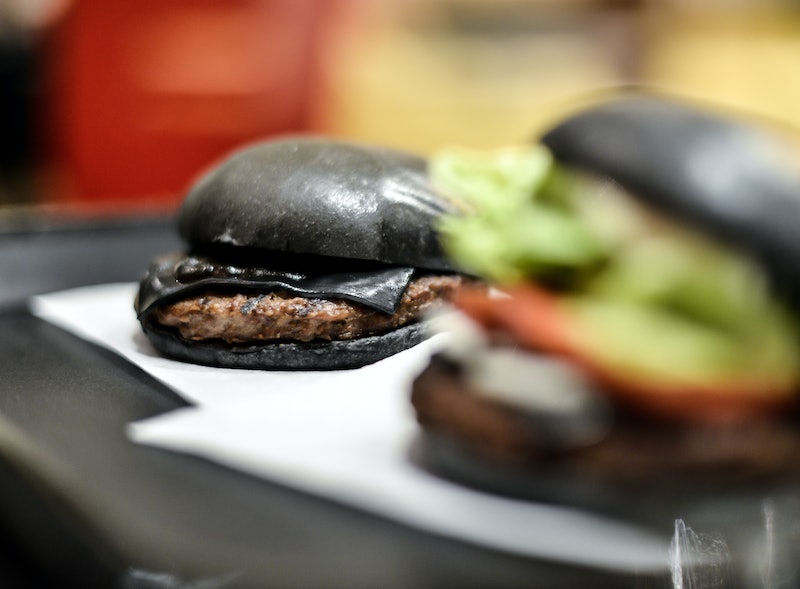 It feels like every week there’s a new kind of burger, sandwich, taco, or pizza that’s been tampered with beyond recognition. For instance, Taco Bell has been on a roll recently, releasing not only the Doritos Locos tacos, but also the waffle taco. So far, so good. We love Taco Bell, and we also love Doritos and waffles, so these edible hybrids have totally won our hungry hearts over. Other projects? Not so much.

As you might have seen last week, Japan’s Burger King just released the all new black burger with black cheese. While the Internet cradles and adores all things bizarre and gross, real life people are pretty unforgiving. As a society we generally don’t like our fast food fucked with. We like our cheeseburgers to look like normal, golden beacons of tastiness and processed joy. We like our pizzas as round, doughy saucers of cheese that bring epic catharsis, and we get kind of confused when fast food companies get creative with their advertising. Remember when Quizno’s ran that spongemonkey ad? Well, now they’re dying a slow, sad, miserable death, which is a bummer because I was always Team Quizno’s (at least they didn’t pretend they were selling diet food).

Even if Burger King’s black burgers turn out to be wildly successful, fast food fails can be super funny regardless. Lo, and behold:

Because McDonald's is an ultra proud sponsor of the Olympics and all, they cleverly decided to give out free Big Macs, fries, and Cokes whenever the US won a medal in the 1984 Olympics. Since they pretty much banked on the Soviet Union winning everything because that's what the Soviet Union did, McDonald's figured they had nothing to lose. Well, lose they did. Because of the 1980 Olympics boycott in Moscow (because of the invasion of Afghanistan), the Soviet Union decided they should probably boycott us, so the US ended up winning everything almost by default. McDonald's had to give out millions of dollars worth of free food, and eventually ended up running out. Ouch.

The Hula Burger was designed for ultra-devote Catholics who didn’t eat meat on Fridays. Instead of opting for like, I don’t know, a veggie burger, McDonald's decided pineapples were a mighty fine substitution for beef. Since pineapple burgers are disgusting, that never became a thing.

3. Burger King came out with the Enormous Omelet Sandwich

There is nothing wrong with an egg sandwich. Dunkin' does it. Einstein's does it. McDonald's does it. But for some reason, when BK did it, everyone seriously lost their mind. There was just...so much of it.

As it turns out, black buns aren't a new concept. Last October, Japan was all about the Black Ninja Burger, a burger that featured a patty, lettuce, mayo, hash browns, and humungous piece of Canadian bacon.

6. Burger King got all autumn on us with the Pumpkin Burger

Also native to Japan, this burger decided to get on PSL train by offering a pumpkin variety. The sauce it came with was made with almonds, peanuts, cashews, hazelnuts, and sesame seeds. This burger be nutz.

KFC came out with a chicken sandwich that brilliantly did away with bread, because who needs bread when you have fried chicken, amiright?

This past April brought us Pizza Cake, an invention made by the Canadian pizza company, Boston Pizza. According to Mirror, Boston Pizza got customers involved when told they could vote on which "pizza mutation or accessory" they wanted most. This disaster hasn't made its way into the States, so I consider that a victory in and of itself.

In the '80s, you could order "frings," which were a hybrid between onion rings and fries. Um. What.

They were called the Bell Beefers, and apparently they were delicious. Taco Bell discontinued them after health officials deemed them as anti-nutritious (uh, guys?)

12. McDonalds does McAfrika, is McAwful

In Norway, you could have purchased the McAfrika, a burger that is made with an allegedly legit African pita-like bread. According to The Guardian, McDonald's was accused of being inappropriate and distasteful (pun probably not intended, I am guessing). Gee, McDonald's. I wonder why.

The 100x100 burger deal was on the super secret In 'n Out menu. You could literally order 100 patties and 100 buns at any In 'n Out, as long as you were chill and didn't tell on In 'n Out (who supposedly had a 4x4 limit). Obviously someone had to go tell on them, because we're just a bunch of tattletaling humans, so this doesn't exist anymore. This is why we can't have nice things.

Pizza Hut tried out Chicago-style Deep Dish pizza, and spent $15 million in advertising doing so. Apparently the pizza took forever to make when people ordered it. Also, do people actually like Deep Dish?