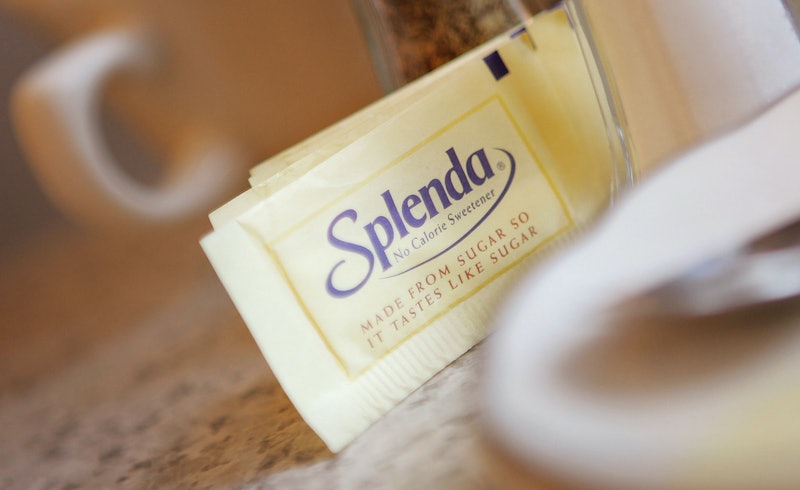 Remember that whole thing about how artificially sweetened diet sodas probably aren’t the best way to cut down on your sugar intake? Well, here’s another study that further supports it — as well as proves why we should probably stop consuming artificial sweeteners all together: According to new research conducted by Eran Elinav of Israel’s Weizmann Institute of Health, artificial sweeteners actually change the bacteria colonies in our guts — which in turn leads to high blood sugar and weight gain. Sure, we consume fewer calories in the short term with artificial sweeteners… but the long-term effects of what they’re doing to our bodies are still bad news.

The study had a couple of parts to it, which The Verge breaks down nicely. First, Elinav and his team tested the effects of three artificial sweeteners on mice, using regular sugar as a control. Each of the artificial sweeteners — aspartame, or NutraSweet; sucralose, AKA Splenda; and saccharin, or good ol’ Sweet’n Low — induced a far greater change in the mice’s blood sugar levels than the sugar did.

The weird thing, though, was the fact that the mice were experiencing blood sugar level alterations due to the artificial sweeteners in the first place. You know why artificial sweeteners have zero calories? It’s because mammals’ bodies can’t actually digest them. I don’t know about you, but that kind of freaks me out.

Anyway, Elinav and his team theorized that the bacteria living in the guts of the mice might be interacting with the sweeteners in some way; accordingly, they designed a few more experiments to test the idea out. First, they began regularly feeding the mice artificial sweeteners; then they gave antibiotics that kill gut bacteria to them to see what happened. After the antibiotics were administered, the mice’s blood sugar levels returned to normal. In a second experiment, they transplanted feces from the mice who had been eating sweetener to ones who had never touched the stuff (not unlike the fecal transplants being performed in humans these days) The mice on the receiving end of the transplant ended up with boosted blood sugar levels. Lastly, the researchers performed some genetic analysis that revealed changes in the colonies of bacteria living in the mice’s guts changed the way they functioned.

The question then, of course, became, do artificial sweeteners cause the same changes in the guts of humans as they do in mice? For this last group of experiments, Elinav and his researchers performed the same kind of analysis on the blood sugar levels and gut bacteria colonies of 381 human participants that they did on the mice — and lo and behold, those who regularly consumed artificial sweeteners displayed both changes in their gut bacteria and qualities like increased weight. Then, just to cover all the bases, the researchers followed a small group of seven humans who don’t regularly consume artificial sweeteners for one week after giving them a single dose of saccharin. The changes in gut bacteria as well as boosted blood sugar levels were visible in half of the participants after a mere four days.

Anything that changes how your body naturally functions is generally pretty bad news; as such, the obvious solution is for us to stop consuming artificial sweeteners. Besides, we already know that artificial sweeteners also trigger cravings without satisfying them, prompting us to consume more sweet stuff later on. But if we take Elinav’s study in conjunction with a different recent one, the picture gets a little more dire: According to cardiologist James O’Keefe in the American Journal of Cardiology, sugar is the main enemy of heart health — not, as is commonly thought, salt. So if artificial sweeteners are bad for us, and sugar is bad for us, what does that leave us with? A solution a lot of people aren’t going to be happy about: Simply consuming fewer sweet things in general.

But it’s not impossible. All we have to do is be mindful about what we eat and drink — everything in moderation and all that. It’s better than feeling like our guts are full of tiny little aliens, right?

More like this
An Honest Review Of The TikTok-Famous WalkingPad
By Kaitlyn Wylde
How To Protect Your Digital Privacy If You Need An Abortion Post Roe v. Wade
By Kaitlyn Wylde
If Your Refrigerator Is A Mess, These 25 Organizing Products Can Help
By Courtney Young
Here’s What Sarah Jessica Parker’s Canned Cosmo *Actually* Tastes Like
By Emma Garza
Get Even More From Bustle — Sign Up For The Newsletter