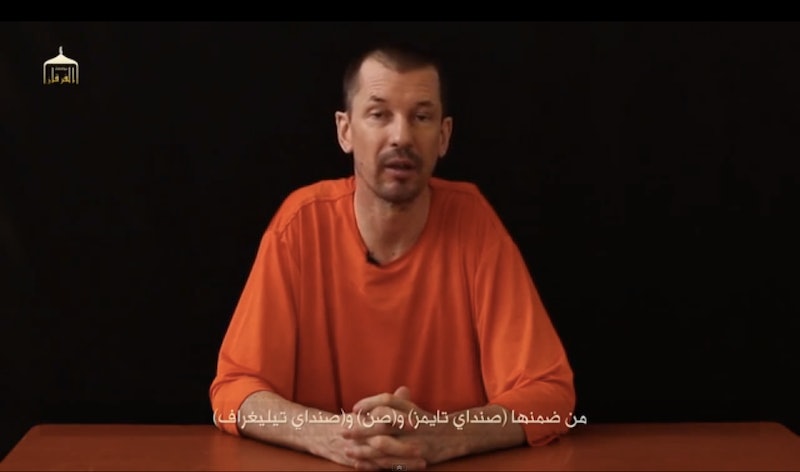 A new video from the Islamic State of Iraq and Syria surfaced on Thursday, but rather than depicting another brutal beheading of a foreign hostage, the terrorist group is now using captives as spokespeople for their message. In the latest ISIS video, British hostage and freelance journalist John Cantlie, clad in the same orange jumpsuit as slain hostages James Foley, Steven Sotloff and David Haines, relays the group's condemnation of the U.S.-led wars in Iraq and Afghanistan. The video, titled "Lend Me Your Ears," is clear propaganda meant to turn public opinion on the U.S. and its ally, Great Britain.

Cantlie, who worked for British publications The Sunday Times, The Sun and The Sunday Telegraph, was captured while on assignment in Syria in July 2012. He was released shortly after, but was taken hostage four months later while riding in a car with Foley, the slain American photojournalist.

In the video, which is shot against a plain black backdrop, Cantlie explains that even though he's a prisoner of ISIS, he was "abandoned" by his country:

Now, I know what you're thinking: You're thinking he's only doing this because he's a prisoner. ... Well, it's true: I am a prisoner. That I can not deny. But, seeing as I've been abandoned by my government and that my fate now lies in the hands of the Islamic State, I have nothing to lose. Maybe I will live, and maybe I will die.

The British journalist, who's presumably reading from a script, states that he's going to explain some "facts" about ISIS and U.S. and British intervention in the Middle East:

After two disastrous and hugely unpopular wars in Afghanistan and Iraq, why is it that our governments appear so keen to get involved in yet another un-winnable conflict. I'm going to show you the truth behind the systems and motivation of the Islamic State, and how the Western media — the very organization I used to work for — can twist and manipulate that truth for the public back home. Think you're getting the whole picture?

Cantlie, who appears calm and measured, said this video was just the first in a series of lectures about the so-called "truths" of ISIS. He did not say when the next video would be released.

The ISIS video comes on the heels of the U.S. House of Representatives authorizing the arming and training of Syrian rebels to help battle ISIS on the ground. The 273-to-156 vote was uniquely bipartisan, showing accord between Speaker of the House John Boehner and Minority Leader Nancy Pelosi. The Senate is expected to vote on the Syrian-rebel funding on Thursday.

The White House has yet to release a statement on the new ISIS video and British hostage John Cantlie.

This is the first time Cantlie has appeared on-screen in an ISIS video, becoming the third British hostage to be threatened by the terrorist group over the last month. In the execution video of British aid worker David Haines, ISIS threatened to murder British humanitarian worker Alan Henning. Muslim leaders from across the U.K. reportedly submitted a plea to ISIS on Thursday for the safe release of Henning, according to The Independent.