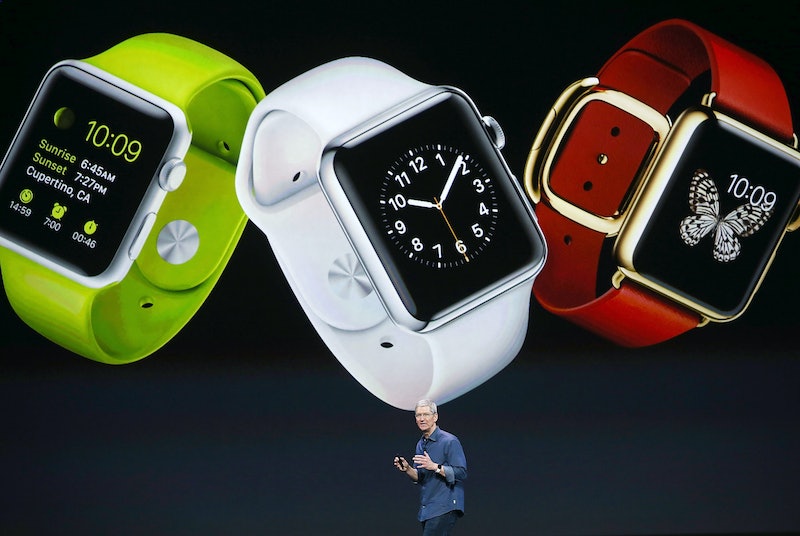 Bid farewell to Apple's days of monochromatic simplicity. The tech giant that made black and white chic has reintroduced color into its palette, and nothing is more indicative of this fundamental change in Apple's values than the immense collection of Apple watch straps available. For years, we've been refused optionality. For years, we've been stuck with a single design and a single aesthetic. But now, Apple knows, one is the loneliest number. And to compensate for years of condemning us to no choice at all, we now have more choices than we ever thought possible when it comes to the Apple Watch.

The watch itself comes in two sizes and three styles, which already means that you have six options from the get go. There's the Apple Watch, which appears to be the most simplistic of the trio. Then there's the Apple Watch Sport, the playful sibling of the original that is meant for the gal or guy on the move. And then, there's the mac daddy of them all, the Apple Watch Edition, with cases made of 18 karat gold. If this sounds like your kind of watch, you might want to start saving now — the Edition will likely set you back $1200. But hey, you'll be able to tell time and see how many steps you took in a day!

The variety afforded by the mechanical (or rather, electrical) portion of the watch is already significant, but once the straps are factored in, even the most colorful personality is sure to find his or her match. There are no fewer than six watch materials, each of which are offered in a variety of colors. Tentatively, there are 21 options currently available for an early 2015 purchase, but this number could certainly grow.

There are the fluoroelastomer bands, meant to go with the Sport version of the watch, which can be found in the same colors as the ill-fated iPhone 5C. Eager athletic types can choose from black, white, blue, pink, and green. Yellow, unfortunately, didn't make the cut.

Then there's the elegant modern buckle, generally displayed alongside the Apple Watch Edition. This strap comes in yet another series of sophisticated colors, including a soft pink, brown, and navy blue. But even more impressive than the colors is the material itself — Apple added an "inner layer of Vectran weave" to make the band stronger and more stretch resistant. Vectran weave, apparently, is "the same material NASA used to create the parachute strings for the Mars Rover." Other leather band options include the Classic Buckle and Leather Loop both of which feature their own unique colors.

The Classic Buckle is the only one of the lot only available in one color — any guesses at which color? Black. Apple, always so predictable. Who says classic means black?

On the other hand, the Leather Loop affords buyers with three different colors to choose from, including stone, light brown, and bright blue. The coolest thing about this strap? There are actually magnets embedded within the leather itself, which means that you'll never have to fidget with an awkward clasp again. It also means that it's completely adjustable, so your wrist doesn't have to conform to some randomly placed holes on a band.

But if you'd prefer to pair your new watch with a more modern strap, there are also two metal options, both crafted with stainless steel. The Link Bracelet, which comes in stainless steel and space black stainless steel, is comprised of over 100 components, because simplicity is an aesthetic, not a best practice. Apple boasts, "it takes nearly nine hours to cut the links for a single band," and each link actually gets wider and wider as it approaches the watch itself. And if you find your wrist getting wider as well, fret not! Apple has engineered this band to be fully customizable so that you can add links to make it larger.

The Milanese Loop creates what appears to be a cloth-like textile from stainless steel, weaving the metal into a mesh. Like the Leather Loop, it is also completely magnetic, so you just wrap and go.

As overwhelming as this may all seem, Apple has, in typical Apple fashion, anticipated the sensory overload eager customers were certain to experience with the announcement of so many colors, materials, and styles. So lucky for us, all of these bands are completely interchangeable. So really, your one watch can look like 21 different watches, particularly because you can even change the design of the face itself!

When the Apple Watch was originally conceived in 2010, the idea, as Venture Beat puts it, "flopped." The iPod Nano had the potential to become a watch, but it was never really meant to be clipped onto a strap and placed on your wrist. Even the tiniest version of the iPod was still too large and clumsy to fit comfortably on most people's wrists.

But now, four years later, Apple is back in the game. And now that they're in the wearable tech industry, there's no telling what they'll do next.

More like this
Dua Lipa Just Took A “Pre-Show Dip” In A Dreamy Thong Bikini
By Allie Fasanella
‘90s Streetwear Brands That Are Making A Major Comeback
By Dominique Norman
14 Spicy Bralette Outfits For Vaxed Girl Summer, Round 2
By Avery Matera
Fashion Trends From 2002 Making A Comeback
By Avery Matera
Get Even More From Bustle — Sign Up For The Newsletter