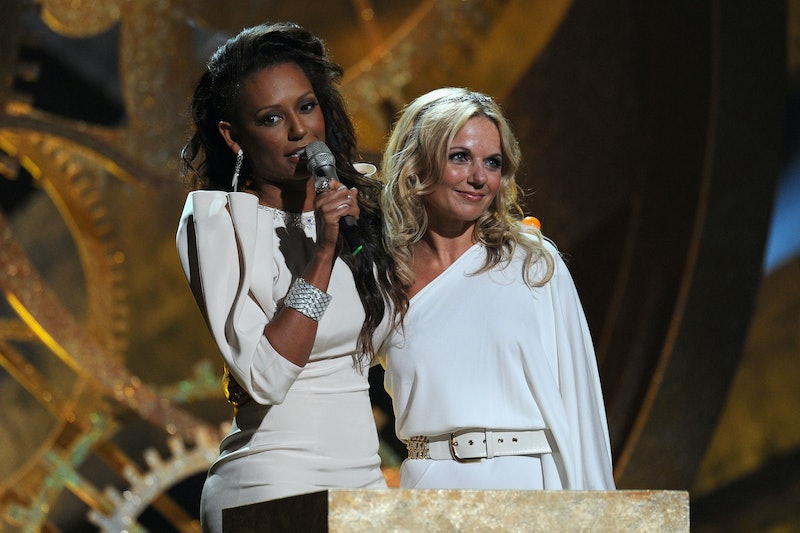 Gather 'round, fellow Spice Force Five Wannabes, for this story may be of interest to you: Scary Spice sat down with Suspenders Spice and spilled some tea about the Spice Girls. In a recent Larry King Now interview, Melanie Brown candidly discussed the day in 1998 that will live in infamy, aka the day Geri Halliwell called it quits.

When Geri left the group, it was bad. She left on my birthday, and didn't tell anybody… Just didn't show up. We had the rest of the tour. The American part of the tour.

Eesh. It's no secret that Mel B. and Geri's relationship was tumultuous when they were in the group together, and it isn't exactly shocking that this particular birthday surprise only added fuel to the feud's fire: Mel B. told Larry King that there was bad blood between the two of them “for a long time."

But don't worry, they're totes cool now. How cool are they? Well, for one thing, Mel B. can get away with teasing Geri about her departure:

I still remind her of it. Like, I saw her a couple weeks ago and I said, ‘Do you remember when you left on my birthday?’ [Laughs.]

If there is one lesson we can take away from this, it is that friendship never ends. Zig-a-zig-AWWWWWWW.

Whenever I read about Geri's exit, the song "Goodbye," aka "Farewell Ginger Spice," pops into my head. At the end of ’98, the remaining four Spice Girls released it as a single, and it is included on 2000's full-length album Forever. I may or may not have cried the first 10 times I listened to it.

K1: Hold up. What if the "Goodbye" lyrics are actually full of hints about the feud?K2: Are you serious? No way. If anything, it's a heartfelt sendoff to their former bandmate. K1: But what if it was about Mel B.'s birthday!? K2: It's not. God, you always read into everything. Stop right now, thank you very much. Don't run wild with this, K1. K1: Too late. I already filtered the lyrics through what Mel B. told Larry King.K2: Ughhhhhhh.

LYRIC: Listen little child/There will come a day/ When you will be able, able to say/Never mind the pain or the aggravationK1: Oo! "Little child" could be the group's way of calling her childish. K2: No, I think it's supposed to be a term of endearment.K1: Hm. Well, I'm totally convinced that the next part means "one day we'll be able to be in the same room, but that today is not that day. Because the pain and aggravation cannot be never minded."K2: What are you saying? Ugh, I'm already exhausted.

LYRIC: Goodbye my friend/I know you’re gone, you said you’re gone, but I can still feel you hereK1: Hm. Maybe a pair of platforms she left behind fell out of one of the storage compartments on the tour bus and hit one of the other Spice Girls on the head. K2: Wow, that is not a stretch at all.

LYRIC: It's not the end/You gotta keep it strong before the pain turns into fear K1: "It's not the end" could be a "THIS ISN'T OVER, GINGER." K2: What is happening.

LYRIC: The times when we would play about/The way we used to scream and shout/We never dreamt you'd go your own sweet wayK1: They had fun and they fought. K2: OK, next lyr—K1: "Sweet"—>"Sugar"—>"Frosting"—>"Cake"—>"Birthday." The hints are there, K2.K2: Are we almost done?

LYRIC: You know it's time to say goodbye/And don't forget you can rely/You know it's time to say goodbye/And don't forget on me you can rely/I will help you, help you on your way/I will be with you every dayK1: Hm, hm, hm. You know, I can't find anything that sounds like a thinly veiled dig or a reference to Geri quitting. K2: You pulled every other interpretation out of thin air, so why stop now?K1: OK, OK, you caught me. I BSed all of it. BUT IT WAS FUN, WASN'T IT?K2: You are a menace.

More like this
Spice Girls’ Net Worth: The Richest Member Is Wealthier Than The Rest Combined
By Hugh McIntyre
Harry Styles Addresses The Theory That His New Song "Daylight" Is About Taylor Swift
By Jake Viswanath
Joe Alwyn Reacts To Taylor Swift Earning An NYU Doctorate In A Rare Interview
By Jake Viswanath and Nicole Pomarico
Harry Styles Opened Up About Olivia Wilde With A Rare Comment About "Trust"
By Sophie McEvoy
Get Even More From Bustle — Sign Up For The Newsletter