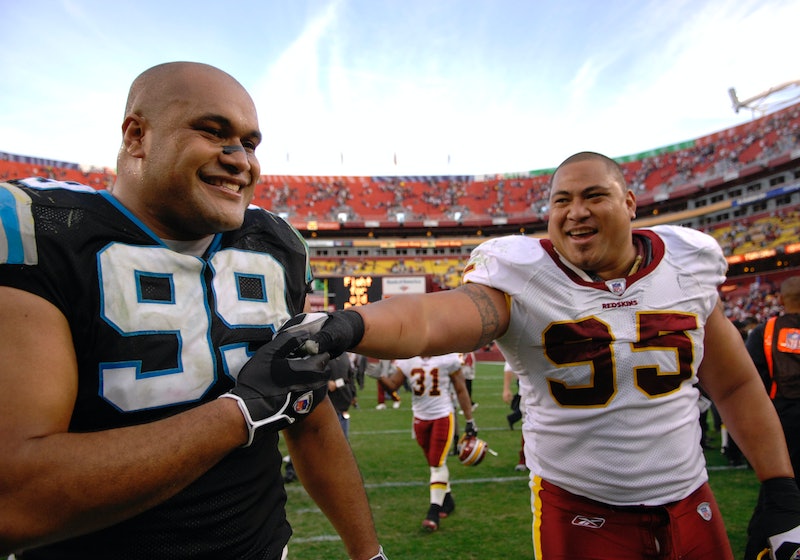 The NFL is in desperate need of a new narrative, one that doesn't involve domestic abuse. And in a decidedly different sort of family, the Kemoeatu brothers have emerged to prove that the league has also employed some truly great men. After his baby brother, an ex-offensive lineman for the Pittsburgh Steelers, discovered that he would need a kidney transplant to save his life, former Baltimore Raven Ma'ake Kemoeatu retired to donate his own kidney. Talk about sibling love.

Despite the vicious rivalry between the brothers' respective teams, their personal connection couldn't be closer. Chris Kemoeatu has fought kidney pain since the eighth grade, the source of which was later discovered to be a type of kidney disease. But like all great athletes, his ailment never stopped him from playing football, and his illustrious career has included two Super Bowl wins with the Steelers over the course of seven seasons.

But in 2011, the pain became too severe, and Chris was forced to retire. Just one year later, his older brother, Ma'ake, followed suit, giving up his passion and his career to donate a life-saving kidney, and grant Chris the opportunity to finally lead a pain-free life. The transplant surgery was completed on August 27, and both brothers are said to be recovering well.

For Ma'ake, quitting the Ravens was never even a choice — it was a familial obligation. As the oldest of seven children, Ma'ake has always taken his role as the big brother very seriously, and donating a kidney was no exception. He told ESPN,

I'm the oldest of the seven kids, and it's my responsibility to take care of my younger brothers and sisters. If my younger siblings need blood, it'll be my blood. If they need a kidney, it'll have to be my kidney.

Ma'ake has always operated with this mentality. In fact, he has a track record of self-sacrificing moves on behalf of his siblings. During his senior year of college, USA Today reports, Ma’ake was suspended by the NCAA for "improperly providing textbooks to his younger brother." The crime? Ma'ake, who attended the University of Utah on scholarships, bought his little brother, Tevita, school books because his parents couldn't afford them. As a result, Ma'ake missed his final collegiate game — the Las Vegas Bowl against the University of Southern California.

More than a decade later, Ma'ake's commitment to family above all remains strong. A 99 percent match with his brother, Ma'ake was the perfect candidate for the donation. “The doctor said we could pass as twins to do this surgery,” Ma’ake told USA Today, "My dad wanted to do it, and we kind of got into it because I didn’t want him to do it."

And so instead, the nearly 400-pound lineman decided to volunteer himself for the arduous process of preparing for and undergoing the surgery. Both men, brawny, heavy football players, had to lose significant amounts of weight to ready themselves for the procedure. Chris, unable to do any physical exercise, was subjected to dialysis, the first of many hurdles he would have to cross. “First starting out, I didn’t know how it was going to go because I’m scared of needles,” said Chris to USA Today, “So going into this was tough.”

But then, it was discovered that Chris would first have to undergo coronary bypass, another invasive procedure that would have to happen before the doctors could even consider continuing with the kidney transplant.

Unfazed, Ma'ake used football talk to soothe his brother's fears. He told ESPN, "I talked to him in football aspects. I said, `All right, we're not going to get this in the first down, but we're fourth and long right now and we have to go deep. We'll make it through the first down — the heart surgery — to the end zone: the kidney transplant.'"

In what may be the most gratifying touchdown of all, the brothers did indeed make it to the end zone, and Ma'ake's kidney was said to be the size of a small football. Dr. Stephen Bartlett, the brothers' surgeon, told USA Today, "It was one-and-a-half times bigger than any other kidney I had ever seen in my life. It was absolutely remarkable."

Despite the unquestionable sacrifices Ma'ake has made on behalf of his brother, he remains as humble as ever. "The credit goes to my brother," Ma'ake said to USA Today, "Because he had so many flare ups. He had to go into training camp and had to fight through the pain and get ready for the season." But thanks to Ma'ake's enormous donation, Chris may no longer have much pain to fight through.

"It definitely brought us closer as brothers," Chris told ESPN. And the whole family has grown closer throughout the ordeal. Various Kemoeatu siblings have flown from Hawaii to visit the two in order to cook for them and clean the house. For a family that grew up rarely saying "I love you," sometimes, actions speak much louder than words.