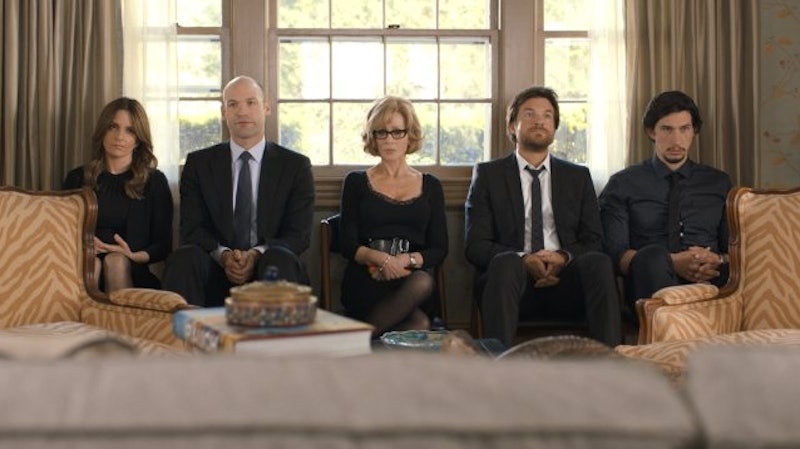 Since the adaptation of Jonathan Tropper's This Is Where I Leave You was announced, fans of the 2009 novel could rest easy knowing the film was in good hands. After all, the author himself penned the screenplay based on his beloved novel. Not many authors have such a big hand in adapting their work, but Tropper is pretty uniquely positioned as both a novelist and a screenwriter, so his involvement actually made a lot of sense. So what does that mean for those who loved the novel? Well, they'll get the chance to see a film that closely resembles what they read in Tropper's pages. There are some cuts, sure, but hey — a lot of the book's best dialogue made it into the film fully intact. Despite the fact that the film is largely faithful, though, how different is This Is Where I Leave You, the movie, from This Is Where I Leave You, the book?

There are still a somewhat hefty handful of changes — things are bound to get shuffled around as 350+ pages of first person narrative gets condensed into just over an hour-and-a-half of screen time, after all... and the resulting changes run the gamut from head-scratching, to welcomed with open arms, to downright disappointing. So let's take a look at all of the aforementioned changes, from least notable to how-could-they-not-include-that?!

Though, warning: Before you read any further, know that this is a very spoiler-heavy post, so if you haven't seen the movie (or read the book) yet, proceed with caution.

The Foxmans have rather inexplicably become The Altmans. Oh, and Alice is now Annie and Jen is now Quinn, I guess?

Speaking of inexplicable: Wendy's son lugs his training potty around with him everywhere and pops up as comic relief intermittently throughout the film.

Things kind of get switched around. In the book, it was Judd who pined after Penny back in high school. In the movie, it was the other way around. I'm not quite sure why Tropper decided in his screenplay to make Penny the lovelorn one (I mean come on, they almost made it feel like Jason Bateman was settling for Rose Byrne. Really? Really?), but they did.

Also, their split is much more ambiguous in the book, while the outlook seems bright (or, at least, bright-er) in the movie.

6. Phillip doesn't randomly sing song lyrics at the drop of a hat

And thank goodness for that.

Another welcome change — in the book, much of Judd's first-person inner monologue consists of how long it's been since he had sex, how great so-and-so's ass is, how "bee-stung" someone's lips happen to look, etc. I'm sure a lot of this was lost in the switching of the formats (because how gross would it be if he were saying all of those thoughts out loud?). But the film omitted some of his creepier moments. Most notably, he doesn't ruminate on the tanned legs of his teenaged second cousins or have sex with his sister-in-law.

4. Hillary's breast implants are a much bigger deal

They became the butt of pretty much any tender embrace Jane Fonda happened to share with her brood of messed-up children. That said, the running gag paid off big time, in that it lead to a pretty hilarious moment in which Fey cops a major feel from Fonda. Comedy at its best, people.

Because when you have Tina Fey, you need to use her as much as you damn well can. Her role was slightly expanded from the character in the book — she's present in a lot more scenes, and she has more one-on-ones with Judd. Also notable? It's Wendy, not Phillip, who has the honor of punching Wade in the face. Why? Because Tina freakin' Fey, that's why.

2. Paul's character gets scaled back

It would seem that we can't have it all — in an ensemble comedy, someone has to get the shorter end of the stick. Paul's backstory was hinted at, but we don't see the full impact of his life-changing injury, and his subsequent tension with Judd. We also see less of Horry (which is a shame, because Timothy Olyphant is super handsome, traumatic brain injury and all).

And finally, the number one way the book and the film are different:

I have to say, I walked into the theater so stoked to get to see Jason Bateman shove a chocolate cheesecake up Dax Shepard's ass, but alas, we didn't get to see Wade howl bloody murder as the deadly combination of birthday candles and lube set his balls alight.