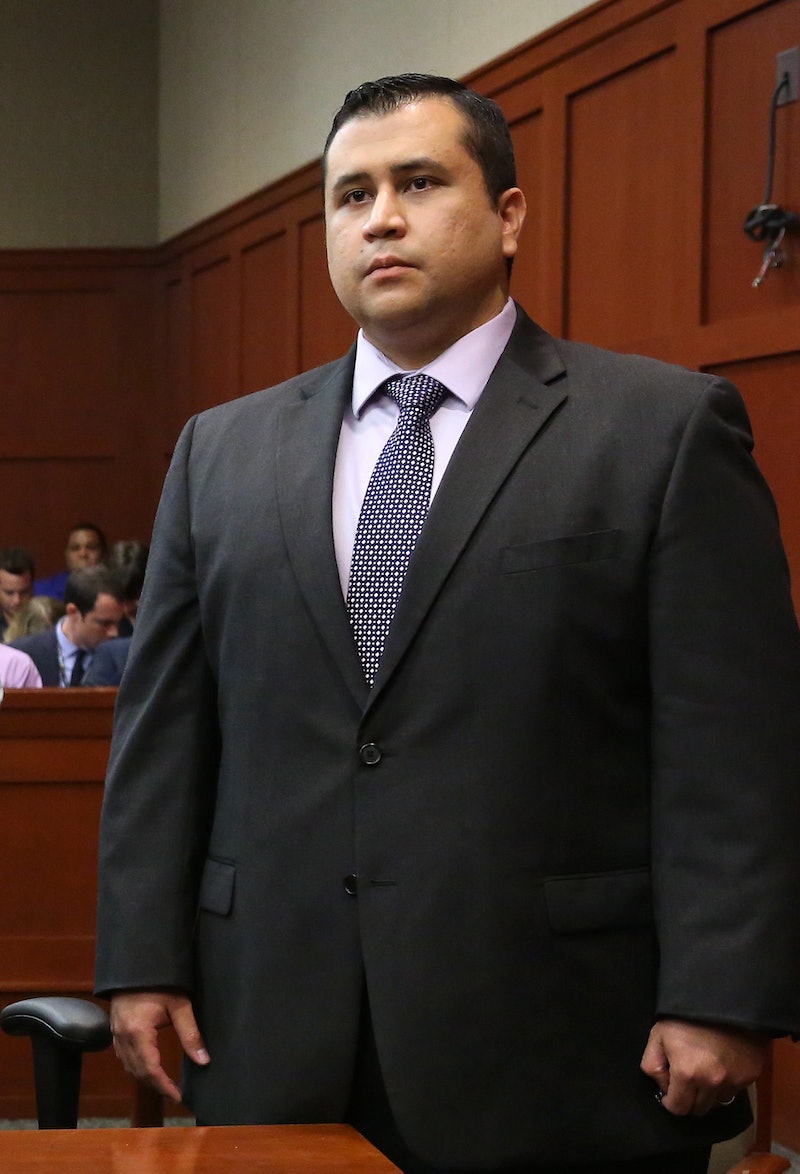 Um. We can think of smarter ways for George Zimmerman to have made his first public appearance since his acquittal.

Here he is, in a gun factory, grinning beside an employee of said gun factory, after walking around for a while deliberating buying a shotgun.

Since his explosive acquittal of the second-degree murder of Trayvon Martin two months ago, Zimmerman has been laying relatively low. His family has told press that he's received numerous death threats, and he's only popped up briefly to — bizarrely — to help rescue a family trapped in an overturned vehicle on a Florida highway. (The family has refused to confirm any connection with Zimmerman.)

Apparently, Zimmerman was shopping at the Kel-Tec manufacturing company on Thursday in Cocoa, Florida. TMZ reports that he asked questions about the legality of buying a shotgun, and was taken on a tour by an employee. (According to the manufacturer's website "Kel-Tec does not offer tours and does not allow customers to shoot at the factory range. Special arrangements can sometimes be made for Military, Law enforcement, or Educational purposes only.")

Zimmerman already has at least one gun. The PF-9 firearm that was used on Martin has been returned to him, and when an officer apparently caught him speeding in late July, he noted that Zimmerman was carrying a gun in the car's glove compartment. (When the cop asked where Zimmerman was going, he answered "Nowhere in particular.") At this point, the gun used to shoot Martin was still being held as evidence, and hadn't been returned to Zimmerman.

So, why does Zimmerman need all these firearms?

(TMZ originally reported that Zimmerman visited with his attorney, Max O'Mara, but O'Mara insisted he was in court all day.)

O'Mara said that Zimmerman had "even more reason" to carry a firearm after his client's acquittal on July 13. "There are a lot of people out there who actually hate him, though they shouldn't," he said. (Zimmerman's family have claimed that he gets 400 death threats every minute via social media.)

He's a free man in the eyes of the court, but he's gonna be looking around his shoulder for the rest of his life. There are people that would want to take the law into their own hands as they perceive it, or you know, be vigilantes in some sense, they think justice was not served, they won't respect the verdict no matter how it was reached and they will always present a threat to George and to his family.

Best to pose for photographs as a precaution then as well?