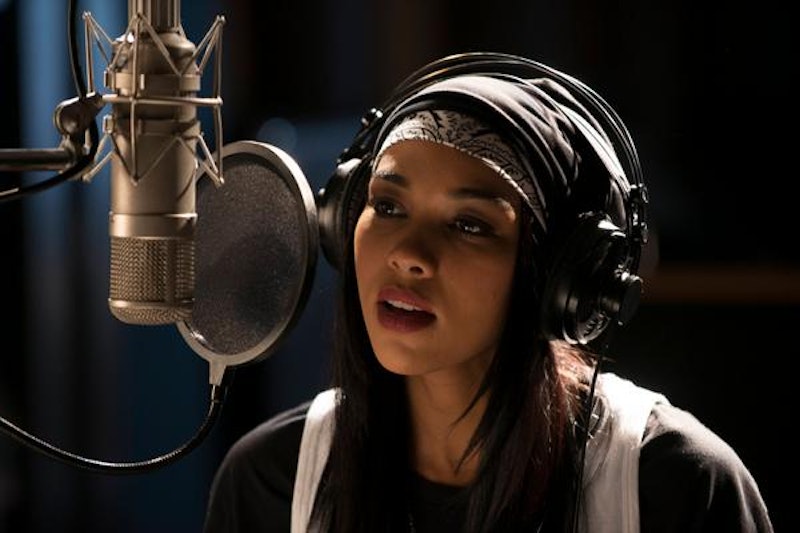 It should have been clear after the Brittany Murphy biopic that Lifetime aired to great controversy that they probably shouldn't do that again, but I guess I was a little late on the uptake. As it turns out, Lifetime's Aaliyah biopic, which has been hotly protested not only by Aaliyah's fans but by Aaliyah's family, is very much back in production. In fact, Lifetime released the first photo of Alexandra Shipp as Aaliyah and even set a release date for the biopic of November 15. When Disney Channel star Zendaya dropped out of the lead role due to her status as a huge Aaliyah fan preventing her from being okay with disrespecting the family's wishes by appearing in the biopic, Lifetime easily replaced her. I knew that, but I suppose some part of me was hoping they would end up shelving the project entirely.

I'm not the only one who is surprised that Lifetime is still moving forward with the biopic. After all, Aaliyah's family very clearly spoke out against the biopic for the very understandable fact that they aren't involved in the making of it at all and thus get no say in the portrayal of the late pop star. There's also the small note that they feel Aaliyah's story is big enough to be worthy of a box office opening, but that is neither here nor there. When Lifetime tweeted the photo of Shipp, it didn't take long for fans to start criticizing them.

In fact, the most positive tweets sent out in response to the announcement merely hoped the biopic was less disrespectful and boring than the Murphy biopic, which doesn't bode well for ratings when the Aaliyah biopic actually airs. Lifetime is doing a pretty good, though unintentional, job of alienating their audience. Fans of Aaliyah seem, at least vocally, unwilling to watch a biopic that isn't sanctioned by her family. Fans of Lifetime biopics might be hesitant about checking this one out after the one about Murphy.

The controversy surrounding the Aaliyah biopic has so many sides to it, from the family's criticism to their lead star bowing out and needing to be replaced, that the fact that no attempts have been made to reach out to the family and involve them in the rest of the production is a little surprising. Even if a trailer for the film comes out that proves it's as true to life as a biopic can be without consulting people who actually knew the late pop star, it will still leave a bad taste in people's mouths due to the fact that the family is so against it. Right now, the Aaliyah biopic is fighting an uphill battle to the kind of ratings that would make it a success.

Then again, controversy can sometimes be a huge drawing factor to television shows and films. Negative press is still press and people might check out the Aaliyah biopic just to see how disrespectful it ended up being and if it deserved all of the hype it has been getting. Perhaps that's the desired marketing strategy here, since it's not as though they can just cease and desist on production when they've already presumably sank a lot of money into the creation of the biopic. At the end of the day, the biopic might not have Aaliyah's family's approval but hopefully it will be tasteful anyway. If it's not, well, the people of Twitter have never had a problem giving their opinions.

Check out the first photo of Shipp below.