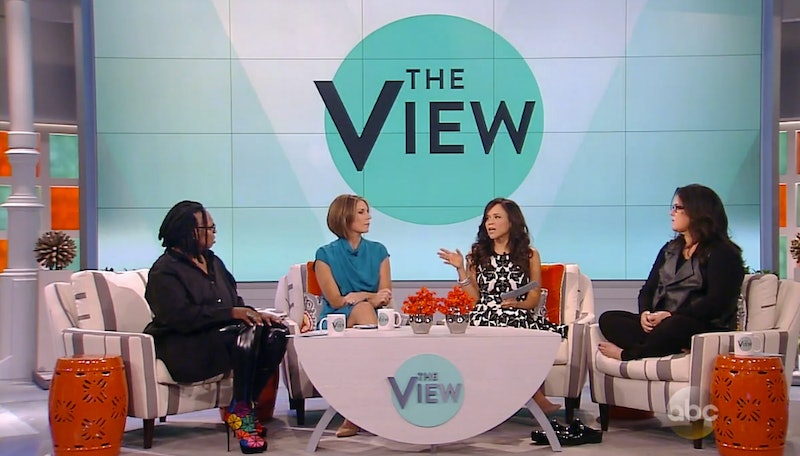 The View might be one of the highest-rated feminist talk shows on television, but when some people look at the show all they see is a panel of women. And, apparently, that panel of women constantly need to be doing what it is that women do: fighting with each other. To be fair, there have been notorious feuds on The View that still carry into the present day, such as Rosie O'Donnell's infamous feud with Elisabeth Hasselbeck, but apparently the co-hosts can't get along too well without someone making something up. For example, there are current reports that O'Donnell and Nicole Wallace are feuding backstage after an onscreen political debate got heated.

According to a representative for ABC, those reports are "absurd". The View has only been on for a week and already has enough controversy going down after the decision to rehire O'Donnell, so why someone decided that some backstage drama was needed as well is beyond me. Of course, this isn't the first time there have been stories of hosts, past, present, and future, hating each other or being at war. It's just the most recent. In light of that, let's take a look back at some of the best feuds reported from The View and whether or not they were just the latest entry in the universal desire to see women competiting against each other.

What Happened: Star Jones and Barbara Walters went to war in 2006, when Jones was one of the co-hosts of the show. According to US Weekly, Jones announced she was leaving The View ahead of the schedule that Walters had planned for her and later went on to criticize her about her memoirs.

Was It Real: Oh, it was real all right. However, both women have apparently moved past Jones' departure from the show and Jones was even welcomed back to discuss it six years later.

What Happened: Whoopi Goldberg was quoted in 2013 as saying that Goldberg doesn't care who replaces Hasselbeck on The View and there was also an incident on the show in 2007 in which Goldberg belittled Hasselbeck's views on abortion.

Was It Real: Considering that was all that this feud had to work with, it's no wonder that it wasn't even a real thing. Just because two women disagree on a subject doesn't mean that they're at war.

What Happened: Honestly, what didn't happen? O'Donnell and Hasselbeck were at each other's throats on and off the show so often that O'Donnell abruptly quit co-hosting The View in 2007. And it's not over yet. When Hasselbeck found out that O'Donnell had been rehired to The View, she criticized the decision and O'Donnell fired shots right back at her on Twitter.

Was It Real: It's so real we have no idea when it's going to end.

What Happened: O'Donnell and Walters were rumored to be at each other's throats in 2007, around the same time as her feud with Hasselbeck. Their show-related disagreements were so pervasive that O'Donnell was even quoted telling Walters to retire because Walters is "almost twice my age". Ouch.

Was It Real: O'Donnell and Walters definitely didn't see eye to eye and they were both open about admitting that.

What Happened: Word of a feud between O'Donnell and Sherri Shepherd began to circulate when O'Donnell allegedly made fun of Shepherd for an episode in 2007 when Shepherd said that the earth was flat. Shots fired.

Was It Real: Considering that was the only evidence of there being any bad blood between O'Donnell and Shepherd at all, I'm calling imaginary feud on this one. The View is a show all about giving unique women a place to air their opinions on a feminist-friendly show, so it's sad to see how often it ends up dissolving into imaginary catfights in the media's eye.