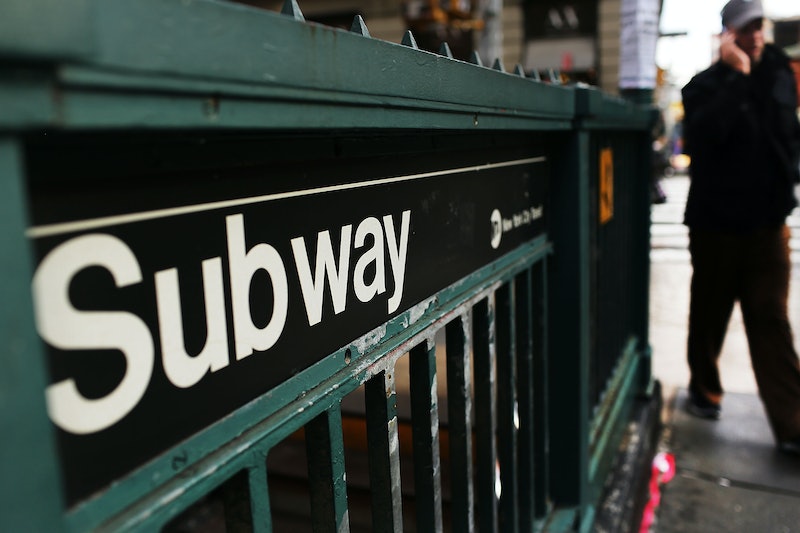 If you ride the New York City buses and subways, it's time to prepare yourself for a politicized change of scenery. Starting next week, anti-Islamic ads will be installed on 100 NYC buses and in two subway entrances — at East 59th Street and Lexington Avenue and the Columbus Circle Station — thanks to a 2012 federal court ruling that required the Metropolitan Transit Authority (MTA) to run controversial, issue-based ads.

One of the six new advertisements' layouts feature two images. The first is of a young man wearing a bright red tracksuit, surrounded by recording equipment. Beside this picture is an image of American journalist James Foley, minutes before he was beheaded, alongside his masked executioner. According to the ad, the man in the first frame and the man alongside James Foley are one in the same: The image on the left shows him “before he became a jihadist” while the one on the right shows him “after becoming devout.”

Another hateful ad in the campaign features a photo of Adolf Hitler talking with a pro-Nazi Palestinian leader and offers a headline: "Islamic-Jew Hatred: It's in the Quran."

These new ads — funded by the American Freedom Defense Initiative (AFDI), a group led by anti-Islamist blogger Pamela Geller — call for the U.S. to halt foreign aid to Islamic countries. According to ABC News, Geller said the ad campaign aims to “tell the truth about Islam and Jihad" that that "U.S. government and mainstream media ignore.” Right. In total, this ad campaign is costing Pamela Geller and the AFDI $100,000.

This isn’t the first time that the AFDI has brought its anti-Islamic rhetoric to NYC’s public transit. In 2011, the AFDI submitted pro-Israel political ads to be featured on city buses and subway ad spaces. When the MTA rejected the ads under its No-Demeaning Standard Act — which dismisses ads that demean certain disfavored groups or peoples — the AFDI sued the MTA, claiming that the transit agency was violating both their First Amendment rights and the Equal Protection Clause.

By September 2012, the District Court ruled the No-Demeaning Standard Act unconstitutional, and declared that the agency could no longer refuse controversial ad proposals. Under the protection of the court ruling, the AFDI has resumed its campaign efforts — first posting controversial subway ads calling enemies of Israel, “savages,” back in 2013, and now with the James Foley–centered ads a year later.

Each of next week's ads will feature a disclaimer that the views represented in the advertisements are not a reflection of the MTA’s own views, and further are not endorsed by the agency. We'll see.