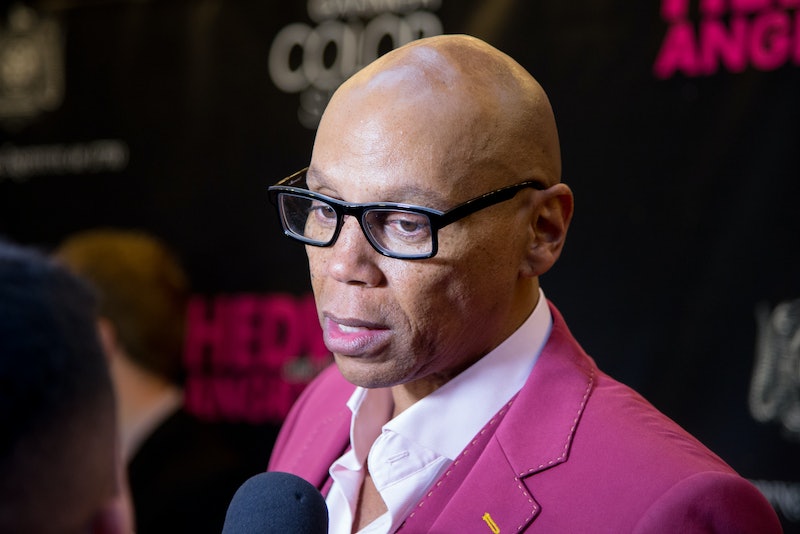 As should be expected, Reddit RuPaul is funny, affectionate, and wise in equal doses. RuPaul's Reddit AMA on Thursday garnered a ton of questions, ranging from the serious to the ridiculous. Fans were curious about the next season of RuPaul's Drag Race, as well as about his past experiences. Ru answered all with typical good nature, offering lots of sage advice along the way. He even signed off from the internet interview with some lovely words of wisdom: "Mama Ru gotta go right now, kiddies. But in the meantime, love yourself. Because if you can't love yourself, how in the hell you gonna love somebody else? Can I get an Amen up in here?"

But there's also way more where that came from. Here are some of the highlights from RuPaul's Reddit AMA.

On the next season:

dilettwat: At the Season Five premiere party, you were giving an interview about the upcoming season, and your exact words were, "We discourage kai-kai, but two girls fall in love on the show." In that spirit, could you tell us two lies and a truth about Season Seven? ;-)IamRuPaul: Let's just say... season seven will rock your socks.

collyblom: One of my favourite things about Drag Race is that it skewers other TV (and more specifically reality TV) shows. Which shows can we expect to be referenced in the upcoming season? Fans have been speculating about Shark Tank and Dancing with the Stars…IamRuPaul: SCANDAL... It's Always Sunny in Philadelphia... and Workaholics.

Sakura_7: Who's your favorite superhero?IamRuPaul: I love Superman. Because he represents the hero with 1,000 faces. And the potential that lies in every human on this planet.

brunosssaur: What's the fondest childhood memory you have?IamRuPaul: The time my sister Renetta took me to the Canyon with a paper bag of cookies and a blanket, and told me "Ru-ru- this is a pic-nic."I was 5 years old.That's when I first learned about magic. Because to anyone else, it would be a paper bag and a blanket. But Renetta turned it into a magical event by calling it a pic-nic.

KelliBuck: Hey Ru! I loved you in But I'm A Cheerleader. What was your favorite part of working on that film?IamRuPaul: It would be watching Eddie Cibrian's booty in those cutoff jeans.

PittsburghGirl22: First I would love to say that I adore you. My question to you is what is the greatest piece of advice you've gotten from anyone, famous or non?IamRuPaul: My tenth grade teacher, Mr. Panell, told me "RuPaul, don't take life too effin' seriously." I didn't fully understand it at the time, but boy, oh boy, do I understand that now.

ltgc: I just wanted to thank you for being who you are. I still have a lot trouble fully accepting and loving myself like you often preach (amen) but you have helped me greatly in getting where I am now. When I’m having a dark day your love, compassion, and strength always shines a light and I’m sure countless others can say the same. I write this as I’m blaring The Beginning at work by the way. You are one hell of an example to follow and for providing that, again I thank you a hundred thousand times! What keeps you so happy, loving, and compassionate? Anything you do daily/when you’re feeling down?IamRuPaul: Yes. I start the morning with my yoga stretches, prayer, and meditation. The main thing that motivates me is laughter, and colors, and music, and dancing! And I do all of the above every day.

filthy_fuckin_gaijin: Hey RuPaul, extra question here, I'm a girl, can I be a Drag Queen? I get really jealous watching DragRace and I want to be one too!IamRuPaul: You're born naked, and the rest is drag! EVERYBODY is in drag. Whether you're a man or a woman. It just depends on how extreme you wanna go.

HeyitsDuckman: How can I channel my inner queen to be successful in the workplace? Keeping in mind, I can only wear closed toe shoes and no heels.Seriously, though.IamRuPaul: HAHAHAHA!Try sexy underwear.

And some other tidbits:

gayballsmcgee: Why did you decide to go by your real name, RuPaul, instead of taking on a drag name?IamRuPaul: Because I was stupid. It's important to use a stage name so that your real name doesn't appear on public records.

eedoubleyou: Can you PLEASE reprint "Lettin It All Hang Out" ?? It's going for $140 on Amazon and I'm unemployed and I haven't found it cheaper and I love you so much.IamRuPau: It was selling at my popup store here in Hollywood for twenty bucks! If you PM me your email address, Victoria will help you get one from me.

chocolatechipbutt: what was it like meeting Kurt Cobain?IamRuPaul: He was a real sweetheart. And he told me that he had come to see my nightclub act, in Seattle, but got there two hours too late! Haha! He had no idea that they put me on at the club so early. So he completely missed me. But he was a real sweetheart, a real kind soul. And he actually - we worked together again on SNL, you know, later on that same year. And he and the rest of the boys were absolutely fabulous, so lovely, and they really appreciated what I was doing, I think mainly because he thought outside the box and understood that, you know, what drag is at its core, totally punk-rock.

HoserUSC: As someone who has creativity, uniqueness, nerve, and talent in spades, you must have an amazing home wifi network name; what is it???IamRuPaul: HAHAHAHAHAHAHAHAHAhaha