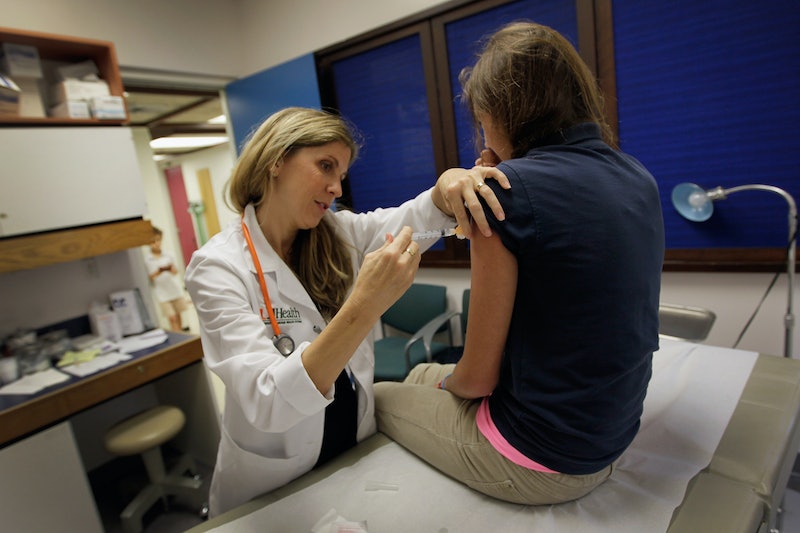 Finally some good news for women in the workforce: despite the gender wage gap, at least some of us are still bringing home the bacon. On Wednesday, Business Insider released a list of the 20 highest paying jobs for women and their accompanying salaries, all of which exceed or come close to reaching six figures. The list comes from a PayScale report that focused on jobs where women comprised at least 40 percent of the workforce. OB/GYNs came in first with a median salary of $195,600, followed closely by psychiatrists and general practice physicians.

From these top three titles alone, however, we can already sense a pattern. The list reflects an overwhelming presence of STEM (science, technology, engineering, mathematic) fields, and a particular emphasis on those in the healthcare industry. PayScale's lead economist Katie Bardaro tells Business Insider that this is because "men and women have an equal shot at earning high wages in comparable [healthcare] positions." Healthcare, then, appears to be a trailblazer in bridging the pay gap between men and women, and this news portends to be extremely promising for those in the industry.

But, women still make up a paltry 28 percent of workers in the STEM fields — due to the fact that such fields tend to be male-centric (talk about a vicious cycle), the fact that they are railroaded into non-STEM fields, the fact that they are actively discouraged from taking STEM paths professionally. So while it's good to know that women are earning good money from taking these professional paths, it's still true that not nearly enough women are doing so. We should be equally represented in these fields so that more women achieve the financial stability these industries afford.

Over the years, research has shown an increasing number of women migrating from the humanities to STEM professions. Take, for instance, the data collected by Benjamin Schmidt, a graduate student at Princeton and visiting fellow at Harvard. His chart below suggests that the the decline of the humanities (and presumably its wages as well) is the result of women transitioning to other fields.

But this shift is not enough. On average, people working in the humanities earn around $32,000 less than those in STEM fields. And we can assume that, if woman are making 78 cents to every man's dollar, they are on the lower end of that average. Non-STEM positions are heavily absent among the more lucrative positions in this day and age, and those who remain in the humanities seem to have a ways to go before they can break into Business Insider's "Top 20" list. We need to direct more women into these lucrative fields, both so that they can reap the financial rewards, and so that they can put their stamp on the fields of science, technology, engineering, and math.