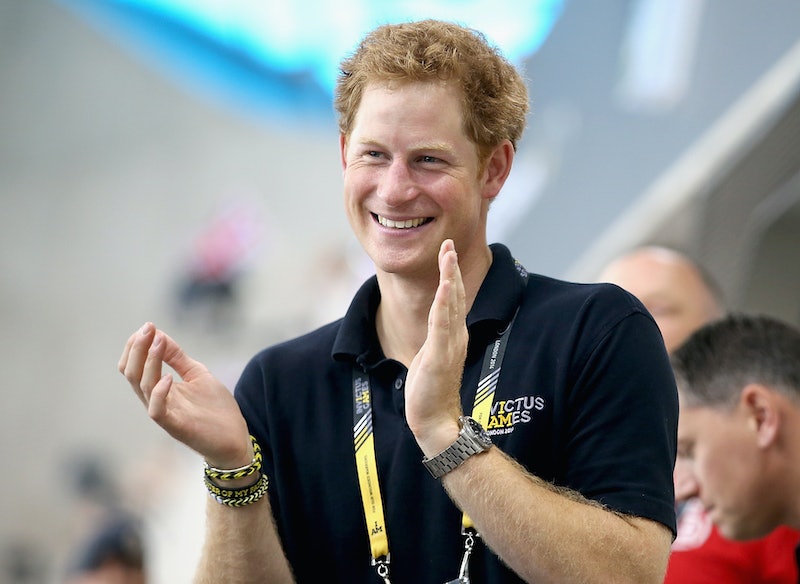 While some of us may dream of sitting on Prince Harry's shoulders at a concert, this is literally what happened to Isabelle Nixon, age five, at the Invictus Closing Ceremony Sunday night. (Well, guess it makes more sense for a child, anyway...) Reportedly, Isabelle was visibly upset when she could not see the Foo Fighters performance, when Prince Harry picked up the five-year-old girl and put her on his shoulders so she had a better view. Isabelle’s father Adam Nixon, a wheelchair basketball player who had met Harry earlier in the day, remarked, "There was no calculation to it. He just recognized her from earlier and lifted her up on his shoulders so she could see. It was a bit of a whirlwind. It was very surreal."

But what does little Isabelle think of the experience? What was racing through her mind during the concert? Of course, I wasn't able to each out to a five-year-old for comment, but I imagine she was thinking something along these lines:

I can’t see anything. What’s the point of being at this concert if I can’t even see the performance. Mom and Dad are making wear these big headphones, so now I can’t see and I can’t hear?

Whoa. How did I get up here? I’m so high up. This view is not bad. I can see everything now. Look at me, bopping around at my first concert. This is so fun. Prince Harry? That is not Prince Harry. Do all gingers just look alike, or… Yes, it is him. It’s really him.

Does this make me a princess now? I know I would look great in a crown. Princess Isabelle... I like the sound of that. I can help babysit Prince George!

I hope he holds me up for the whole concert. It would be awkward to see some songs and not others. I’m just going to keep smiling and hope my parents are taking pictures. This would get so many likes on Instagram. Oh no, the concert is over. Now what? Can I just hang with my new best friend?

I’m down on the ground again. Ugh. I should say something to him. I should really think of something cute to say. Maybe we can keep in touch through Twitter?

I just danced with a prince. My friends are going to think I am the coolest girl in school.