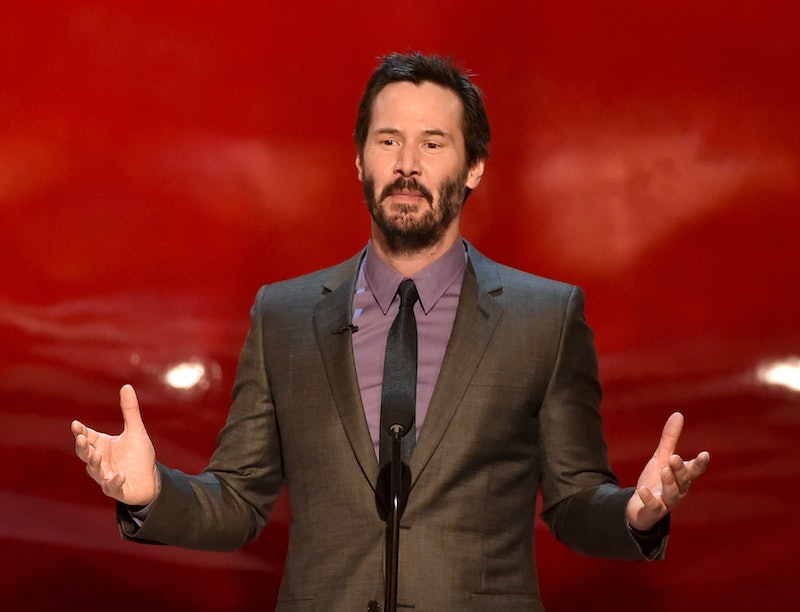 In the chillest move from the King of Chill, Keanu Reeves dealt with a home intruder in the calmest way possible. Apparently in the early morning on Monday, Reeves heard someone breaking into his home library, and when he went to investigate, he found a woman had broken in and was just... sitting in a chair in the room. The woman was in her forties and, eerily, totally silent. But not to worry, because Keanu totally handled it. He had a little chat with his #1 fan, who reportedly said that she was there to see him. Reasonable. Reeves then called 911 and spoke in a way (in code?!) that wouldn't let on to the woman that she was about to be hauled out of there.

Someone buy the film rights for the shortest Keanu Reeves movie of all time! Is anyone surprised, though? Reeves is notorious for his roles as super zen men, man. Even when faced with panic and chaos, he seems to be enlightened, or at least, zonked out. So I have to ask — how would Keanu Reeves as all the chill dudes he’s played through the ages react to a stalker in his library chair?

As Ted from Bill and Ted's Excellent Adventure

Theodore Logan would probably be like, "Whoa. Strange things are afoot in my library." Then play out the stalker with a horrible guitar riff.

As Jack from Speed

Call on his good friend Sandy Bullock to crash a bus at exactly 50 mph into his library. While wise-cracking, of course.

As Neo from The Matrix

OBVIOUSLY don his coolest cape and wraparound sunglasses and slow-mo bullet her ass out of there.

As Julian from Something's Gotta Give

Startle the crap out of his intruder by inviting Crying Diane Keaton into his home.

As Alex from The Lake House

Um.... travel back in time and begin a relationship with stalker through a shared mailbox and convince her not to break in? In moody tones? Or something. I'm not really sure. Can someone explain the plot of The Lake House to me?