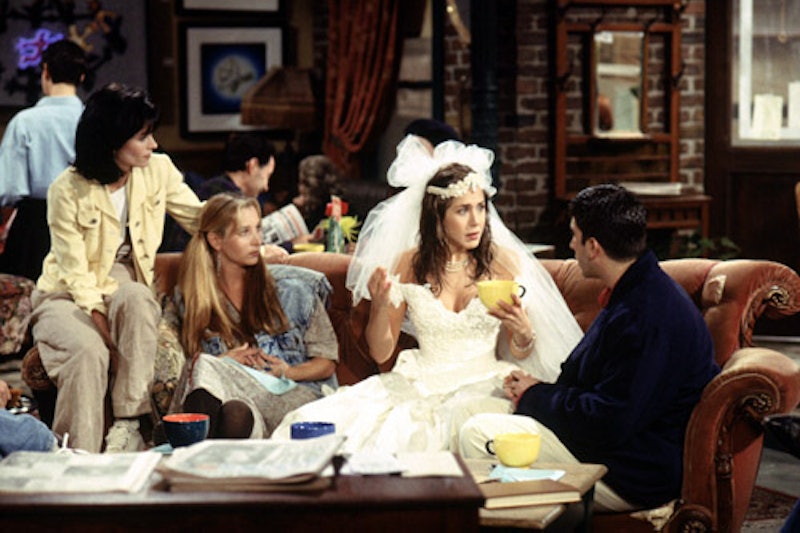 20 years ago Rachel Green ran into Central Perk in a sopping wet wedding dress. That's right, the iconic first episode of Friends aired 20 years ago and there's nothing more fun to do than mock the 90s outfits of the cast. Of course, not everything is out of style. Actually even two decades later a lot of the clothes the six friends wore are back in style. Hello crop tops, chambray shirts, and chunky knit sweaters. But, as much as we love them, the characters' fashion sense from season one wasn't all stellar. In fact, the pilot episode featured some pretty terrible clothing choices. From Rachel's puffy wedding dress to Monica Gellar's beige-on-beige-on-beige ensemble, I've ranked the worst outfits in the Friends pilot. Basically they run the gamut from, "How you doin'??" to, "Could those clothes be any more awful?"

Over the course of the 30-minute pilot, each character wore about two to three different outfits so I factored them all in to arrive at my worst dressed character. The girls had a worse time of it because the costume designer clearly liked them to take fashion risks, while the guys' worst offenses were more in the range of light wash jeans and oversized button down shirts.

So here are the characters ranked from best to worst in terms of their pilot episode outfits:

Chandler was the least ill-dressed. Sure he wore a striped polo shirt with backwards baseball cap at one point, but as a corporate office worker most of his wardrobe was suits and ties. Nothing much wrong with that in the 90s or now.

Oh Joey. That season one shaggy hairdo of his is still pretty attractive. Plus his whole black t-shirt, leather jacket thing is right out of Grease and still pretty rocking. Probably no one but Joey could pull it off, but somehow he does. Unfortunately he made one major misstep which was a sleeveless vest (with some brand logo on the back no less) and a sleeveless shirt. Yuck.

He was pretty frumpy for most of the show. Lots of baggy button-down shirts. He was doing pretty average on the awful outfits meter when he busted out a white button-down monstrosity.

It was about six sizes too big making him look like John Darling from Peter Pan.

That wedding dress wouldn't be half bad if not accompanied by that monstrous, puffy white veil. Throughout the rest of the episode she had a pretty basic wardrobe, (button-downs, skirts, pajamas) but that wedding dress is what we all remember from the pilot. It left it's puffy mark on us forever.

Monica had a beige thing happening this episode starting out with a beige blazer (shoulder pads included) over beige pants held up by suspenders. (Ew.)

Later she changed into a long beige dress over a beige t-shirt with a beige sweater tied around her waist. Come on Monica you need some more color in your life!

I mean, are you surprised that she got the worst outfit? I love Phoebe's unique personality but with it comes some questionable fashion choices. Like the fringed oversized brown jacket paired with long skirt. Or whatever this stripey mess was:

For that alone she wins worst dressed, but she has such a unique self confidence that she probably wouldn't care if she landed number one on this list. In fact, she'd probably just write a song about it.