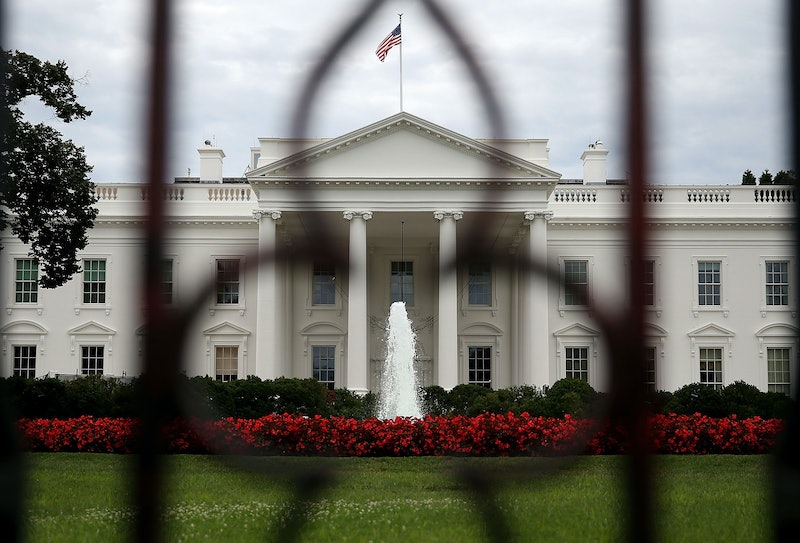 Despite initial claims that the man involved in Friday's embarrassing Secret Service security breach was unarmed, new reports show that the White House fence jumper carried a folding knife in his pocket. The knife is described as a Spyderco VG-10 folding knife with a "three-and-a-half inch serrated blade." 42-year-old Omar Gonzalez of Copperas Cove, Texas now being charged with "unlawfully entering a restricted building or grounds while carrying a deadly or dangerous weapon," and a US magistrate will hear his case on Monday. If Gonzalez is convicted, he could face up to 10 years in prison.

According to Assistant Public Defender Margarita O’Donnell Gonzalez spent an impressive "18 years in the U.S. military, including three tours in Iraq." His former stepson, Jerry Murphy, told the Washington Post that a third of that time was spent as a sniper in the Army Special Forces. Murphy continued,

He’s a very good guy. He is suffering from post-traumatic stress disorder. I don’t believe he had any intention in hurting anybody. He has served his country for years.

O'Donnell noted that Gonzalez "has provided service to his country and shown commitment in his life," but neither his stepson's nor his lawyer's entreaties have proven successful thus far.

Saturday's Secret Service affidavit that released further details about the security breach, including that Gonzalez told an officer "that he was concerned that the atmosphere was collapsing and needed to get the information to the President of the United States so that he could get the word out to the people." Luckily, Obama and the rest of the presidential family had left the premises just minutes before the incident, and were en route to Camp David for the weekend.

The breach, needless to say, has prompted a serious review of the state of Obama's security detail, which has been plagued with embarrassing shortcomings over the last few years. In 2012, 13 Secret Service members were sent home from Cartagena, Colombia when it was revealed that they had spent an evening drinking and engaging with prostitutes. Earlier this year, three more agents were placed on administrative leave after drinking so heavily that one was found unconscious in a hotel hallway.

And in this particular case, several standard security protocols seem to have been ignored, once again raising questions about exactly how safe Obama really is at any given point in time. For one, when anyone without security clearance gets across the fence, an alarm is triggered and can be heard by every on-duty agent. Four seconds within the sounding of this alarm, security dogs are expected to be released to stop an intruder, as canine teams are able to move much faster than their human counterparts. These loyal Belgian Malinois, selected for the intelligence and, ostensibly, their speed, are trained to knock down potential threats, and wait for their trainer to arrive.

But on Friday's case, no dogs were ever released to tackle Gonzalez. In fact, no one managed to apprehend Gonzalez until he entered the unlocked doors of the North Portico, the grand entrance that faces Pennsylvania Avenue. Seriously, it was unlocked. I lock my dorm room and the White House can't bother to lock its front door?

Supposedly, these doors often remain open because they are frequently used by entering and exiting guests, and moreover, generally considered impenetrable by anyone without authorization. That assumption, clearly, has been completely turned on its head.

The Post reports that it would take the average person 20 to 25 seconds to reach the White House from the fence. But an ex-Secret Service agent told Fox News that the feat was achievable in just five seconds, particularly if the intruder "enters between the two front-gate command posts."

Because agents initially believed that Gonzalez was not armed and did not pose a major security threat, no shots were fired as he raced across the lawn. Of course, having only 20 seconds to determine whether or not someone is carrying a dangerous weapon is a difficult task, and officers generally assess risk situations based on an intruder's clothing. Luckily for Gonzalez, he was not wearing anything baggy, nor was he carrying a backpack, and as such, agents exercised caution in their initial treatment of the suspect.

Following the incident, Secret Service director Julia Pierson called for more officers and further surveillance around the northern portion of the iron fence guarding what is usually considered the safest place in the world. These new security measures went into effect Friday evening, just in time to stop another incident on Saturday in which a teenager identified as Kevin Carr of Shamong, New Jersey also tried to enter White House grounds. Carr first approached security checkpoints on foot, then returned at a different gate in his car where he refused to leave and was arrested on charges of unlawful entry.

Although a White House statement released Saturday claimed, "The President has full confidence in the Secret Service," many others are growing increasingly dubious. Rep. Jason Chaffetz (R-Utah), who chairs the House Oversight and Government Reform subcommittee on national security, told the Post,

This is totally and wholly unacceptable...How safe is the president if this can happen? I just can’t believe somebody can go that far without being impeded. The perception they are creating is only going to inspire more security breaches.

For the sake of the president and of the nation, I can only hope that Chaffetz is wrong.

More like this
The Families Of Grenfell Tower Are Still Waiting For Justice, Five Years On
By Bustle UK
How A Political Staffer’s Death Became The Center Of Alt-Right Conspiracy Theories
By Gretchen Smail
5 Concrete Ways To Take Action Against The Rwanda Deportation Plan
By Rachel Mantock
How To Fight For Reproductive Rights, Based On How Much Time You Have
By Courtney Young
Get Even More From Bustle — Sign Up For The Newsletter