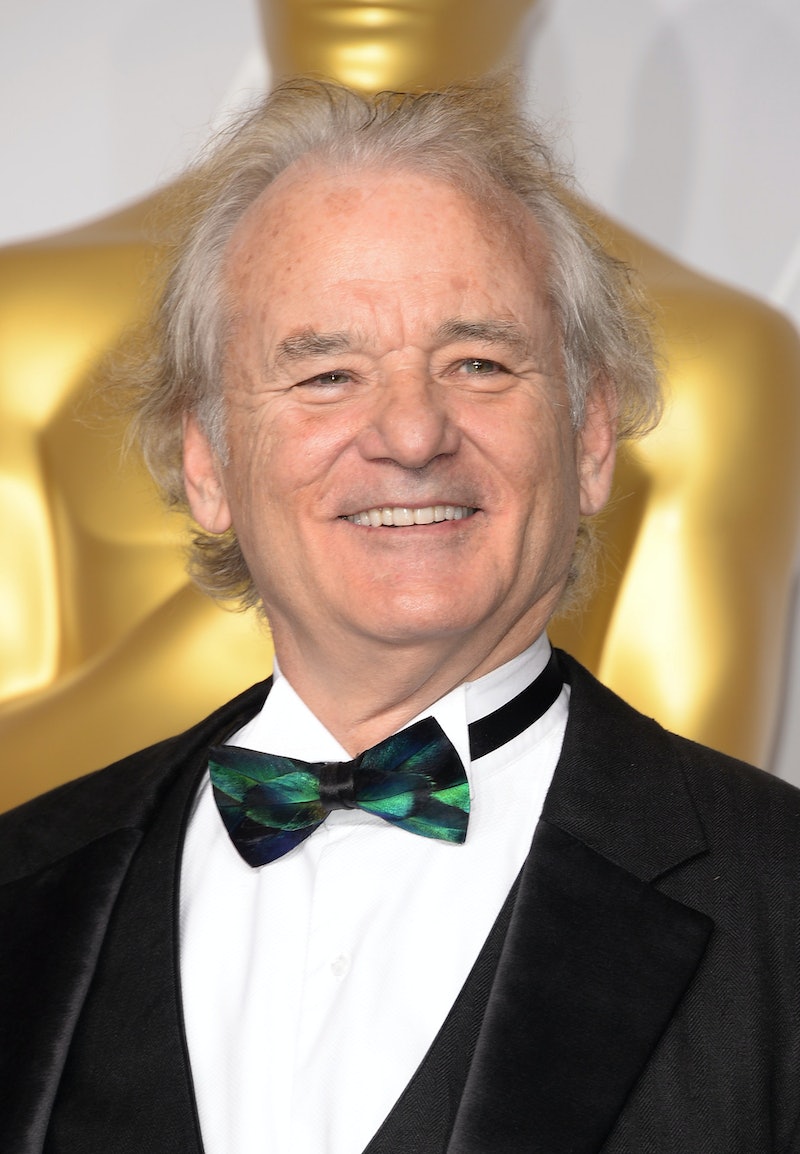 National treasure, notorious photobomber, and epic partycrasher Bill Murray turns 64 this Sunday, a day that may as well be called National Bill Murray Day. Bill Murray's pretty great. Known for his starring roles in classics like Caddyshack, Groundhog Day, Stripes, Lost In Translation, and Ghostbusters, among others, Murray isn't just the formerly-of-SNL, resident funny guy. Sometimes, he isn't funny, and he's not afraid to admit it, which is also somehow funny, and sometimes, Murray's just an all-around chill dude. Like when he shows up to take tickets at a minor league baseball game, or knows about selfies. He's the inspiration for quirky stories both made up on the internet and very, very real (sometimes both at once), and as his latest role in St. Vincent, he will never tire of being America's sloppy but lovable-hot-mess grandpa-uncle.

He's made a few real-life mistakes of his own, but as a grandpa-uncled wizened in the ways of the world, Murray seems to have gathered some essential tidbits on making said mistakes, relationships, and Cinnabons, and they're pretty good. Here's are some of the more essential pieces of advice Murray has dropped lately.

It's Bill Murray's birthday. TURN DOWN FOR WHAT.

"The secret is to have a sense of yourself, your real self, your unique self. And not just once in a while, or once a day, but all through the day, the week and life. You know what they say: 'Ain't no try, ain't nothing to it but to do it.'" ( Time Out , 2013)

"I made a lot of mistakes and realized I had to let them go[...]Don't think about your errors or failures, otherwise you'll never do a thing." ( The Guardian , 2005)

"I think if you can take care of yourself, and then maybe try to take care of someone else, that's sort of how you're supposed to live." ( Squawk Box , 2012)

Plan to be spontaneous.

"I live a little bit on the seat of my pants, I try to be alert and available[...]I try to be available for life to happen to me. We're in this life, and if you're not available, the sort of ordinary time goes past and you didn’t live it. But if you're available, life gets huge. You're really living it." ( Charlie Rose , 2014)

"As I once said to one of my brothers, 'This is your life, not a rehearsal[...]Somewhere there’s a score being kept, so you have an obligation to live life as well as you can, be as engaged as you can..." (Time Out, 2013)