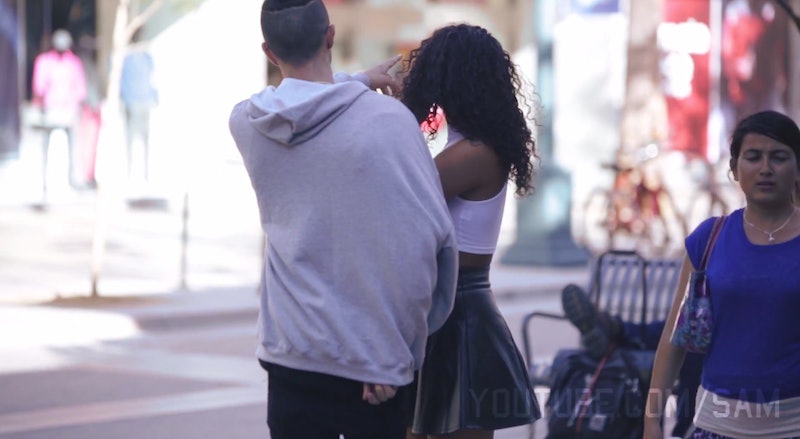 It is a genuine tragedy that we do not live in a world where the sexual violation of women is not a frequent, casual occurrence. Fortunately, we do live in a world where the response to said atrocities can be loud, fervent, and great. Sunday's example of this lies in Sam Pepper's awful "Fake Hand Ass Pinch" video — which I will not link to here, because it does not need or deserve your views — and in the beautiful calling-out that the YouTube community responded with.

Pepper's video, which was posted Saturday, followed the YouTuber as he walked a city street and groped women with a fake hand in the name of a "prank." The women reacted, understandably, with thinly veiled horror. YouTuber and generally awesome lady Laci Green spearheaded an open letter responding to and calling out the video's flagrant sexual violation, reaching out to other YouTubers through Twitter to join in the message. Among those who have co-signed the letter by the time this post was written include Hank Green, Tyler Oakley, Grace Helbig, Liam Dryden, and many more.

Thanks for taking the time to read this letter. As fellow YouTubers, we have much respect for others who put so much hard work into building their channel. It’s not easy, and you should be proud! That said, we’ve noticed that in your success, there has been a lack of respect in return…namely, for women and girls.

You may have noticed that your latest video “Fake Hand Ass Pinch Prank” has garnered considerable negative attention. In this video, you sexually violate a number of unsuspecting women on the street, many of whom are visibly confused and upset at being touched by you without permission. One woman even says “I don’t like that!” while you proceed to laugh and touch her more. In “How to Make Out with Strangers”, made a year ago, you pressure women on camera to make out with you - again, many of whom are visibly uncool with it. Confused and caught off guard, they painfully follow through with your requests, clearly uncomfortable. In “How to Pick Up Girls with a Lasso”, you physically restrain women on the street with lassos - many of whom look alarmed to be restrained by a stranger on the street.

You’d probably be alarmed too, wouldn’t you? Imagine someone on the street comes up and rubs their hand on your bottom, or a girl walks up to you with a camera and forces her mouth onto yours while you’re trying to figure out what’s going on. Imagine walking down the alley alone, when a guy much larger than you physically restrains you with rope and pulls you toward him. You probably wouldn’t like it, right?

The YouTube community is no stranger at this point in confronting its own issues of sexual abuse, harassment, and violation, so it was important and necessary to see so many leading members of the community respond so swiftly. As Green wrote in the letter (emphasis and link hers):

We are deeply disturbed by this trend and would like to ask you, from one creator to another, to please stop. Please stop violating women and making them uncomfortable on the street for views. Please stop physically restraining them and pressuring them to be sexual when they are uncomfortable. Please show some respect for women’s right to their own bodies. While it may seem like harmless fun, a simple prank, or a “social experiment”, these videos encourage millions of young men and women to see this violation as a normal way to interact with women. 1 in 6 young women (real life ones, just like the ones in your video) are sexually assaulted, and sadly, videos like these will only further increase those numbers.

We've gotta stand up for these things as we see them. And as the YouTubers here point out, sometimes we see them far too close to home.