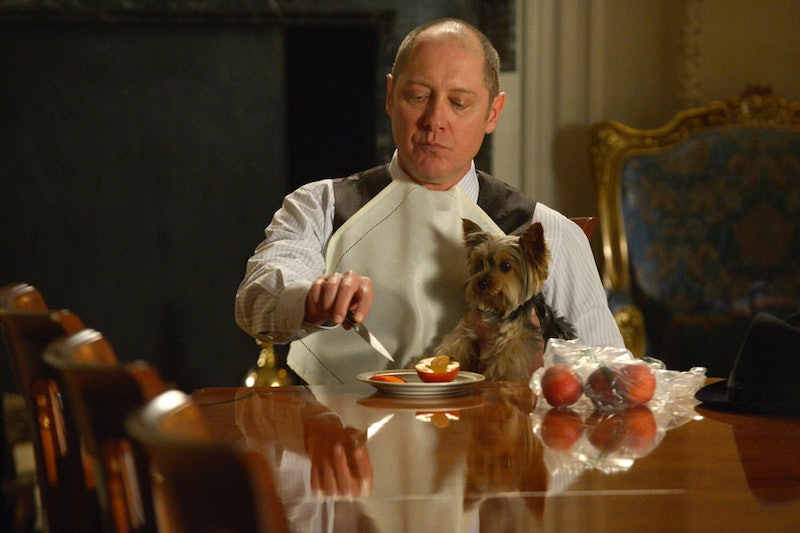 Of all the dramas that premiered in 2013, somehow NBC's The Blacklist was one of the unlikeliest breakout hits. And while it came as a surprise from the network known for comedy, The Blacklist blends just enough crazy elements to be a crazy hit. James Spader wearing the hat from the misbegotten Prime Suspect remake, playing an impossibly competent domestic terrorist mowing down his foes and named Raymond "Red" Reddington, perhaps the most fictional sounding name in all of fiction… How could this show possibly be bad? And, more importantly, how could perennial last-place network NBC have finally figured out a way to come out on top? Well, it seems like they've finely honed their formula of Sunday Night Football, The Voice, and The Blacklist well enough that once the ratings come in, they just might win the fall season.

And with ratings this good, it doesn't seem like that formula will be changing anytime soon, so it's time to get on board and start watching The Blacklist, everybody. But it's been a while since last May, when the show had its explosive finale, so whether you're curious and want to check out the Season 2 premiere on Sept. 22 before you get to the first 22 episodes on your DVR or you just have a terrible memory, catch up here first before The Blacklist comes back.

The pilot kicks off when Reddington, a longtime foe and former agent of the US Government, turns himself in to the FBI. He's decided that after years of brokering shady business between highly dangerous but completely unknown criminals that he wants to give up his contacts and betray them to the FBI. But, and here's where it gets TV drama-y, he only agrees to hand over his blacklist if he can work with rookie agent Elizabeth Keen, which he attributes to her father.

Week by week, Keen, Red, and their respective above and below board associates team up to stop various criminals on Red's list. The show becomes something of a standard action/procedural thriller, and every week brings a killer, criminal or mastermind who's eventually stopped by the combination of their skills and resources.

With all of the targets on Red's list to apprehend, the show mows through dozens of great actors hamming it up as international criminals. Some of the highlights include: Isabella Rossellini, Clifton Collins Jr., Tom Noonan, Robert Sean Leonard, Alan Alda, and Dianne Wiest.

In addition to the criminal-of-the-week format, The Blacklist also has a larger, serialized mystery at its core — why is Elizabeth Keen being drawn into the center of this? Her husband, Tom, is incriminated in a murder and Reddington ends up framed for framing Tom. It's complicated and confusing, and leads Elizabeth to break off her alliance with Red… until yet another high profile criminal shows up and they reluctantly reteam. But the formula is more or less over, as from now on the show starts to fully commit to the outright craziness of Raymond "Red" Reddington when he is betrayed by a mole and kidnapped.

Elizabeth's adoptive father dies, but not before he can share a cryptic message with Reddington about Liz finding out "the truth." Red roots out the mole in his organization and the one on the FBI team, warning Elizabeth again about Tom, which she does not heed. However, their marriage becomes strained as they abandon their attempt to adopt a child and a mysterious woman named Jolene begins pursuing Tom.

Jolene turns out to be Lucy Brooks, a woman who is both following and being followed by Red after he gets her name in yet another cryptic message (there are a lot of them on this show). While Tom rebuffs Lucy/Jolene's sexual proposition, he does eventually tell her that he is a double agent targeting Elizabeth, despite loving her. J'accuse! The two meet covertly to team up on their plans to apprehend Red for an individual known only as "Berlin." But Jolene is found murdered and while investigating her death, Elizabeth uncovers the truth: Tom was lying to her all along.

Even More Family Ties (Plus a Deadly Virus)

Spurning Tom and Red, in the last leg of the season Elizabeth takes over and kicks ass as she uncovers the truth: that Reddington was using the Blacklist as a chance to eliminate his enemies before they were able to team up and kill him, possibly using a worldwide outbreak of the deadly Cullen virus.

Ultimately, Red proves his devotion to Liz when he helps her capture Tom and Berlin — so they think. While both men escape, they renew their drive to hunt them down and there's even another hint that Reddington is actually Elizabeth's birth father. Whew. The Blacklist has more than enough for a debut season and left plenty to look forward to in Season 2.