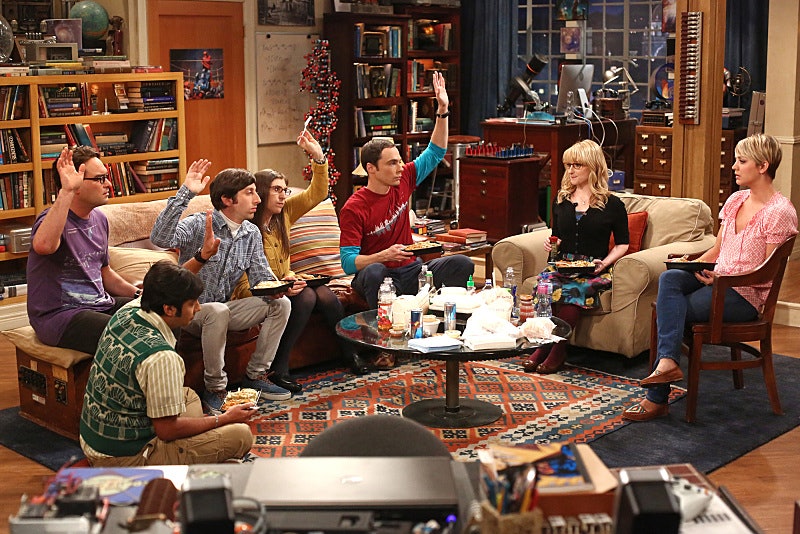 Break out those superhero costumes and Star Wars memorabilia, my fellow nerds — because The Big Bang Theory ’s eighth season premiere is mere hours away. Not days… not weeks… hours. Which means we’ll finally get to see what Sheldon, Leonard, Penny & Co. have been up to since last May (you know, other than getting a huge salary bump). However, before we immerse ourselves into what’s sure to be another fun-filled season, I thought it would be best to take some time to revisit all of the big moments that happened last year. Because, let’s face it — Season 7 turned out to be a pretty pivotal time for many of these beloved characters.

There were career shifts, proposals, and not to mention a long overdue kiss (on a train, no less). Yes, whether Sheldon likes it or not, things are certainly about to change for this lovable group of friends, which stems far beyond buying a dining room table. Let’s just hope the force (of friendship) is strong enough to keep these guys together. (Yes, that was my attempt at a Star Wars reference. You’re welcome.) But if you’re in need of a little refresher before we dive head first into the next season, here are the biggest moments from Season 7 worth remembering.

After years and years of researching String Theory without really getting anywhere, Sheldon starts to consider moving on to a different field of study. And like with pretty much anything that Sheldon does, it becomes a huge struggle since no other area seems to appeal to him. However, after a night of drinking, Sheldon wakes up to find himself pretty much spooning with a Geology book (as one does). I guess he found his answer.

Meanwhile, Penny’s motivation for a career shift was actually due to a proposal. Let me back up… Still having no luck on the acting front, Penny gets drunk and proposes to Leonard, telling him that he’s the only good thing in her life. However, when he hesitates in his response, Penny storms off in anger. And while the two are able to patch things up, it spurs Penny to quit her job at the Cheesecake Factory so she can devote herself to acting full-time. Leonard has doubts about her decision, but admires her courage in taking such a big risk.

If any of you had any reservations about Howard and Bernadette’s marriage, I guarantee all that changed once you saw… or rather, heard, this amazing scene. Due to an accident in her lab, Bernadette gets stuck in quarantine on the anniversary of her first date with Howard. But that doesn’t stop her dear hubby from bringing the romance to her. He and the rest of the gang surprise her by showing up outside her hospital room and performing a song Howard wrote for her on his keyboard. But describing this moment just won’t do it justice. You have to see all the adorableness for yourself. Warning: it will give you chills.

Amy and Sheldon Have Their First Big Kiss

No, this is not a Bazinga punch line, folks. Sheldon and Amy really did lock lips this past season. And I’m not just talking about a quick peck on the cheek. This was a full-blown, romantic (and dare I say, passionate) kiss. Amy’s plans for a romantic Valentine’s Day date on the Napa Valley Wine Train go awry when Sheldon spends all of his time talking to a fellow train enthusiast rather than her. Amy confronts Sheldon, who sarcastically tries to appease her by doing all of the “romantic” things couples are supposed to do on dates. He drinks some wine (“Mmm, grape juice that burns!”), stares into her eyes, and then finally kisses her on the lips.

But instead of pulling away quickly, he actually moves in even closer and appears to enjoy it. Obviously, this represents a major turning point for Sheldon, who has never acted on a sexual impulse before. (For all we know, the guy has never even had a sexual impulse until this very moment.) I’m not saying him and Amy are going to jump into bed together anytime soon (sorry, Amy), but this epic scene proves that we certainly shouldn’t discard the notion either.

Raj Gets Lucky in Love

When things with Lucy don’t work out, Raj tries his hand at online dating, where he meets a girl named Emily. Their relationship has a bit of a rocky start — Raj even ends up catching her on a date with another guy — however, the season leaves things on a bit of a high note for them after Emily agrees to spend the night at Raj’s place. I’ll let your imagination take it from there, but odds are we’ll be seeing her again next season.

Leonard and Penny Get Engaged While Sheldon Hits the Road

After finding out that she was legally married to her ex-boyfriend, Zack (Las Vegas marriages still count, people!), Penny quickly gets an annulment and begins to realize just how important Leonard is to her. So shortly after getting fired from her latest acting gig involving several gorillas (don’t ask), she vows to start making better decisions and suggests the idea of marriage to Leonard again — soberly this time. This prompts Leonard to get down on one knee and formally propose. (Say it with me now: “Awwww!!!”)

Sheldon, on the other hand, is forced to deal with some pretty hard truths. First, Leonard and Penny inform him that the three of them won’t be living together after they get married, which leads to Amy suggest they move in together. Then Sheldon's job notifies him that he’s actually not allowed to change his field of study, making him so upset that he considers quitting. And finally, he discovers that Stuart’s comic book store has burned down. So distraught by all of this bad news, Sheldon decides to leave town to figure out what he really wants. May the force be with him. (Nailed it.)