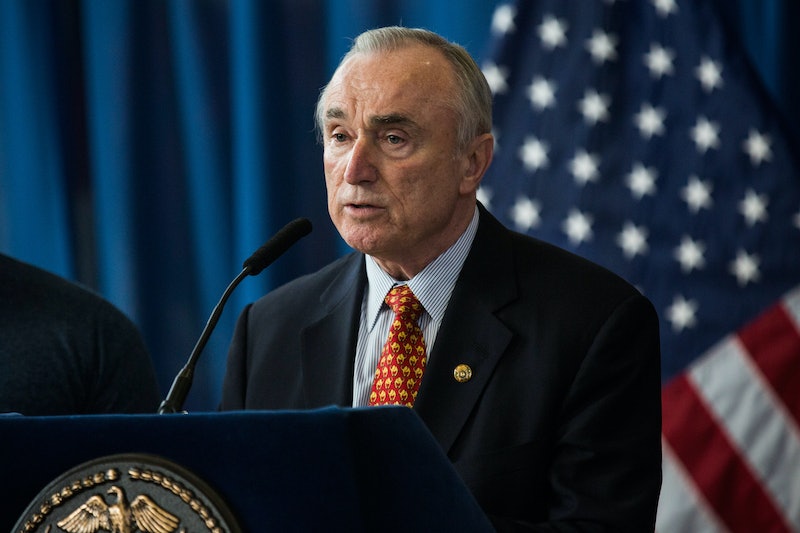 For most of us, potential threats from ISIS are terrifying — but theoretical. Not so, says New York City Police Commissioner Bill Bratton, who grimly reminds us of attacks like the Boston Marathon bombing as examples of how these threats can manifest on our home turf. His article may or may not help you sleep at night, but Bratton explained in The New York Daily News exactly how how New York is protecting itself from ISIS and other terrorist groups.

Bratton reminds us that neither the enemy nor its threat is just one entity. And though the Bush administration's War on Terror may have weakened and decentralized Al Qaeda, in the last decade Al Qaeda has strengthened through factionalized cells, including the Nusra Front in Syria and the Al Qaeda of the Arabian Peninsula (AQAP) in Yemen, whose main mission is plotting and executing attacks on the West. There's also Khorasan, the Al Qaeda cell apparently plotting to attack the West. "Today’s threat picture is more complex than at any time in the last decade," Bratton writes.

Bratton paints an ominous picture of how far and wide the extremist ideology has spread — we've all seen how effective ISIS' media strategies are — and how easily would-be terrorists can gain access to bomb-making instructions through online publications like Inspire. The latter inspired the Tsarnaev brothers to carry out the Boston Marathon bombing and Jose Pimentel to build a pipe bomb in his Manhattan apartment, which he was planning to use against the NYPD and returning U.S. veterans.

New Yorkers should know that no city has invested more in protecting itself from terrorism than this one, and that our resolve to keep this city safe is stronger than ever.

New York City has been the subject of 16 known terrorist plots since 9/11, many of which were thwarted by law enforcement. Bratton credits these efforts to the collaboration and information-sharing between the NYPD and its federal partners, particularly the FBI, the U.S. Secret Service, and the Department of Homeland Security. Cooperation with local departments like the New York City Fire Department has also been crucial. Bratton emphasizes that "we're all in this fight together."

The NYPD designates hundreds of officers to counterterrorism duties every day, making sure that vulnerable locations like subways, bridges, and tourist attractions are secure. The department's elite Hercules Teams, which was implemented by Bratton's predecessor, Ray Kelly, after 9/11, are deployed based on the day's intelligence report. The specially trained, heavily armed officers are meant to intimidate and discourage terrorists from carrying out their plots.

The NYPD-FBI Joint Terrorism Task Force includes 100 of NYC's detectives, many of whom travel overseas to examine terrorist sites and apply what they learn to the counterterrorism efforts back home. JTTFs exist well beyond the Big Apple, with 4,200 members in 103 cities nationwide. In addition to law enforcement, these task forces include investigators, analysts, linguists, SWAT experts, and other intelligence specialists who work together to share information on terrorist activities.