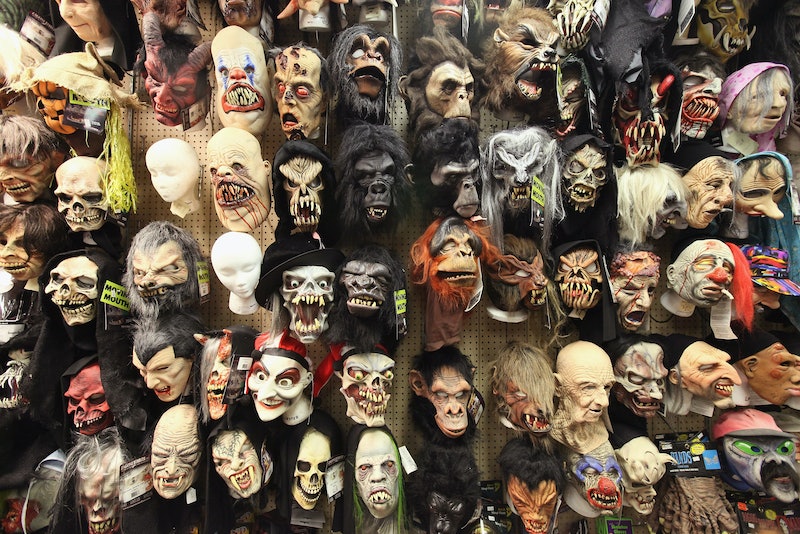 The scene is familiar: It's 12 minutes to midnight the night before Halloween, there's enough Halloween candy scattered around your home to feed an army of Walking Dead zombies, and you're staring dazedly at your closet in a moment of realization that you forgot to plan a costume. Unless you've decided to eschew the holiday completely, chances are at least one occasion on your October calendar is costume-strongly-encouraged, and no one wishes to be the sole person in the room wearing a nondescript sweatshirt and pair of jeans.

Luckily, this year the media has you covered in terms of quick and easy costume ideas. With the number of peculiar, incredible, and inexplicable phenomena which hit the news in 2014 (anything Miley Cyrus does, the second royal baby announcement, the nude clothing trend), anyone craving an original and fuss-free costume has no dearth of options. Even costume-phobes will be delighted with this year's infinite choices, as many of the most innovative looks barely require more than your average off-duty ensemble. The ice bucket challenge, for example, will win you points for creativity when all you need is access to ice cubes, heavily chilled water, and willing subjects. So take a deep breath, open your closet, and get ready to dress in your most inspired Halloween costume yet.

If you own a pair of silken pajamas, you can channel Bad Gal RiRi for Halloween. Just make sure your hair and makeup look impeccable, because no matter how dressed-down Rihanna is, her cosmetics and locks are fit for the Oscars.

If you happen to possess a pair of pasties (or some medium-sized stickers) and a significant amount of self confidence, this Miley Cyrus costume is a cinch. Simply put on your pasties, douse yourself in glitter and get ready to party. Let it be noted that this costume is suggested as an indoor ensemble; if you step into a public arena, any subsequent reactions and/or consequences are on your shoulders (and possibly Miley's).

I'm sure that Shia LaBeouf has legitimate reasons for his idiosyncratic stunts, but some of them simply beg to be replicated. Case in point: his red carpet paper bag. Simply cut eye-shaped holes out of a paper sandwich bag, scrawl "I am not famous anymore" across the front in Sharpie, and get ready to go Trick-or-Treating.

Find an old white sheet or an inexpensive white veil, invite over your best buddies, and break out the markers!

So simple is this last-minute costume idea that you only need a pen and your beautiful mug. Following the line of your mouth when you frown, draw a half-circle extending from each corner of your mouth downwards towards your chin. Et voila! Instant Grumpy Cat. Bonus points if you add an oversized hat.

6. LUPITA NYONGO AT THE MET BALL

With all due respect towards both the venerable Lupita Nyong'o, whose acting chops and sartorial know-how are top notch, and to the house of Prada, Nyong'o's netted, feathered Met Ball gown was a bit of a question mark. So when the clock strikes midnight on the eve of Halloween and you have no idea what to wear, simply grab a fishing net from the nearest hardware store, throw on a few feathers and a smattering of glitter, and you have your costume.

If you'd like to channel the biggest Instagram sensation of 2014 aside from the selfie, simply fill a bucket with ice and proclaim yourself the Ice Bucket Challenge for Halloween.

I don't condone the notion behind Dating Naked (the concept being couples who meet and get to know each other entirely sans clothing — do they ever crave a moment or two of privacy?), nor have I watched the show, but it would be ridiculously simply to don a nude camisole and boy shorts with your significant other and celebrate Halloween as a Dating Naked couple.

If you wish to evoke the singularly farcical mess that was the Columbian cycling team uniform, simply throw on a pair of nude skivvies over your most curve-hugging spandex workout ensemble and call it a day.

If you have an oversized, park ranger-style hat in your possession, or even a large sheet of brown construction paper you could craft into a fedora, you're mere moments away from a Pharrell Williams Grammy costume. If you need further inspiration, simply check out the hat's Twitter account, @Pharrellhat.

Because it is never too late to indulge in a Harry Potter reference.

Are you ready for your simplest costume yet? To channel the protagonist of Shonda Rhimes' deliciously dramatic series, throw on your most authoritative neutral-colored pantsuit or trench coat, adopt world-weary expression, and wear a name tag that reads "It's Handled".

If Halloween is just another day on which you wish to be adorkable, throw on your favorite black rimmed glasses (or snag a pair from a willing friend), give your hair a mussed, curly 'do, and pair a vibrant flared dress with your quirkiest pair of flats. Statement eyeliner and pops of pattern are strongly encouraged.

The now-retired talk show host will retain a special spot in television history thanks to her no-nonsense interview style and unabashed love of carousing around Los Angeles, so why not pay the comedian a tribute by channeling Chelsea Handler this Halloween? The look is simpler than you'd think: Carry a martini glass with you throughout the night, throw on a blonde wig, and unabashedly give your companions the third degree. If you succeed in enjoying the evening's festivities to the fullest, you can be assured that Handler would be proud.

If your closet contains what amounts to a head-to-toe pink ensemble, channel Moschino's shocking Mattel-centric Spring 2015 runway. Add a blond wig, a swipe of pink lipstick, and your most spirited grin for a minimum-effort look no one will forget anytime soon.