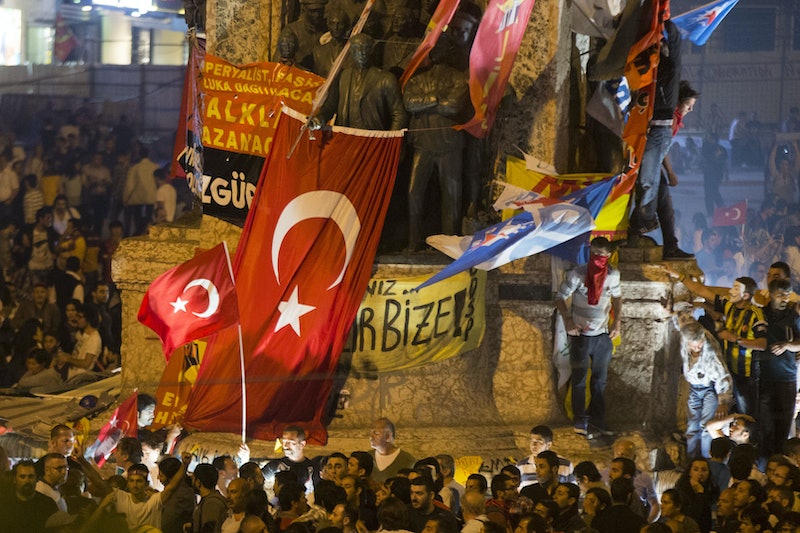 Turkey's Prime Minister Tayyip Erdogan is in the midst of his "worst political crisis since coming to power a decade ago," which may be why he is starting to budge on the issue that has sparked the protests over the last two weeks: a plan to build Ottoman-era-like barracks on the last green space in the center of Istanbul, Gezi Park in Taksim Square.

The Jerusalem Post reports that Erdogan met a group of academics, artists, and students who support the Gezi Park protests on Wednesday, and it seems like there is a possibility of a referendum regarding the plans to build on the park. This is the first sign of the authorities conceding after days of Erdogan saying he will refuse to back down. But on Thursday, Erdogan didn't seem to have changed his tone, warning that his "patience is at an end. I am making my warning for the last time."

A lot of damage has already been done. The casualties from the police force used against protestors by Turkish police include three deaths and roughly 5,000 injuries, according the Turkish Medical Association. One of the deaths includes a police officer.

There is disagreement, however, on whether the police force used against protestors has been disproportionate and excessive. The European Parliament says there has been "disproportionate and excessive use of force by Turkish police to break up peaceful and legitimate protests," while Erdogan maintains the force is defensive. Turkey's PM is certainly under international pressure to prevent more violence on the part of the police and respond to protestors' demands. Whether he'll concede to that pressure, however, remains to be seen.