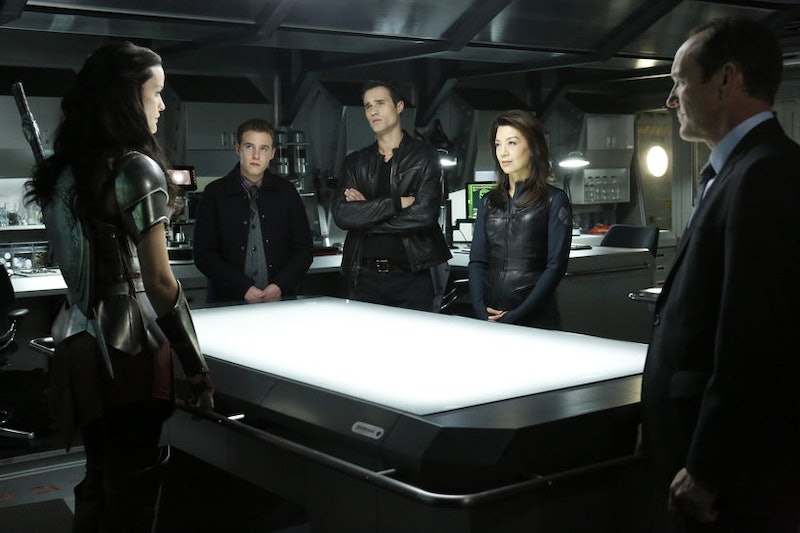 It's hard to describe my relationship with Marvel's Agents of S.H.I.E.L.D. I am a huge fan of the Marvel Cinematic Universe and how they have created a franchise that spans across books, film, and television. I was excited for this show. I continue to be excited for this show because, one season later, I still can't place what it is about Agents of S.H.I.E.L.D. that I don't like. One week, characters bored me. I wanted Simmons off the show. Then, the next week, FitzSimmons had me all misty-eyed. That's not normal, is it? However, when this show works, it is something incredible. I think Agents of S.H.I.E.L.D. has the potential to shine in Season 2, which airs Sept. 23 on ABC. I'll set you up with a recap of Season 1 so you can tune in and decide for yourself.

Agents of S.H.I.E.L.D. is a show about ordinary people who investigate extraordinary events. That's putting it plainly. They are a little bit investigation, a little bit peace-keeping, and a little bit secret intelligence. The team, put together by fan-favorite Agent Phil Coulson, doesn't get along at first. Does any team, really? Where would the fun be in that? Once they learn to work together, they begin to realize that they are all they have.

They made some friends along the way. This includes Agent Triplett, a legacy whose grandfather was a Howling Commando alongside Captain America. They also befriended Lady Sif from the Thor movies. Most of the Marvel movies are referenced in some way, whether it's a piece of technology, a character, or a world-altering reveal. I'll get to that later.

The Evil League of Evil

Early on in the season we were introduce to Ian Quinn, an eccentric billionaire who seems to be collecting supervillains. He's like the anti-Tony Stark. He has so far aligned himself with Dr. Franklin Hall (Graviton) and Donnie Gill (Blizzard). He is affiliated with both Cybertek Technology and The Centipede Group. If you're just tuning into S.H.I.E.L.D., this shouldn't be as complicated as it seems. All of the villains are in some way connected. Just go with it.

The Centipede Group was lead by "The Clairvoyant" — an unseen Big Bad for the second half of the season. Many folks were revealed to be working for The Clairvoyant, but none seemed to have met this individual. We learned that The Clairvoyant is controlling many super soldiers by implanting contacts that give orders and kill upon revolt. One of those super soldiers is Mike Peterson, a single Dad with superpowers given to him by a mysterious doctor. Skye tracked him down right before S.H.I.E.L.D., causing her to get involved. About halfway through the season, Mike Peterson's injuries were replaced with mechanical parts and his true identity was revealed: Marvel Villian/Anti-Hero Deathlok.

Oh, and the Clairvoyant? Turns out he was just a rogue S.H.I.E.L.D. Agent Garret, played by Bill Paxton. He used his clearance to get information on people and appear all-knowing.

Which brings me to the legendary octopus in the room: Hydra As Captain America: The Winter Soldier revealed, the evil organization Hydra infiltrated S.H.I.E.L.D. at its inception after World War II and has been biding its time, waiting to attack. Which is exactly what happened, and Agents of S.H.I.E.L.D. ran with it. Sometimes your coworkers are Nazis. It happens. You probably shouldn't be friends with them anymore. But it does happen. Personally, I'm not into a redemption arc for Ward.

The Big Mystery: What's up with Coulson and Skye?

Besides the gathering forces of evil, Agents of S.H.I.E.L.D. has had one recurring arc that's closer to home. Skye was introduced as an orphan, however, her connection to the Marvel Universe is growing. At one point, she was shot and revived by the same drug used to save Coulson. Yeah, remember how Coulson died in The Avengers? The show doesn't ignore that. Coulson spent a good part of the season discovering the science and ethics of what happened to him. The two are connected, and more will be revealed in Season 2