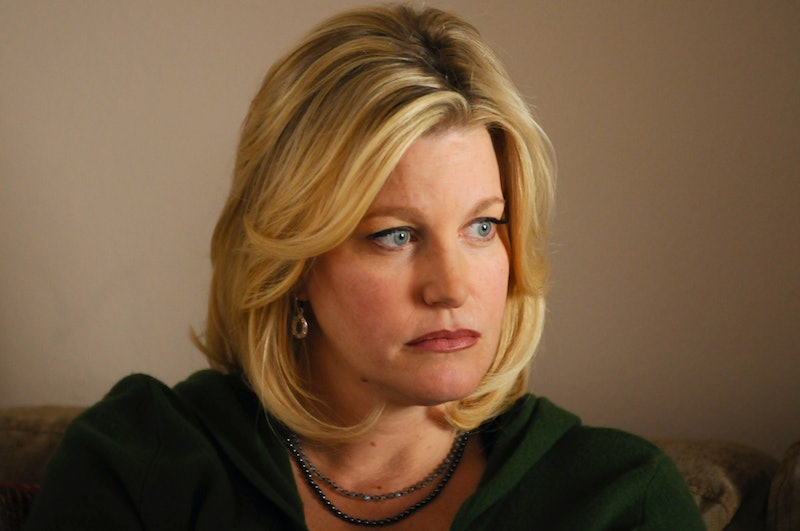 Breaking Bad's Skyler White has been through a lot. She's discovered her husband and father of her children transformed himself from unassuming chemistry teacher into a meth kingpin, has tried (unsuccessfully) to divorce him, and has suddenly become an accomplice in not only Walter White's career in the drug trade, but also in his money laundering scheme. So let us rephrase this: Skyler White has been through enough.

So it seems almost cruel that Anna Gunn, the actress who plays her in the hit AMC series, also has to field hatred from legions of Internet commenters as well. Many have called out the Skyler haters — who characterize the character as a whiney shrew who gets in the way of her husband's drug fun — but it's disappointing that it's gone so far that Gunn has to call them out herself.

The actress penned an op-ed in the New York Times about the Internet hate, which has inspired Facebook groups like "I Hate Skyler White" and, as Gunn notes, "a Facebook page with a name that cannot be printed here." And, in the op-ed, she hits on points that non-Skyler haters have championed for some time. True, Skyler might have become more unlikable as she's become enveloped in Walter's web of lies, but why is she held to a different standard as other television antiheroes, like Tony Soprano, Dexter Morgan, and, yes, Walter White? As Gunn writes:

[Creator Vince Gilligan] and the show’s writers made Skyler multilayered and, in her own way, morally compromised. But at the end of the day, she hasn’t been judged by the same set of standards as Walter ... As a human being, I’m concerned that so many people react to Skyler with such venom. Could it be that they can’t stand a woman who won’t suffer silently or “stand by her man”? That they despise her because she won’t back down or give up? Or because she is, in fact, Walter’s equal?

Gunn's right that "male characters don't seem to inspire this kind of public venting and vitriol." After all, this is a TV landscape in which many Mad Man fans despise Betty Draper so much that their hate extends to the actress who plays her, January Jones. (Never mind that Jon Hamm's Don Draper is philandering in front of his daughter and dreaming about murder.) And, sadly, Gunn is starting to suffer the same fate:

At some point on the message boards, the character of Skyler seemed to drop out of the conversation, and people transferred their negative feelings directly to me. The already harsh online comments became outright personal attacks. One such post read: “Could somebody tell me where I can find Anna Gunn so I can kill her?” Besides being frightened (and taking steps to ensure my safety), I was also astonished: how had disliking a character spiraled into homicidal rage at the actress playing her?

Gunn — an actress who stays out of the headlines far more than Jones — concludes that the hate is not really directed at her, but towards female characters who don't conform to the stereotype of submissive wife. The actress has called Skyler White a "Rorschach test for society," and she's not wrong. Walter White has murdered multiple men, poisoned a child, and watched as a grown woman hopelessly choked on her own vomit, but perhaps the scariest thing about Breaking Bad is the fact that audiences see Skyler as its villain.