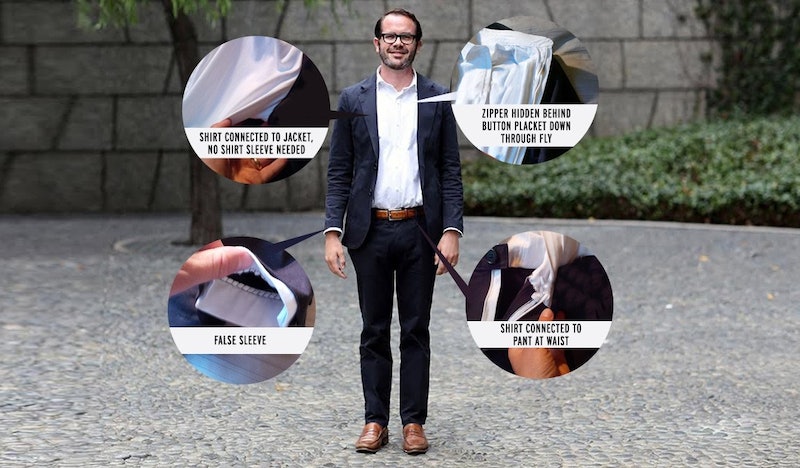 Are you one of the millions of grown men afflicted with Laziness? If so, you probably find getting dressed in the morning difficult. There are just so many steps! There's like the pants and the shirt and the jacket... it's a whole thing. What if you could just zip up the whole outfit all at once like babies do with their spiffy Winnie the Pooh printed onesies? Soon you might be able to do just that. A man named Jessie Herzog has invented the Suitsy, a business suit onesie that allows you to be as lazy as humanly possible while still looking like an adult.

Let me just say right off the bat that Herzog is clearly the greatest genius of our times. We Americans love a product that enables us to act much like a hibernating bear while still accomplishing Life Things like, you know, having a job. The Suitsy looks like a business suit, complete with dress pants, button down-esque shirt, and jacket — all those pesky items that are usually sold separately, to your inconvenience — only it's all one piece.

“Imagine looking professional but feeling like you're in pajamas,” writes Herzog. Okay, I'm listening. He continues, “Consider wearing a suit and a onesie at the same time.” Hmmmm. Call me old fashioned, but I think there's a reason we outgrow the onesie at around age two. John Jannuzi at GQ agrees:

Beau Brummell is rolling in his grave, the French are probably up in arms, and I can't even imagine what the Italians are thinking about all this. Creator Jesse Herzog claims it's a "revolution" and baits you to vote-up the idea with sweet sounding lines: "Imagine looking professional but feeling like you are in pajamas." To that we challenge you to imagine yourself not being lazy and buying a proper tailored suit instead.

I know that might sound to you like the cries of a tone-deaf and aging man who is bemoaning the downfall of "society as we know it," but here's the thing — I totally agree with him (no offense, Genius Jessie Herzog). The idea for the Suitsy is awesome and clever, but in reality it spells disaster for those who value the art of getting dressed.

How lazy are we going to get before we become a population of humans who literally can't do anything besides sit in our beds streaming Netflix and ordering every meal from Seamless? Okay, that's extreme. But, honestly, it's not that hard to put on three distinct items of clothing. Sure, maybe a suit isn't as comfy cozy as a pair of worn-in college sweatpants, but there's a reason you don't wear those to the office.

So far over 1,000 people have upvoted the Suitsy on Betabrand, so it may well become a real thing. I definitely won't be buying it for the men in my life. Also, where's the FEMALE Suitsy, huh?! If you're going to be lazy as fuck, you don't need to be sexist about it.