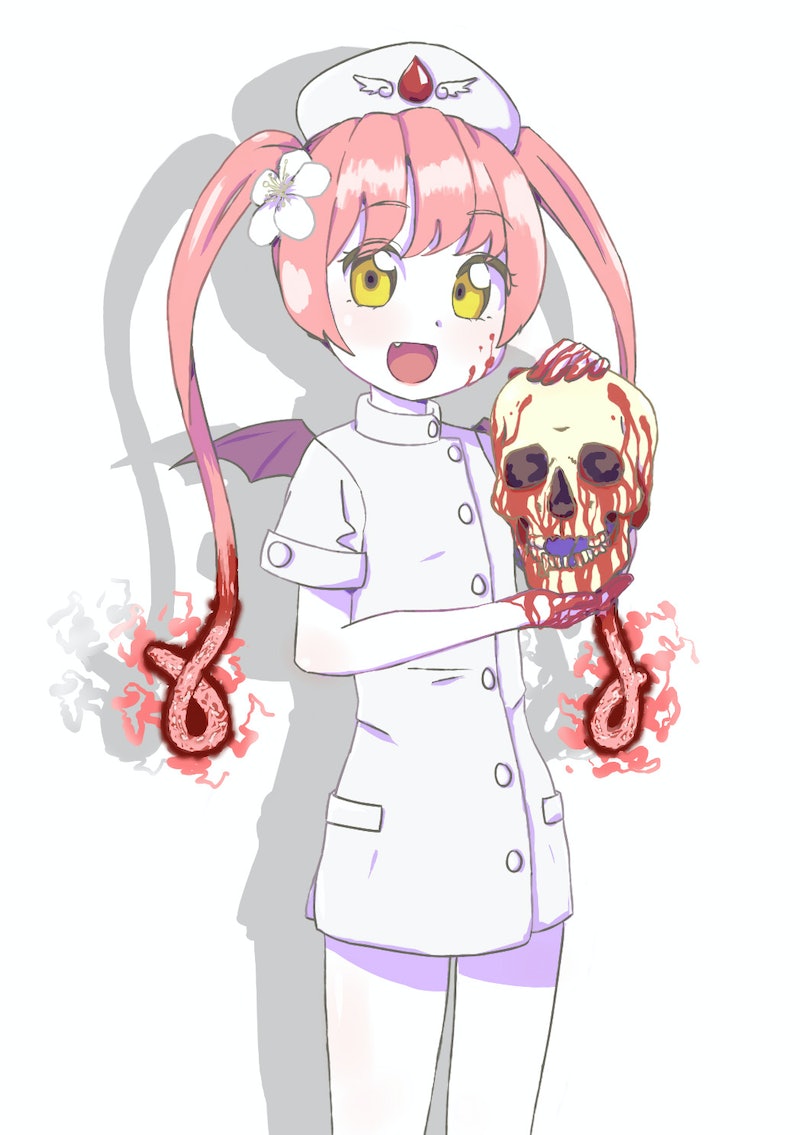 Ugh, 4chan. The Internet community best known for leaking nude photos of celebrities has decided to take on a current global disaster for no other reason than to be the Internet's King Troll. The latest 4chan meme is Ebola-Chan, an anime representation of Ebola (yes, you read that correctly). Because what's funnier than an Internet meme mocking the highly contagious disease that has killed more than 2,000 people in West Africa?

According to The Washington Post, Ebola-Chan originated on the 4chan thread /pol/, a message board of the politically incorrect. Ebola-Chan is billed as a virus-anime-goddess of sorts. Dressed in a white nurses uniform, the pink-haired character acts like a fairy crossed with the Grim Reaper, bringing Ebola and eventual death. 4chan users are expected to respond to Ebola-Chan with glory and praise: "I love you, Ebola-Chan! Thank you!"

By all accounts, Ebola-Chan most likely started as distasteful fan art by someone who didn't fully understand the devastation and seriousness of an Ebola outbreak. But somewhere, somehow, Ebola-Chan developed into a full-fledged conspiracy hoax. Soon enough, 4chan users began posting racist comments and conspiracy theories whenever Ebola-Chan popped up on a thread. One popular conspiracy floated around the board was the idea that Ebola was created by white people to destroy all the nations of Africa.

And it seems like some 4chan users really wanted to start trouble, considering some of the comments:

If we keep it up, soon enough some African media will report it and people will start to spread the word that Ebola might be beign spreaded [sic] by the white devil and that’s enough to help Ebola-chan.

According to Vocativ, the 4chan users' ploy worked. Ebola-Chan made its way onto the Nigerian message board Nairaland — presumably with the help of 4chan — and the conspiracies firmly took hold. Nairaland users began posting about how Western nations were purposely spreading Ebola to West Africa and using "voodoo magic" on Ebola victims through the mythical Ebola-Chan.

They hate Africans and worship an ebola demoness who they call "Ebola-Chan". They perform magical rituals in order to spread the disease and kill people. They target the area they want to infect next using blood sacrifices ... Apparently even some Ebola doctors are part of the cult and instead of treating the disease are deliberately spreading it. I even heard rumour that they eat the heart of victims because they think it grants magical protection though I don't know if that's true

Although it sounds ridiculous, anything can go viral on the Internet — and this Ebola-Chan conspiracy theory did. And of course, the ill-guided 4chan users are responding with delight, according to Vocativ. "Keep the racist comments coming" must be a 4chan motto.