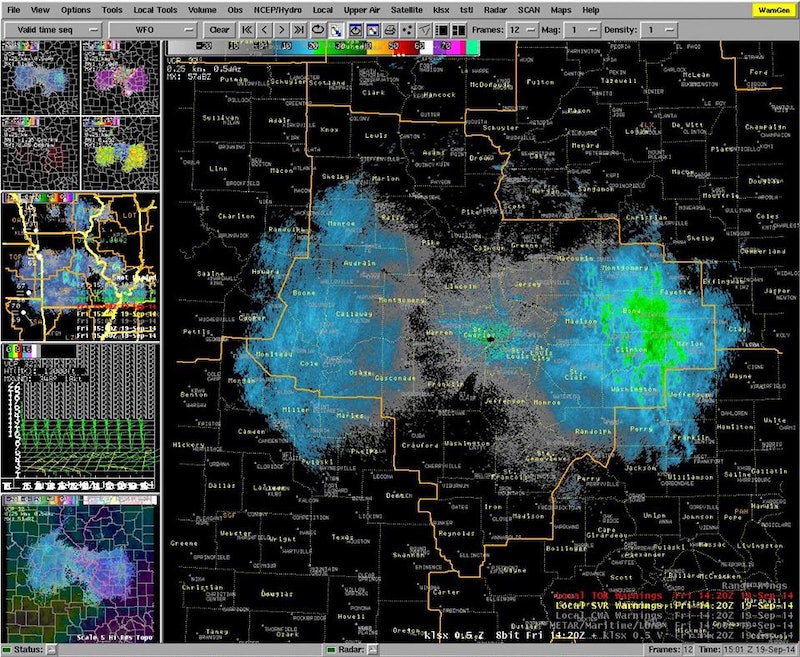 Last week, meteorologists noticed a large cloud formation moving in unusual patterns over St. Louis, Missouri. Though it was constantly changing shapes as it moved toward Mexico, the formation maintained the outline of a... giant butterfly. And behold: It turns out that the giant cloud over St. Louis was butterflies — a gigantic swarm of migrating monarch butterflies. It may sound bizarre, and even kind of terrifying — but for the endangered monarch butterfly, it's actually a good sign.

On Friday, the U.S. National Weather Service posted on its Facebook page the St. Louis office's report of the butterfly cloud:

We think these targets are Monarch butterflies. A Monarch in flight would look oblate to the radar, and flapping wings would account for the changing shape! NWS St. Louis wishes good luck and a safe journey to these amazing little creatures on their long journey south!

But it's not all good news for this species of butterfly. Look no further than the Endangered Species Coalition's Tuesday report titled "Vanishing: Ten American Species Our Children May Never See," in which the monarch butterfly is listed. The report details the lethal effects of pesticides used by Big Agriculture, like the weed killer Roundup. (It even sounds menacing, doesn't it?)

Millions of pounds of the toxic herbicide is sprayed on genetically modified crops, killing the milkweed that grows alongside them.

Unfortunately, milkweed is the only crop that monarch caterpillars can eat, —and as a result of its decimation, the once-thriving monarch butterfly is disappearing.

The report also states that the monarch butterfly population used to be as many as a billion, but today it's dwindled to only about 33 million. At the rate that they're disappearing, it's possible that they'll be extinct within our children's lifetime.

As fragile as they are, these butterflies travel thousands of miles each year, from as far north as Canada to California and Mexico.

But. As the enormous cloud formation over St. Louis indicates, the monarch butterfly hasn't gone anywhere yet.

More like this
If You Have Pets, You Probably Don't Realize You're Making These Common Mistakes
By Mackenzie Edwards
The 5 Best Brushes For Short-Hair Dogs
By Tiana Crump
'Waterloo Road' Is Back, With More Than A Few Familiar Faces
By Sam Ramsden and Vivian Iroanya
Mollie King & Stuart Broad Just Shared The First Pic Of Their Baby
By Sophie McEvoy
Get Even More From Bustle — Sign Up For The Newsletter