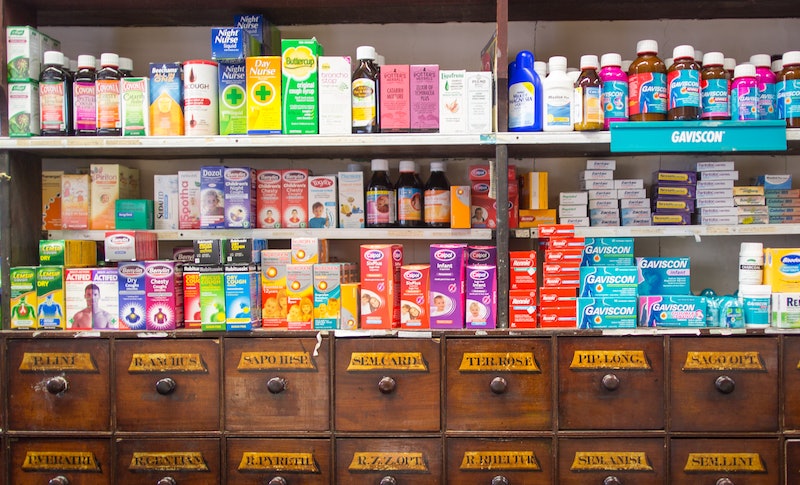 Back in the day, people used to purchase illicit substances at their local drug stores like it was NBD. How, you ask? Because back then, it wasn’t uncommon to find ingredients like “morphine” — a.k.a. heroin’s slightly classier cousin — in the products one would find in the cough and cold aisle. Take One Night Cough Syrup, for example: it contains active ingredients like alcohol, “cannabis indica, F.E.,” chloroform, and “morphia, sulph.” Yeah, sounds more like a night at Studio 54 than a sick day with Netflix to me.

According to Neatorama, One Night Cough Syrup was the subject of a legal case from 1934 in which the FDA ruled the drug’s “claims of its therapeutic properties” were misleading — because, you know, most of its main ingredients are highly addictive, harmful substances.

Don’t believe me? Take a look at the cough syrup’s label:

Unfortunately (or fortunately to any hard-partiers out there with access to a time-traveling Delorean), One Night Cough Syrup wasn't the only laced-with-illicit-drugs medicines on the market decades ago. According to Alternet, there were several medicines and refreshments out there intended for "healing" people that also happened to contain now-illegal substances. Want to know more? Here are a few items you could find in a drug store several decades ago that would, well, get you pretty high (or worse):

Aside from One Night's variety, there were several other cough syrups out there that contained more than a cocktail of alcohol, chlorophorm, THC, and morphine. Like Dr. J. Collis Browne's "Chlorodyne," which, according to Alternet, contained laundanum ("an alcoholic solution of opium"), cannabis, and chloroform. Also, Business Insider mentions that Bayer used to market "Heroin" as a cough and "irritation" remedy for children. (Facepalm).

Bayer used to market "Heroin" as a cough and "irritation" remedy for children. (Facepalm).

The rumors are true: there was a time when Coca-Cola actually contained cocaine. Yep, the New York Times notes that the famous beverage, originally described as a "brain tonic and intellectual beverage," once included the narcotic as an ingredient. However, it was eventually removed from the soda's formula after the turn of the century (for obvious reasons).

Oh yes, a long, long time ago, one could purchase drug-laced French wine — because, you know, getting drunk wasn't enough! Pharmacy Techs reports that Metcalf's Coca Wine contained more than just fermented grapes: it included cocaine as well. According to Alternet, Vin Mariani also came out with a cocaine-infused wine that contained 7.2 mg of cociane per ounce. Yikes!

Yup, even the alleged "cures" for drug addiction were laced with, you guessed it, drugs. Alternet notes that Habitina, labeled as a cure for "drug habits of all kinds," included morphine and heroin as ingredients. (Shakes head.)

These products are only the tip of the iceberg when it comes to the insane drug-laced purchases one could make at a drugstore back in the day — which makes you wonder: what are people going to be writing about the OTC drugs and refreshments we're consuming a hundred years from now?